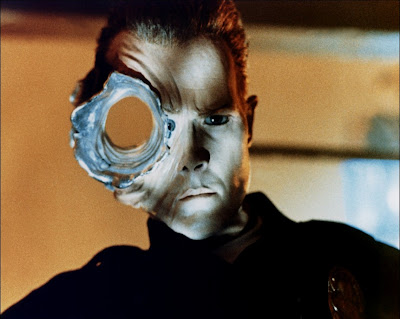 By all that's holey ... Is it really twenty years since I sat on the balcony of the Odeon Coventry for the midnight preview of T2?  There was me and about 499 'close friends', all clad in the de rigueur leather jackets (Coventry was a biker town and a student town ... which lead to a lot of leather being worn in the early 90s).  There wasn't a drop of oestrogen in the building.
Now, ordinarily I'm an anti-social bastard and hate watching films in crowded cinemas ... But this was different.  this was a film that demanded an audience!  To see the film without the electricity of the group response, was to see it with a major ingredient missing.
It was, at the time, the most hype and most anticipated film I'd ever seen.  This was in a time before the internet and the 24/7 Rumour Mill ... But it was also a time when earth-shattering block-busters appeared once or twice a year, not once or twice a month as now.
As I write this, on Friday, everyone is either ranting or raving about Transformers 3 but, in two weeks, the final Harry Potter film is unleashed and the talking cartoon robots will be forgotten.  In truth, they'll be largely forgotten about by Monday.
T'wasn't so twenty years ago.  Back then, a film lived in your mind for months.  But, even by that measure, Terminator 2 was something special.  It still lives in people's minds.   My youngest was five years not-yet born when it came out and yet, even today, he says "Hasta la vista, baby" to his mum when going out to kick a ball around with his mates.
Not many films get burnt that deeply into the psyche of generations of audiences.

And what kicked-off this bout of introspection?  Finding a video.  It's made by a Swedish duo, a musician and an animator, who call themselves Rymdreglage or, for those who can't get their tongues round Swedish ... Ninja Moped.
They have a real vision, eccentric, dedicated and individual.   Their videos show that you don't need masses of money, just inspiration and patience.  In that sense they are the binary opposite of James Cameron's films which, of course, celebrate astonishing expense.  But that binary opposition is, I think, perfect.
This film is both a post-modern celebration of Terminator 2, but also a document about the art of animation.   Which, in itself, is only right since T2 was the first film which wove animation so seamlessly into its live action that no special effects movie from then on could afford not to be, in part, an animation.
This is, I feel, quite wonderful and that is why I wanted to share it with you.
If you want to see more of their delightfully dotty videos, go no further than here.
Posted by Cellulord