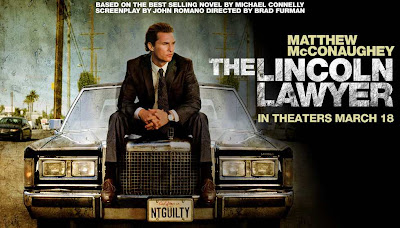 So, you have an opinion on Matthew McConaughey, don’t you!  Everyone does.  After the better part of a decade appearing in films which are, at best, undemanding and, at worst, just plain awful, he has become something of a joke around Hollywood because he just can’t seem to keep his nipples off screen.
Now, aged 42, McC (as I’ve decided to dub him) clearly thinks it is time to be taken as seriously as he fifteen years ago so, once again, he has slipped into a lawyer’s loafers for The Lincoln Lawyer.  Mick Haller is a slick, cynical wheeler-dealer of a defence lawyer whose office is the back seat of his thirty year old Lincoln Town Car (with the number plate NTGUILTY) because, like the shark he resembles, he has to keep moving and all his clients, whether they did it or not, walk free after hiring him.
Except one.  The one case that will come back to haunt him is that of Jesus Martinez, who was found guilty of a brutal murder and was destined for Death Row before Haller’s manoeuvrings had him committed for fifteen years instead.  He considers that a result, initially, but events eventually make him reassess.
And when I say ‘eventually’, I mean it!  Boy, does the first hour of this film drag.  We spend far too long being introduced to his complicated life and the wide range of characters who live in it with him.  The film is written in such a way that every single incidental character and every single off-hand line of dialogue will come in handy during the film’s second half.  The problem with that is that the astute viewer or experienced fan of courtroom dramas will know where and why a lot of this detail will matter.
But worse than the confusing structure of the first hour is the fact that McC plays Haller as a total dick throughout.  Then at the mid-point, when he gets his epiphany (right on cue) he changes; he realises he made a big mistake with the Martinez case and has to do something about it.  Problem is, we’ve spent a whole hour not liking or not caring about him, so McC suddenly has to work doubly hard to earn our sympathy.
TV shows like Shark and Boston Legal and, before that, The Practice, have shown that you can take the overly-familiar trappings of court-room drama and turn them out weekly, yet still make them compelling.  A major motion picture has to step-up to this high bar and get over it in pretty impressive style.
The twist is that Haller so dislikes his client that he actually wants to lose the case, but still has to do his best work.  Hang on, though, wasn’t that also the case with Al Pacino in … And Justice For All and, for that matter, Jim Carrey in Liar, Liar?
So, you see, with McC struggling to be taken seriously and the story struggling to feel original, it’s an uphill struggle.  It’s to his credit that we do give a damn by the film’s closing act!  And it could all be saved if they could just pull off that moment we wait for in all court-room dramas, that tingle of excitement you get when the canny cross-examiner springs his trap: The ‘You Can’t Handle the Truth’ Moment.
Do they manage it?  Almost.  Does this lift this film above the mediocrity of being just another mid-list drama?  Not quite.  Is the revelation worth two hours of watching Marisa Tomei wandering around in the background wondering what she’s there for?  No.  Is it worth it for the brief glimpses of Michael Paré (who, apparently, isn’t dead after all), or William H. Macy or Bryan Cranston without his beard; or even for another one of John Leguizamo’s blink-and-you’ll-miss-him cameos?  No, no, no and no.
Are the extras on the disc worth it?  Well, let’s have a look, shall we:
EXTRAS:
To their credit, the extras concentrate on Michael Connelly, the writer of the source novel, and he is a fascinating individual … Not quite as eccentric as Eddie Bunker or James Ellroy, but heading that way!
Making The Case: 13.30
This is an interesting but fairly standard telling of how the novel became the film which considers the age-old problem of turning a 400-odd page novel into a 120 page script and how much of the novel must be lost.  McC has a nice way of encapsulating this when he says the film is like the ‘greatest hits’ of the novel.
Michael Connelly – At Home on the Road: 10.00
This accompanies Connelly as he drives around his beloved LA, introducing us to the locations that inspired the book (as well as the apartment that he bought because Raymond Chandler once lived there).
McC and Connelly – Face to Face: 5.30
This is a smarmy love-in which is almost as uncomfortable to watch as Connelly clearly feels about being in it.
Deleted Scenes: 4.40
Although these do explain why Earl, Mick’s driver, disappears in the middle of the film, and where the rap music we keep hearing actually comes from, these don’t add much especially important to the film.  Sadly, they aren’t the only scenes that should have been deleted from this overly-long, overly-formulaic drama.
Over-all, then, the extras are nothing to write home about.  There’s no audio commentary, very-little on-set footage and very little insight into the process.
And for those keeping score:  McC Nipple Count: 1!
Posted by Cellulord