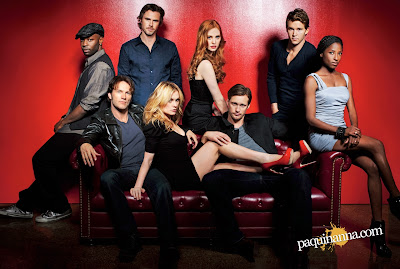 Episode one was all about introductions and getting us used to the new, upgraded True Blood 4.0 … There was fun to be had with the way they had shaken up their world, but now they have to get going and tell some stories.  There’s witches and faeries out there and they mean nothing good for little ole Bon Temps.  The various threads of what, I trust, will eventually resolve into one story have been divided up between small groups of characters and, since it’s early days yet, we can’t really see where many of them are going.
King of Louisiana, Bill, is enjoying issuing orders to his sheriff, Eric, and is starting to hatch his own plots.   He has also reverted to his old habit of having what – and, pointedly, who – he wants.  But it’s all a front, he still drops everything (and everyone) when Sookie calls and when she tells him she doesn’t want to know his secrets any more, that clearly stings him.
But it also throws him into deep introspection and allows us to know this particular secret through a handy dandy little flashback.  Playing to the crowd, we get a scene that will particularly please the Goths watching (I believe there may be a few) as we travel back to a seedy London nightclub on punk night in 1982.
Enter Bill, all spiky hair, black eye-liner and greasy biker jacket.  This sequence is particularly delightful because it affords Stephen Moyer the chance (however briefly) to use his actual Gor Blimey Guv’nor accent.  No, he isn’t channelling Dick Van Dyke, that’s his real voice!
We also get to see the culmination of his battle with the Queen from the end of series three, and, more importantly, learn the reason behind it: A reason that stretches all the way back to that night in 1982.
Sookie’s main dilemma – which, given what she’s been through hitherto, seems like nothing more than a thorn in her side – is that Eric has bought her house and now claims to “own” her.  Not because he actually wants her, you understand, but simply so Bill can’t have her.  Doesn’t matter how many centuries these vampires walk the Earth, they seemingly never grow up!
In the post-Russell Edgington world, campaigns against vamps have taken a huge leap in popularity – meaning the inevitable divisions between the two schools of thought within Bon Temps are going to become galvanised.  Since there’s a crowd outside Fang-Tasia chanting Steve Newlin’s name, it seems inevitable that he’ll be back, just as smarmy and sanctimonious as before.
I suppose, when you have such a crowded cast of characters, all pursuing their own, distinct (if overlapping) stories, you are going to burn through a lot of storylines.  There are, reputedly, only seven distinct story-lines (Man versus Man, Man versus Nature, Man versus Himself … etc) so it’s only reasonable to expect, in the fourth year of a series that goes through stories like a vampire through breath-fresheners, that you’re going to get a certain amount of repetition.
Therefore, there is the whiff of familiarity as Jessica and Hoyt settle into domesticity, with all of the misunderstandings, arguments and disappointments idealistic young lovers will encounter.  As Jessica becomes more and more predatory, their off-and-on relationship is headed once more into familiar soap-opera territory.
As for Arlene and Terry’s baby, well isn’t he just the cutest little reincarnated serial killer ever?
Sam Trammell has, I suspect, been working out a lot this year, since his character, Sam Merlotte, seems to spend a lot of time naked!   And why shouldn’t he: He is genuinely happy with Lola his shape-changing girly-girl but, of course, in the melodrama that is serial television, this clearly isn’t going where he thinks it’s going.  But quite what traps the writers will lay in his path in the next few weeks is still enjoyably unclear.
Meanwhile, Jason also finds himself in bed – but not in a good way – as he’s chained up with a gun pointed at his head.  He begins to feel that his infatuation with Crystal may have been a dumb idea and, let’s be honest, Jason’s Dumbest Idea is a pretty crowded category.  Never-the-less, the one genuine shock in this episode is delivered by this story right at the very end.  I really want to know what’s gonna happen to poor Jason next.
Bill’s main concern is the coven of Necromancers in the back room of the local Wicca shop, into which Lafayette and Jesus have wandered.  Bringing dead things back to life has interesting consequences for vampires. 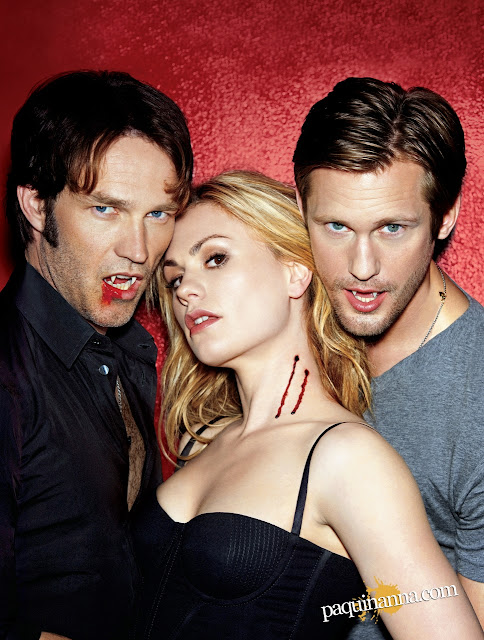 Acting-wise, I still think Moyer demonstrates a far greater range than Alexander Skarsgård.  The big Swede continues to be great at wearing vests and has now at least lifted his head up so he’s not looking through his eyebrows all the time, but his performance is such it’s still difficult for me to be scared of him.  He doesn’t seem to take seriously what he’s saying, which makes it hard for me to.  I imagine he’ll be a fine comic actor if he ever gets the chance - and the predicament he finds himself in by the end of this episode may well, deliberately or otherwise, be the opportunity he was looking for.
Now Jason has learned to stand up for himself he doesn’t get to pull that fetching confused-bunny-in-the-headlights face that sustained him through series 1 and 2 but, by the end of this episode, it’s back … Only this time it’s being worn by Eric when he looks blankly at Sookie and asks who she is.
Amnesia?  Really?  Isn’t that one of those story-lines that TV shows use when they’ve run out of better ideas?  Didn’t they do it to Captain Kirk in the reviled third series of Star Trek?  Oh dear …  Beam me up, Sookie.
Posted by Cellulord