I’ll assume you did actually watch series 3 but, like me, you’ve probably forgotten a lot of it.  As final episodes go, ‘Evil is Going On’ was fairly short on spectacular dénouement but very heavy on loose ends to tie-up this year.
So, in no particular order: 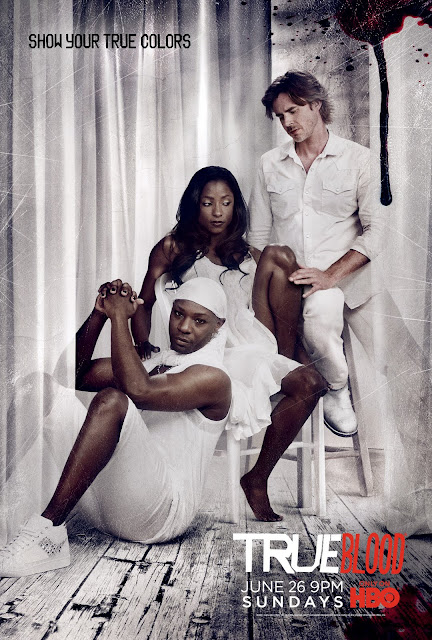 Lafayette (Nelsan Ellis) was pretty much in a holding pattern all last season, developing a relationship with Jesús (Kevin Alejandro) who, finally, confesses he is “a witch” which quite delights Lafayette.
Sam (Sam Trammell)’s back story has risen up and bitten him, meaning he has family matters to deal with that culminate with him shooting his brother, Tommy (Marshall Allman).
Jason (Ryan Kwanten)’s infatuation with Crystal the were-panther has resulted in him being left in charge of a clan of inbred hillbilly shape-shifters.
Tara (Rutina Wesley) has cut her hair, made peace with Sam and seems determined to stop being a victim.  She wants to be “a completely new person”
Jessica (Deborah Ann Woll) – Bill’s ‘progeny’ - has finally come to terms with being a vampire, and with the fact that Hoyt (Jim Parrack) loves her no-matter what.  They have moved in together.
Bill (Stephen Moyer) has had a spectacular falling-out with Sookie - again - and has now been replaced in her light-switch affections by Eric.  This has changed him:  Having attempted to ‘kill’ Eric, he was last seen flying and fighting with Queen Sophie-Anne because he has, he claims, nothing left to lose.
Eric (Alexander Skarsgård) buries a barbecued Russell Edgington (Denis O'Hare) in cement (but he isn’t actually dead, so don’t be surprised if, like Being Human’s Herrick, he doesn’t reappear) then sticks the stake in Bill and Sookie’s relationship before returning home.  He also now has hallucinations of his progenitor, Godric (Allan Hyde), glowing all Obi-Wan like.
And Sookie (Anna Paquin)?  Well, she’s discovered that she’s part Faerie and that her blood is “vampire crack”.  That should ensure that her motto continues to be: “When am I not in trouble?”
Also rattling around in the mix we have the sexy werewolf Alcide (Joe Manganiello), the Wiccan waitress Holly (Lauren Bowles) and human/vampire relations advocate Nan Flanagan (Jessica Tuck).
So, without further ado: 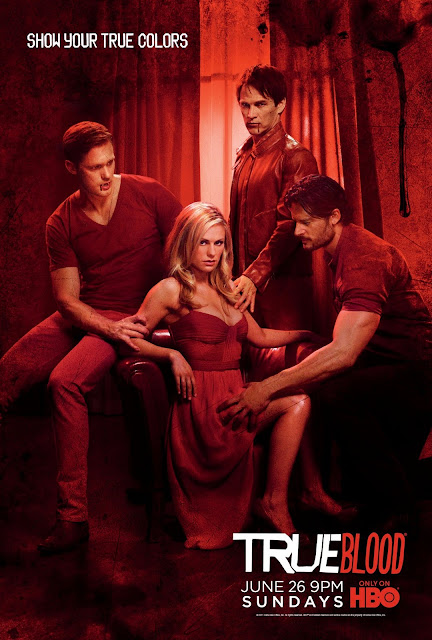 I haven’t read the fourth Southern Vampire Mystery: Dead To The World, that this series will be loosely based upon, so I’m coming at it cold.  Cold blooded, you might say.
‘Bon Temps’ roughly translates as ‘good times’ and, if the first act of this opening episode is any guide, they are having a good time with Time this year.
When the episode begins you would be forgiven for thinking you had fallen through a hole in Time and were watching Star Trek: Next Generation.  We open with beautiful people in classical gowns wandering round an obvious studio set, plucking glowing fruit off trees and generally acting all Olympian.
Then Sookie arrives and, inevitably, Heaven promptly goes to Hell.
She soon finds herself running through terrain that is not dissimilar to The Vasquez Rocks, being pursued by Mab, The Faerie Queen.  More from her later, no doubt.
We also get a brief cameo from Gary Cole who seems to have his own relationship with Time, since the fella clearly hasn’t aged a day since appearing in American Gothic some fifteen years ago.
But all this is by way of a starter, just to get the juices flowing – then we get to the main course: Sookie’s homecoming.
Although she has only been gone eight or nine minutes, a curiously precise twelve-and-a-half months have passed in Bon Temps and a few things have changed, but not Bill and Eric’s petty point-scoring “He gave up on you, I didn’t” type stuff.
Otherwise, show-runner Alan Ball has taken the chance to re-set the clock on the show, possibly as a result of the fan dissatisfaction over the end of season three.
Bill’s fight with The Queen obviously ended well as he’s still out and about and now has some political clout.  His charm offensive with the humans is cleverly intercut with Eric smarming into a camera and reassuring television viewers that not all vampires who appear on TV are going to tear out your spine.  Yeah, this is definitely the show to demonstrate that! 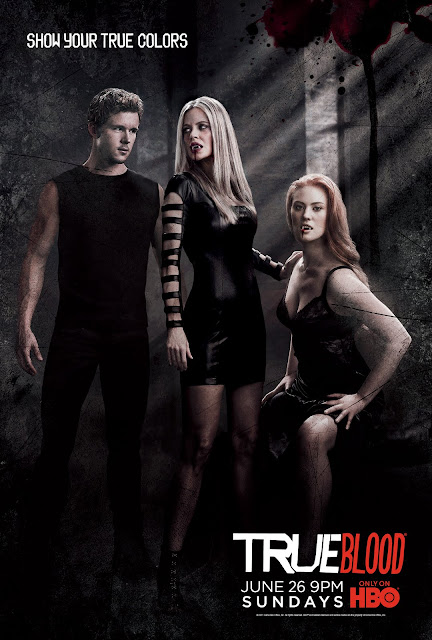 Elsewhere, Arlene’s had her baby which is remarkably well developed for its, what, nine months or so?
Tara.  Boy has Tara changed.  She’s spent her year productively and she’s hopefully going to be a much more dynamic character this year.
Now we have an established culture of witches as well a whole dimension full of Faeries to add to the mix and I can’t help but find myself noting how similar to the Whedoniverse everything is becoming, with a new supernatural species lurking around every corner.  I’m waiting for a green-skinned crooner to show up.
Of course, the sheer size of the cast and the number of plot-lines are reminiscent of Lost or Fringe – both of which have had fun playing with time and parallel dimensions.  So, it’s a shame that, with this first episode at least, the show has lost its unique voice.  But at least the buffet of plots available ensures that there will be something to everyone’s taste.
So, this is essentially the pilot of a whole new show, taken-up with introducing a whole new cast of characters.  They look like and sound like the characters we know, but they don’t necessarily behave like them.
There is fun to be had, seeing how they have shaken things up and discovering how the characters have changed, but it’s a once-only buzz.  Now they have to get on with the very serious business of telling a lot of stories quickly and well.
Fortunately, during the show’s last five minutes, all the introductions done, things start to move.  The world of True Blood is getting bigger, more complicated and, yes, more dangerous.  One wonders how much longer all of this activity will continue to gravitate around the little town of Bon Temps.  Only Time will tell.
You'll also find this article published by Obsessed With Film, here.
Posted by Cellulord