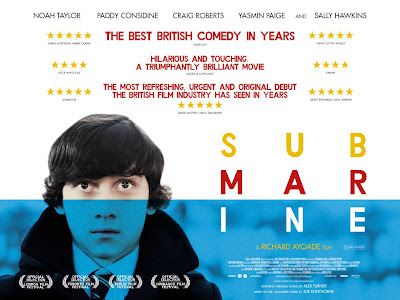 This is a film (based on the novel of the same name) about a teenager called Oliver, awash on a sea of hormones and confusion.  This is not, it’s fair to say, unexplored territory.  From Catcher in the Rye via The Breakfast Club to Juno, you will find many brilliantly observed and painfully true depictions of the terrible teens.
There are so many rites of passage films depicting the shedding of childish things that you’d be forgiven for thinking there was nothing new to say about it but, as with silly love songs, we don’t seem to have had enough.  And I am grateful for that because Submarine is wonderful!
The movie that I was mostly put in mind of is Bill Forsyth’s Gregory’s Girl (1981).  And that’s about as fine a complement as I can pay a British teen movie.  Part of the reason for the comparison is that Submarine seems to be set in the eighties.  There’s nothing that overtly tells you this … But the absence of mobile phones and laptops and the presence of video tapes and Paddy Considine’s mullet would seem to suggest that!  Also, it is that point in the eighties when some people still hadn’t quite got over being in the seventies.
Thing is, that’s the time I was trudging through the ignominies of teenage.  So, unlike y’r modern teen who LOLs and LMFAOs their way through life, experiencing everything vicariously through their constantly updating social networks whilst growing a thick skin of cynicism; I remember having to make my mistakes myself and having to figure out how and why I’d made them alone.
We were a sadly solitary lot, the teenage boys of the 1980s.  Similarly, Oliver (Craig Roberts) lives in an isolated world largely of his own imagining.   He agonises about being invisible to girls but, in his mental experiments, he imagines being dead would be a good career move because he would then, in his absence, become the centre of everyone’s attention.
Rather like Adrian Mole (also from the eighties) Oliver is well-read and erudite but has no life experiences to elucidate with his wide vocabulary … So, in the absence of an incident-filled life, he makes things up. 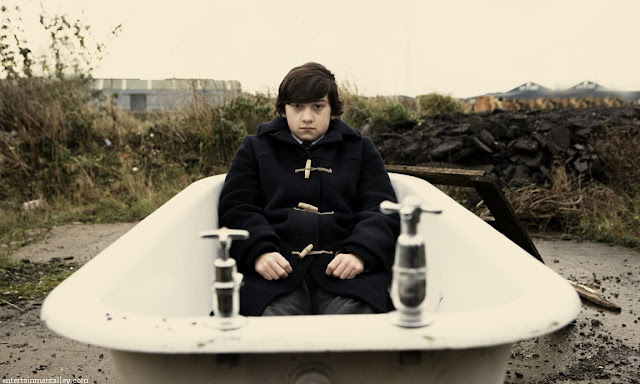 As children will, he tries a bit of everything.  Tired of being bullied, he tries a spot of bullying himself, just to see if it agrees with him and will impress Jordana, the girl on whom he fixates.  He has the ability to rationalise any behaviour to himself – including spying on his parents to the point when he knows, to the day, when they last had sex … Some seven months previously.
So far, the film probably doesn’t sound especially new or unusual … But writer / director Richard Ayoade (who you will, of course, know as Moss in the I.T Crowd) has created a beautifully visualised depiction of mundane alienation.  There is a clever economy of shooting here and Ayoade even allows the editing to carry the gag occasionally.  That shows real maturity but, it’s worth mentioning, whilst this is Ayoade’s first movie, it isn’t his first time in the director’s chair:  His first screen credit, Garth Marenghi’s Darkplace was as co-writer and director as well as co-star!
Whilst the whole film is seen from Oliver’s perspective, making him very much the centre of things, he is surrounded by great oddball characters:  His rigid, perpetually-embarrassed middle-class parents (played by Noah Taylor and Sally Hawkins), Graham, the mullet-wearing Ninja neighbour (Paddy Considine) and, of course, the frosty presence of Jordana herself (Yasmin Paige).  All of these characters are layered and complex and portrayed with the lightest of touch by an inspired cast.
Visually, the film is full of unobtrusive but beautiful tracking shots, with the camera flowing effortlessly through the wintery Welsh wilderness, making it look quite magical; even if this does lead to some rather self-conscious referencing of Francois Truffaut.  Hey it’s nice, for once, for someone to not be referencing Spielberg or Tarantino! 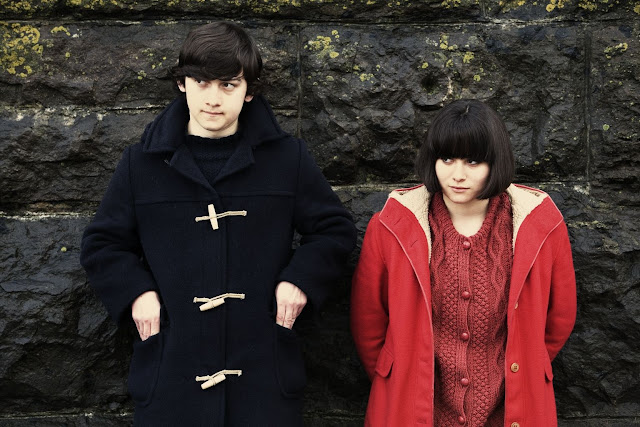 Oliver’s eccentric, experimental relationship with Jordana, conducted almost exclusively out-of-doors in duffle-coats, is made up of perfectly conceived vignettes, often gathered together in delightful little montages.  Like any miniature, the details are absolutely crucial in this small film, the humour is gentle and heartfelt but the themes, they’re universal, and here played out to the accompaniment of Alex (Arctic Monkeys) Turner’s simple, soulful songs.
As the film progresses into its third act, we do begin to lose sympathy with Oliver.  His rationalisations become quite cruel and self-serving, but this is because he is still a child, unfamiliar with and unsure of how to cope with the emotions he feels.  It is quite brave of the film to not gloss over this and not try to idealise Oliver.
What about that title, then: Submarine?  Well, apart from the submarine Oliver has painted on his bedroom wall, this is mainly a reference to his discovery of sonar.  Using sonar we can detect what is going on inside a hard metal object.  Oliver’s fear is that there is no sonar for people, no way of being able to detect what is going in on in the human heart.  Of course, we do develop that sonar: It’s called empathy.
One has to experience teenage traumas in order to develop that empathy.  That is the point of a coming-of-age story and that is the key difference between a child and an adult.  We can enjoy the humour, understand the human drama and be moved by the emotions precisely because we have been through that rite of passage and can now empathise with those who are still struggling through it.
Fortunately, watching this film is very far from a struggle.  It may just be my film of the year!
THE EXTRAS:
Audio Commentary – This is the best extra by far.  Featuring Ayoade, of course, as well as the original novelist, Joe Dunthorne (I love it when novelists get this involved in a movie adaptation) and Director of Photography, Eric Wilson, who does extraordinary work with the seemingly impossible task of making midwinter Wales seems like a place you actually want to be.  A great excuse to watch the film again straight away! 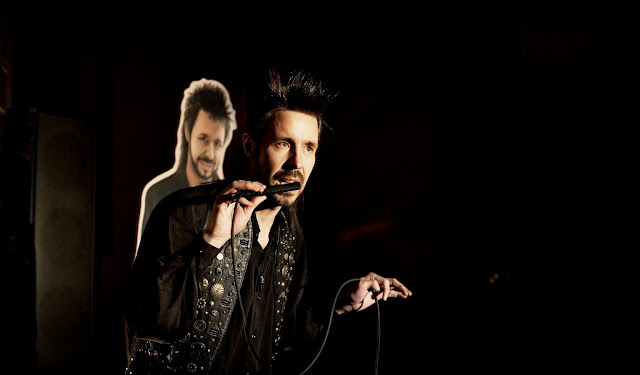 Through The Prism – 16.00
This is the self-help video that Graham T. Purvis (the Ninja neighbour) flogs at his ‘seminars’ and parts of which we see peppered through the film.  It is essentially Paddy Considine improvising in character.  A bravura performance, to be sure, but the joke does wear thin.
Message From Ben Stiller – 2.00
A heartfelt pep-talk video from Ben Stiller, sitting in sun-kissed LA, sent to the film-crew entrenched in Wales in the rainiest month on record.  He certainly feels their pain.
Interviews – 24.30
EPK (Electronic Press-Kit) interviews with all the main stars.  Feel free to add your own questions then howl with laughter as the cast answer a completely different question.
Deleted Scenes – 9.40
One of the joys of the film is its cracking pace and economy.  These scenes would, almost without exception, have slowed things down.  They do, however, fill-in some of the details about Oliver’s dad who is, to be frank, only sketched-in as a character in the film.
Extended Scenes – 4.50
Ditto
London Comedy Festival Q&A – 10.00
Seemingly shot by an iPhone, this gives an impression of what the Festival screening must have been like, for those people trapped at the back who couldn’t hear.
Glasgow Film Festival Q&A – 11.40
This one is better and more coherent, although Ayoade does seem to be a bit nonplussed at being asked questions about his film.
Camera Test – 3.50
This is a run-through of the key under-the-bridge scene, with different hair and an unattractive mack instead of the duffle-coat.  Those tiny details really do matter! 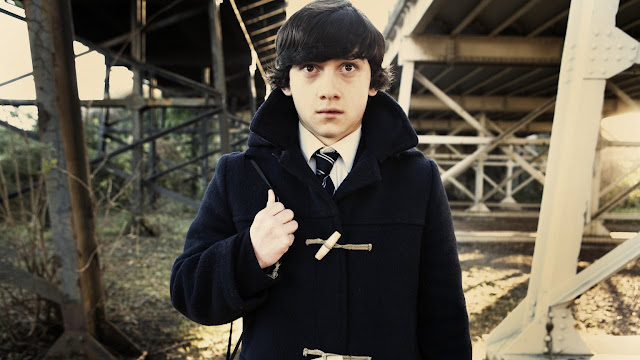 Piledriver Waltz Video – 3.20
The video for one of Alex Turner’s songs, made up of seemingly unused montage material from the film.  Quite delightful!
Posted by Cellulord