DOCTOR WHO: Vampires in Venice 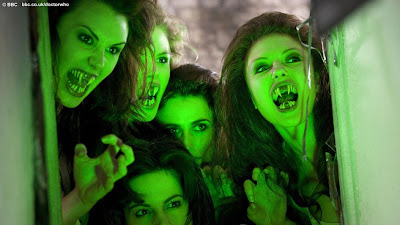 Well, we’ve had werewolves and mummies and Frankensteinian hand-made chimeras so, I suppose, vampires were inevitable.  Having them in such a gorgeous location was not.
This episode uses its European locations very skilfully.  The Doctor Who trip to foreign climes has obviously become a bit of a tradition for the new show and, provided they continue to make such good use of the locations they find, I’m heartily in favour of it.  Licence fee concerns be damned; I’d rather they spent my £150 on a foreign holiday for the Doctor Who crew than putting it in Andrew Lloyd Webber’s pocket!
Here the setting is “The Impossible City”: Venice in 1580 (although it was filmed in Eastern Europe, as most things set in the past seem to be these days).  There is a spot of in-jokery when The Doctor proclaims that he is keen not to run in to Casanova … although this line would have been funnier if delivered by David Tennant, of course.
Matt Smith is still all elbows, still seemingly uncomfortable in his own body.  This was the episode where I realised just how bow-legged he is … which does somewhat undermine the determined purposeful walk he is required to provide at significantly dramatic moments.
The premise of this episode is that The Doctor takes Amy and Rory to Venice as a wedding present – a thoughtful, generous, romantic gift and a great way of circumnavigating that snogging problem he had with her in the last episode.  Obviously, since he is being written and played as an eleven year old boy, his first instinct, when presented with the very real danger of being snogged by a girl, is very much what an eleven year old boy’s would be … grass her up to her boyfriend.  Ah well, no one expects profound emotional insight at 7pm on a Saturday.
The vampire plotline itself is dealt with very well, with the white ‘brides’ floating around like something from an early-70s semi-erotic Hammer horror film. 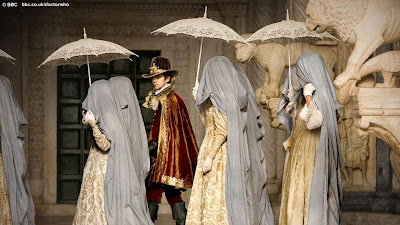 The historical setting also allows for some wonderful costumes, particularly Madam Calvieri’s awesome dress.
Of course, there are a few inconsistencies in the presentation of these vampires:  They are destroyed by daylight, yet simply shield their eyes to protect themselves from it.  Surely, if daylight can make you explosively dehydrate … touching any part of your skin would have that effect, not just the eyes?  And why does daylight bother them anyway, when it soon becomes apparent that they aren’t actually vampires at all but rather “fish from space” hiding behind the increasingly versatile (and convenient) Perception Filter technology?  But these are small issues for which the confidence and quality of the presentation earns forgiveness.
One thread that seems to be over-hanging this series from Russell T’s shift, is the criticism of The Doctor’s methods.  At one point Rory tellingly informs him that he has no idea “ … how dangerous you make people to themselves!”  This is, of course, entirely correct and a necessary side-effect of the fact that every single place the Tardis takes him is a place on the cusp of crisis.  Self-destructive adrenaline junkies are either really, really well prepared, or they are short-lived.  The Doctor is very obviously NOT short-lived.  The same cannot be said for the characters around him who are typically disposable.
After a visit from The Doctor, the head-count in his locality is often noticeably lower than before, even though he will have carefully avoided having to kill anyone himself.  The balancing argument would remind you that these casualties are often a small price to pay to secure a greater good as the planet / system / universe is no longer under threat.  But we viewers know that the high-cost peace will be short-lived as the universe will be in danger all over again in seven short days.
It is almost refreshing, therefore, that it is only Venice that is endangered here.  Venice is always in peril.  Should be used to it by now!  Calvieri’s weather machine, seemingly built-into the fabric of her building (and introduced suddenly quite late in the proceedings) offers a chance for Matt Smith to do some stunts (sorry, ‘physical acting’) as he clambers up the outside of the building in the rain in a manner not dissimilar to the denouements of both The Idiot Lantern and The Daleks in Manhattan storyline.  Once up there, however, this rather clichéd sequence is redeemed entirely by the fact the Calvieri’s despotic Doomsday Weapon has a simple off switch.  Brilliant.
But there it is again – a criticism of The Doctor – as Calvieri taunts him over his determination to spoil her plans and save just one city:  “Hard to believe it’s the same man who let an entire civilisation turn to cinders and ash”.  Later, when he has won and her race faces extinction, before sacrificing herself, the tragic villainess enquires, accusingly: “Can your conscience carry the weight of another dead race?”  Oh yes, without doubt.  Just add another one to the ever-growing list. 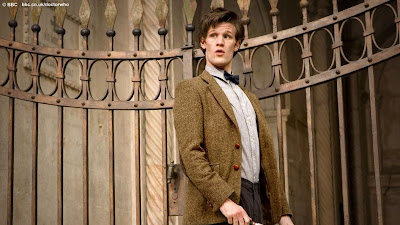 Given that the target audience of this series is avowedly children – more so than under RTD’s stewardship – all this philosophising about the morality of The Doctor seems misplaced.  Kids don’t want debates on moral philosophy, they want fish custard, apparently.  So, come on guys, make your mind up, is this a simple kids’ show or isn’t it?  The failure to establish a consistent tone within these developing episodes – and a consistent characterisation for The Doctor himself - continues to annoy me and interfere with my enjoyment of the show.
This isn’t an overly-significant episode and I doubt if it’ll be anyone’s favourite, but it certainly fills its 45 minutes with clever, creative ideas, exotic images and a well-conceived developing relationship for Rory and Amy.  Never more so than in the way that it allows Amy a chance to swap her usual role as the one in need of rescue and gives her a chance to rescue the emasculated Rory.
The problems I have are, as in previous episodes, all to do with the Steven Moffat’s overall vision for the series and his version of The Doctor.  But those are the cards script-writer Toby Whithouse was dealt.  The game he plays with them is a very skilful one, successfully turning what could have been an embarrassing filler episode into a superior entertainment and, yes, my second favourite episode in the series so far.
Posted by Cellulord No comments: