Back in March, I wrote here about how good Peter Jackson is at keeping his fans informed through excellent video blogs.  He gave us unprecedented access to King Kong - too much access, in my opinion - but he seems to have moderated that here.   He has released two videos, some ten weeks apart - one just as production was getting under way and another as the first block of shooting comes to an end.
Of course, as with any endeavour involving the vast sums of money in question, the film had a rocky development.  A few months before the deals were signed, there was a very real chance that the movie wouldn't even be shot in New Zealand ... Which was a horrible prospect because every lover of Lord of the Rings KNOWS that New Zealand is Middle Earth.  Nowhere else would do!  The Prime Minister eventually had to step in to make it happen - but here is a report when the result was still very much in the balance:
Interesting friction between New Zealand and Australia there!  Anyway, we now know it all worked out for the best... And the evidence is available in these making-of videos.
In between the two videos we have had various nuggets of information revealed - for example, there will indeed be dividing the book over two films, not one.  The first will be called: The Hobbit: An Unexpected Journey, due for release on December 14, 2012.  The second will have the original novel's subtitle: The Hobbit: There and Back Again and will be released a year later, on December 13, 2013.
We've also had our first glimpse at some of the characters.
Empire magazine has been given its traditional exclusive first look at Gandalf.  You can read the details here.
The interwebs have also been abuzz this last week with these images of the first (of many) new dwarves:
And, of course, there are THOSE all important videos.  Initially, the first video kept being taken down, but it seems fairly stable now, so you can watch it here:
Then instantly fast-forward three months to this fascinating view of the process.  I confess the imagery, the landscapes and Howard Shore's music gets me quite emotional.  I am SO excited about these films ... And, after you've seen this, you will be too:
ADDENDUM:

The drip-drip of information continues - we now have another couple of Dwarves, including the reason Mitchell the vampire won't be in series four of Being Human - Aidan Turner.  Actually ... Thinking about it ... Since The Hobbit crew are on sabbatical for a couple of months, I suppose he could shoot some scenes while he's back home.  Hmm.  Anyway, here they are - Dean O'Gorman as Fili and Aidan Turner as Kili.

Followed by Stephen Hunter as the voluminous Bombur, James Nesbitt as Bofur and William Kircher as Bifur:
FURTHER ADDENDUM:

The final couple of photos have appeared, completing the Dwarf Fellowship ...

... Including the image that Hobbit-fans have been waiting for: Thorin Oakenshield, leader of the Dwarves:

And while we're on the subject ... Here's the photo of them all gathered for the first time, before shooting began.  Not surprisingly, Aidan Turner already looks miserable.  It's not like this film is going to make him an international movie star and sex symbol, or anything ... 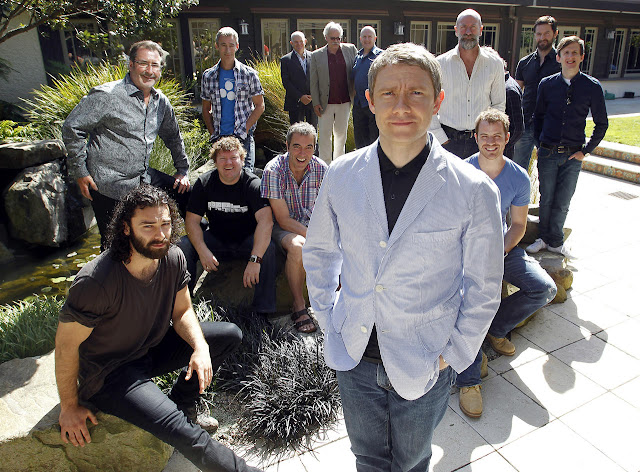