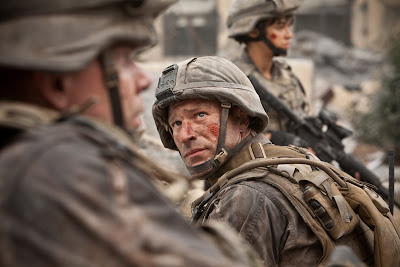 Whatever you call it - Battle: LA, Battle Los Angeles, World Invasion: Battle LA – this film delivers an over-developed sense of the importance of LA.  Practically the opening line of dialogue is “We must not lose Los Angeles!”  Why not?  What’s so special about LA that isn’t special about New York or Paris or Rome or, for that matter, Milton Keynes?

Nothing, it turns out, because this particular version of Los Angeles was shot in the other LA – Louisiana.  But, of course, its any-street-in-any-city aesthetic is really meant to put us in mind of Baghdad, of The Hurt Locker and Green Zone and the slew of other films that have established the iconography of the modern war movie.  We can now add to their number Battle Los Angeles.
Everything starts off traditionally enough, like any Irwin Allen disaster movie:  Burnt-out Staff Sergeant, who’s decided he’s too old for this shit?  Check.  The soldier who’s due to get married?  Check.  Incompetent CO who sacrifices himself?  Check!  Feisty Hispanic chic with the big gun?  Check.
Fortunately, these cookie-cutter clichés are put to one side when the aliens start crashing to Earth.  It is mentioned, in passing, that they are invading cities like Tokyo, Paris, London, Hong Kong, even San Francisco … But none of that’s really important – all that matters is that we don’t lose LA.
Once it gets going, this film never stops and it really is a totally convincing and immersive depiction of urban warfare.  The aliens are purely a maguffin to kick-off our gritty cinema verité look at how America could so quickly be reduced to a ‘Third World’ country, roads cluttered with rubble and burning cars, air thick with smoke and tracer bullets.  To reinforce that, the whole film is shot in hand-held wobblycam, so it has something of the feel of Cloverfield about it!
The running gun-battles are chaotic and claustrophobic and suitably reminiscent of the movie that every modern war film aspires to be: Black Hawk Down.
And that’s what this film has to offer that Independence Day and War of the Worlds and, more recently, Skyline didn’t – a depiction of on organised, strategic invasion by a superior force, seen from the ground level.  You rarely get a good look at the aliens and that makes them scary.
Aaron Eckhart’s Staff-Sergeant Nantz is the hero of the piece, battle-hardened and ready for anything.  He is the one who gets up close with the monsters to learn what makes them tick.
As our heroes proceed from set-piece to set-piece, you notice that the environments are changing and the aliens are getting progressively more numerous and more heavily-armed … Very much as one experiences when proceeding through the levels of a First Person Shooter.  There’s the siege level in the police station, the fire-fight level on the freeway and the stealth level down the sewers, and so on …
So, whilst video games designers are striving to create games which have the level of maturity and involvement of a good Hollywood movie (look at LA Noire, for example), Hollywood is, at the same time, producing ever-more simplistic, one-dimensional, shoot-em-ups.
As a sheer seat-of-the-pants spectacle, this film is excellent.  But its story arc and characters so familiar, it really is An Invasion Movie For Beginners.
Sound-wise, this DTS-HD 5.1 mix is intended to turn your living room into a battleground with interesting detail surrounding you both up close and in the distance.
This film looks and sounds as good as it possibly could.
EXTRAS:
Command Control:
This is one of those picture-in-picture deals, with regular pop-ups offering interviews, behind the scenes stuff and info on everything you could ever want to know about the film and its characters.  As is usually the case with these things a lot (but not all) of this is simply re-presenting the content of the accompanying documentaries.
Behind the Battle – 6.40
This is essentially a montage of sound bites and money shots giving you a behind-the-scenes glimpse of “a documentary war film … with aliens”.
Directing the Battle – 6.30
This is a profile of director Jonathan Liebesman and tells of the extraordinary lengths he went to when auditioning for this film.  He has now set a new benchmark of just how determined aspiring directors have to be to get aboard a big film like this.  And, surprise, surprise, his major influence is video-games!
Aliens in LA – 18.00
This is the most in-depth piece offered, detailing the huge amount of work which went into rationalising, designing, building and animating all the aliens and their craft, which you then see fleetingly in the distance.
Preparing for Battle – 5.15
This shows how the actors, by and large, did their own stunts – and the film certainly benefits from that!
Boot Camp – 10.18
This is perfectly self-explanatory, following the actors through a few days of intensive basic training to get them familiar with their roles, their uniforms, their weapons and, above all, each other.  Eckhart clearly loved the discipline of this and enjoyed being Staff Sergeant, openly admitting that, by the end of training, the other actors all hated him.  The highlight of this is Michelle Rodriguez complaining about having to do “girl push-ups”.
Creating LA – 5.45
This gives an indication of how easy it is to recreate downtown LA just about anywhere … And then cover it in a blanket of ash.
The Freeway Battle – 5.15
Again, does what it says on the tin: Explores the film’s biggest set-piece, for which they were allowed to close down a Louisiana main road for two straight weeks.
Posted by Cellulord