THE CELLULORD ON STAGE - ACT ONE

So, I've been away.  I've let my film reviewing responsibilities slide terribly over the last month.  I have a pile of notes that need writing up, but before I get to them, I thought I'd let you know something of where I've been.

Firstly, I was invited to give workshops at the inaugural West Dean Festival about how to be a film reviewer and how to publish a blog.  Well, I'm hardly qualified to talk knowledgably about the latter, but I have more than a few opinions about the former.  So I put together an hour-long presentation called:

'How To Have An Opinion'

Among the things I discussed were the need for a reviewer to become well-read in his subject because, after all, a reviewer is merely a person with an opinion.  Now, some people maintain that, in a free country, their opinion is theirs by right but, as the great Harlan Ellison put it so eloquently in the documentary Dreams With Sharp Teeth: 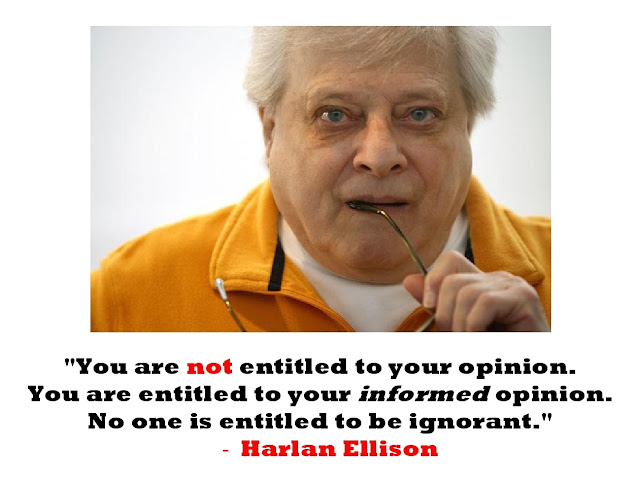 We looked at what offering your opinion as a critic can be.  It can be your soap-box, your chance to put across your dogmatic ideology.  It's your chance to be creative with words and to structure and eloquent, persuasive argument.  What it isn't ... Is something that will make a blind bit of different.  Film critics do not change the world.

For an illustration of this, I looked no further than The Critic, a show produced in 1994 and 5, which starred Jon Lovitz and concerned the peregrinations of a cynical, bald, fat, middle-aged film critic.  Can't think why I identify with the show so much ...


We also looked people's motives for becoming a critic or reviewer and found that this same episode of The Critic - episode 6, "Eyes on the Prize" - had the answer to that as well.  It shows quite clearly why Jay Sherman became a film critic ... And it's the reason so many do ... Because he couldn't cut it as a film-maker:

Sadly, this very situation makes too many critics spiteful and, seemingly, motivated by jealousy.  I know that I'd far rather be a movie script-writer than a critic, but that isn't quite how things have worked out, not yet at any rate.  Never-the-less, I try not to let my unfulfilled creative urges boil over into a cruel and bile-filled tirade against the work of those who are being creative.  At least not too often.

When I am moved to be needlessly unkind to a film, I try to remember this comment by undeniably one of the greatest film-makers who ever shouted "Action" on a soundstage:

You see, I would be mortified to think that any high-minded put-down of mine could upset a film-maker.  I genuinely love movies and have to admire the work of the people who keep putting them up there on the screen for me to enjoy.  Obviously there are exceptions, Mr. Sandler, but, as a general rule, I try not to be unnecessarily unkind.

Because, remember, all a critic is is a person with an opinion and, as Charles Durning put it so eloquently in the Jodie Foster film Home For The Holidays ...

So, that's a glimpse at my modest contribution to The West Dean Festival.  I was on stage immediately before Murray Lachlan Young, who was very gracious about my talk.  Relieved to have done my bit, I didn't return the complement by staying to watch him perform.  Regret that now!

Anyway, this was the first ever West Dean Festival - a three-day event marked with dozens of workshops in everything from knitting to enamelling and pizza throwing.  There were philosophical discussions to the accompaniment of ukulels, self-published comics, ferret racing and story-telling.  There were street performers ever though were no streets and there was live music wafting from tents in all directions.  There were gangs of exciting kids dressed as lions and tigers and bears galloping around, chasing each-other's tails in a safe, supportive, relaxed and fun atmosphere all in the gorgeous surroundings of West Dean's rolling grounds.  There was even original Salvador Dali artwork on the college walls.  The weather was welcoming, the college staff moreso and the overall atmosphere - as with any good festival - was of a timeless, other-worldliness that bitter reality could not penetrate.  It was a little bubble of perfect summer.  I'm glad I went and look forward keenly to the next one!

You get a flavour of the event from this home video:

But, for me, the find of the event was the closing night headliner: James Hunter.  I'm not a particular fan of 60s inspired Soul and Blues, but the infectious energy they had on stage and the virtuosity of their performance was just too winning!  And, furthermore, Hunter himself was just having so much fun playing the music he so obviously loves, you couldn't help loving it too!

Here you get an idea of his very English sense of humour and his very American singing voice:

And here you get him and his full band - including that smokey Hammond organ and amazing sax sounds ... On Jools Holland's Later ...

Email ThisBlogThis!Share to TwitterShare to FacebookShare to Pinterest
Labels: commentary, how to have an opinion, live appearance