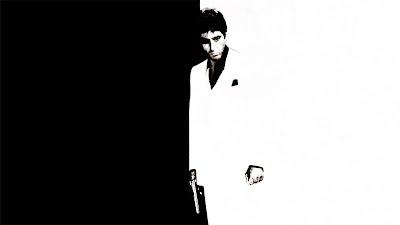 So, you'll find my report on my recent involvement with the Blu-Ray launch of Scarface here.  I was asked to volunteer my opinions on the film in general and director Brian De Palma in particular ... Because I'm apparently an expert on him.  I wrote a book about him in a previous life, you see.  In fact, here's the chapter of that book on Scarface.  Read this then you too will be a Scarface connoisseur!  Each chapter was structured so as to, essentially, list the common elements - such as De Palma's use of colour or voyeurism ... Techniques and themes which appear again and again in his work.

The Plot:  Arriving in America as part of Castro’s evacuation of Cuba’s prisons, Tony Montana is already a hardened criminal.  He sees The States as a chance for him to realise his ambition to have “what’s coming to me ... the world and everything in it”.
Soon he has negotiated his way into Frank Lopez’s drug business.  Progressively, his arrogance growing at a similar pace to his paranoia, he builds his own massive drugs empire but betrays and executes so many of the people around him that he finds there is nothing left for him to do – but defend himself.
After Blow Out, De Palma decided it was time for a change of direction again.  He had spent more than ten years honing his visual grammar skills.  It was time to put his Hitchcock phase behind him and move more in the direction of the Hollywood mainstream and the financial security that offered.
Then the explosive script for Scarface came along.  Written by Oliver Stone, the film would need a director unafraid of controversy, as it would doubtless attract criticism for its depictions of race, organised crime, drug abuse and, most of all, violence.  This wasn’t the sort of script a Hollywood mainstreamer could really do justice to.  But De Palma, who was already perceived as a Hollywood outsider – well, he had nothing to lose.
The Themes:
Violence:  One hardly need mention the violence in Scarface.  The chainsaw in the bathroom sequence was probably the one scene which haunted the censorship-debate throughout the eighties, only to be replaced after some eight years by Reservoir Dogs’ ear-cutting scene.  In common with most moments of De Palmanian violence, it involves white walls being sprayed with a substantial amount of red blood.
Voyeurism:  During Tony’s show-wedding, we get the first glimpse of his paranoia.  He has bought himself a palatial mansion, and surrounded it with surveillance cameras.
The final days of Tony’s life – his time as Nebuchadnezzar, conquering lord of all Babylon; begins with a close-up of his six security monitors, which he watches morbidly.  He admits that he spends 12% of his profits on surveillance.
Ironically, when the cameras warn him of the approach of Sosa’s vengeful army, he is too wrapped-up in his own incestuous rage and self-pity to even glance at the monitors which have cost him so much.
The Motifs:
Colours:  Colour is more conspicuously important in Scarface than in any of De Palma’s previous films – even Sisters.  The original movie poster was a striking black and white image, cut down the middle so the background was pure black on one side, pure white on the other.  De Palma hired Ferdinando Scarfiotti as ‘visual consultant’ for this film and, I suspect, orchestrating its careful, thematic use of colour, would be one of his primary responsibilities.
Rebenga, Castro’s old torturer who Tony has to kill to secure his freedom, is dressed all in white.  The white-is-evil correlation will never be more clearly defined than in this film where, of course, the Bolivian marching powder which fuels all of the chaos, is pure white.  Miami Vice, the definitive American television show of the eighties also flooded the screen with bleached and designer whites, behind which untold corruption took place.
When Tony kills Rebenga, he is wearing a red T-shirt – the colour of blood and transition.
In this film, De Palma introduces the colour orange into his regular palette, especially in connection with sunsets.  Miami is first seen as an idyllic sunset which is, in fact, painted on the side of a building.  A similar painted sunset decorates the wall of the hotel room where the drugs buy goes so disastrously wrong.  Later, when Tony makes his demand to meet Frank, and thereby force his way onto the ladder of success, he does so against the background of a real, vividly orange sunset.
Frank’s palatial home, which is both evil (it is bought with drug money) and transitional (it gives Tony his first taste of immense wealth), has stark white walls with conspicuous red details – carpets, ornaments, etc.  Frank wears a white suit.  His office, by contrast, is black with red highlights – and a painted orange sunset running all down one wall.
The first time we see Tony snort coke, which is very possibly his first time, it is given to him by Elvira, who is dressed all in white.  Fuelled by the drug, he promptly attacks her. 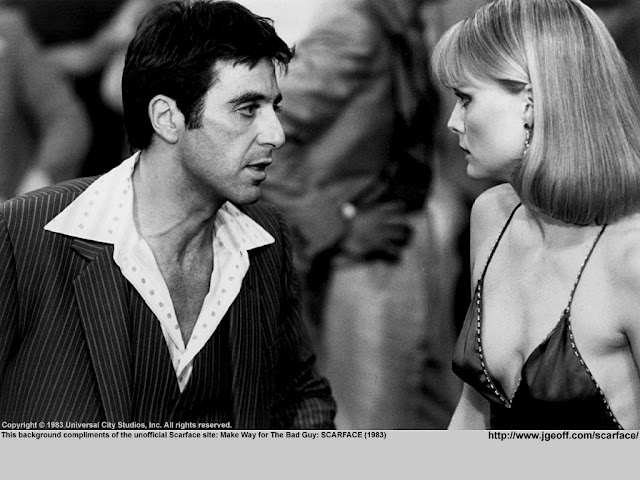 By the time Tony has become a big man in his own right, and starts throwing money at his mother – he has a white suit of his own, worn with a contrasting black shirt.  This is the colour of his power and corruption – much later, when he is powerless and the corruption has taken him over completely, his clothing will be the reverse of this – a black suit with white shirt.
When Tony goes to Columbia and makes the deal which will set him up in his own business – he wears the empowering red shirt.  The Babylon, the night-club he comes to look upon as his own, has red doors.  The bent cop – Bernstein – he meets there, wears the obligatory white suit; whilst his first show-down with his promiscuous sister, is in one of the Babylon’s toilets – all gleaming in white, with black marble fixtures.  The black and white locale is particularly ironic, since his motives for keeping Manny and Gina away from each other are never less than grey.
Once Tony has acquired his money, power and woman, the colour-scheme of his life loses the white, and runs more towards the blacks and reds.  More befitting a man-made hell!  More indicative of the fact that his ambition has about run out.  All that is left for him now – is violence.
The gallery in which he hangs the portrait of himself and his wife, has very deliberate red walls.  Implying that their marriage is all about power, not about love.  The carpets and corridors around Tony’s office are red, whilst the walls and his throne are jet black!
When Tony returns to Colombia, to Sosa’s for a council of war, they meet in a room of red walls!  So now we know from where the violence come.
As his last ragged breath leaves him, Tony falls forward and explodes into a final gush of red blood, as he falls into his own fountain.  The red aggression of his ambition brought him all the money and power he wanted, and the red of aggression finally collected the bill.
Doubles:  As Tony begins to show the first signs of breaking under the strain of his own ambition, he sits in his mirrored booth – alone – his own head reflected back at himself from several different angles, illustrating that he is beginning to live in a world which requires him to develop new skills, and new personality traits.  The fact that these heads are all turned away from him, possibly implying that he isn’t capable of this much transformation.  He will remain a barely-literate thug. 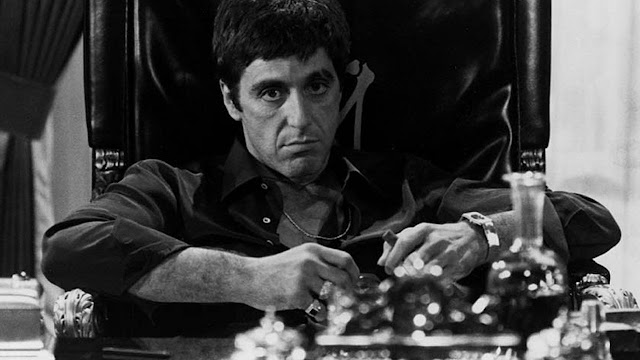 The Techniques:
Slow/Fast-Mo:  When Tony’s career takes an upswing, time flies by in the form of a montage.  We see hints of Tony’s enormous wealth, and his spectacular wedding to Elvira.  It is not without significance that we don’t actually see them happy together.
As so often happens with moments of extreme pain – De Palma extends the moment when Tony learns the truth about Manny and Gina, by reducing the sound to the bare minimum (the gun shots), and slowing the motion down.  As Gina hurls herself down stairs, he shoots Manny, point-blank.
The next slow-motion sequence also involves guns and stairs – as Tony engages in a ferocious shoot-out, with his military-style heavy-ordnance.
Split Screen:  In his office he has six security monitors, watching different sides of his house.  In his humongous bathroom, he has five television screens, offering him five simultaneous distractions from his own life.
Long Takes/Tracking Shots:  When Tony is caught in a sting operation, laundering vast quantities of money, the scene continues as a protracted take, all under the watchful eye of the camera hidden in the clock.
When his marriage is finally falling apart, along with any vestige of self-control, Tony rants at the diners in the prestigious restaurant: “You need me ... I’m the badguy ... so, say goodbye to the badguy ...”  Self pity is rarely so ugly as when practised by the successfully ambitious.
References:  Tony begins by explaining that he learned to speak English by watching gangster movies “Humphrey Bogart ... James Cagney”.  So, in the film’s opening moments, De Palma pays tribute to the 30s Hollywood genre which, ironically, was about to revitalise his career.  During this same sequence, one of the unseen cops asks Tony “Do you like to dress up like a woman?”  His denial underscores that we have moved on from Dressed To Kill into new, less psychologically complex territory.
Tony and Frank sit in a mirrored booth in The Babylon night-club.  De Palma will employ similar booths for Farrow in Bonfire Of The Vanities and for Carlito in Carlito’s Way.
Although I’m not sure if it counts as a direct reference  to Hitch – the master of suspense’s movies were known, among many other things, for their unconvincing back-projections.  Here, the driving scenes are always acted out against obvious back-projections.
One of the few specific details which this film carries over from the 1932 version – is the sign saying ‘The World is Yours’ at the foot of which, Tony will eventually die.
The car-chase, with the bomb under the lead car, and the children playing in it, combined with the dodgy back projection, puts one in mind of the child on the bus with the bomb in the birdcage in Hitch’s Sabotage (1936).