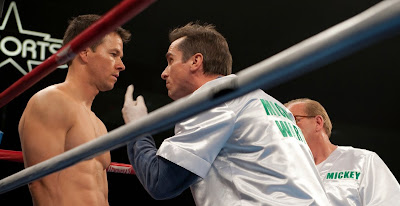 Darren Aronofsky decided to pass on directing this because it was obviously too similar to The Wrestler (2009).  Well, it is, and it isn’t.  While Hollywood is at present chock-a-block with ex-wrestlers starring in action films and comedies, The Wrestler was one of the first films to take the ‘sport’ itself seriously.  However, on the other glove, there are dozens of films about boxing:  from Cinderella Man (2005) and Million Dollar Baby (2004) by way of Ali (2001) then all the way back to Requiem for a Heavyweight (1962) and The Champion (1949).  But, for this generation, the contenders for the championship belt are Rocky (1976) and Raging Bull (1980).  You see, as Simon and Garfunkel didn’t say: Boxers are just poor boys but their stories are often told!
So, Aronofsky threw the towel in and concentrated instead on a different form of brutal physicality – ballet dancing – leaving the welterweight David O. Russell to step into the ring.
Alright, I’ll stop with the boxing metaphors now.
Russell is far from over-productive, this being only his third feature in eleven years, but he clearly knew what he was doing: he was channelling the spirits of both Scorsese and Stallone as he tells the true tale of Micky Ward, played by Mark (don’t call him Marky) Wahlberg, a two-bit fighter with a ‘coulda been’ older brother, Dickie, (played by Christian Bale) and a parasitic family of sisters, led by his conniving, exploitative mother, Alice (Melissa Leo).
To a great extent this film is not about its title character, it's more about his brother, who spends his time smoking crack to help him deal with the pain of looking back on the only worthwhile moment in his life – the day he punched Sugar Ray Leonard.  Christian Bale overwhelms the film with his ebullient, loud-mouthed and lanky performance as Dickie. 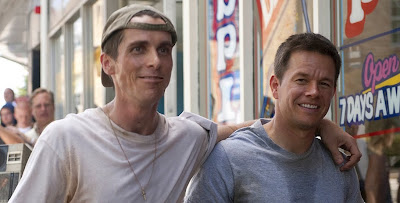 Yes, he did lose a load of weight again and yes he did have his hair shaved in patches to emulate the real Dickie’s partial baldness; but if this is what he has to do to occupy the character, so be it, it’s certainly worth the effort.   After all, he is actually three years younger than Wahlberg but, with the skin drawn tight across his bony face, he looks far, far older!  Bale is simply magnificent in this, all wounded pride and raging denial and, thanks to his energy and humour, what could have been a pathetic, one-dimensional character really comes believably to life.  They must have felt the electricity on set, seeing how Bale was, consciously or not, heading inexorably in the direction of an Oscar.  I think he’ll win it this year.  I think he deserves it.
Wahlberg, however, deserves credit too.  From the film’s opening shot, with the two brothers sitting side-by-side on a sofa, being interviewed for a documentary, Wahlberg is reserved and quiet and relaxed where Bale is energy and noise and nerves.  It makes for a great contrast throughout the film and helps build the bond of sympathy that you need to have with Micky.
Micky, you see, has a handicap: he loves his family.  His brother is a liability.  His sisters are desperate to have their own failures validated by watching him fail too and his mother babies him, while using him as a meal ticket and favouring Dickie.  They do nothing but take from him and, because he loves them without question, he just keeps giving. 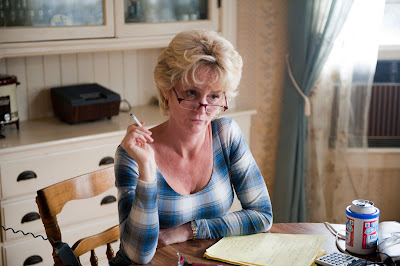 Leo gives an extraordinarily complex performance as the thoroughly loathsome mother who is as deluded as her eldest son, as jealous as her daughters, and coldly unmoved by the battering her youngest boy keeps taking for her.  She, too, richly deserves the Oscar nomination she has received!
Eventually, of course, Micky finds his back-bone, encouraged by the traditional straight-talking barmaid, Charlene (played by Amy Adams).  Her arrival seriously alters the balance of power within the family and quickly creates a spiral of misfortune.  Fortunately, even at the film’s darkest points, there is a vein of wit running through the hurt which alleviates the desperation and makes it all bearable.
Just as Micky breaks his mother’s apron strings, Dickie’s crack habit gets him into the inevitable trouble the wily viewer has been expecting, and takes him away from the family.  So, both brothers escape the pernicious influence of the mother, and both brothers get a chance to heal and grow.
At this moment, when they have both reached their very lowest points, they both rise up and – although it isn’t really there, I swore I heard Bill Conti’s music - they both throw themselves into training montages.
Ultimately, despite the excellent performances all round and the feeling of gritty cinema verité, this is essentially your standard redemptive American Dream story.  Yes, the first half, with its focus on family feuds and addiction reminded me of Raging Bull, while the second half is pure Rocky.  But, Hell, if you’re going to be evoking the memories of boxing movies, those are the ones to go for!