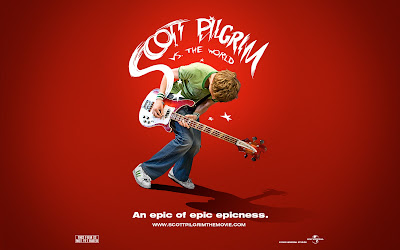 I recently showed Scott Pilgrim vs The World to Number Two Son.  Despite his monotheistic love of video games in all their manifestations, he wasn't won over by the film's aesthetic.  Possibly it simply made him feel he'd far rather be playing the games than watching film images inspired by them.  But it was worth a re-watch for me, because it reminded me how wonderful the opening credits are.

Well, the good people at Art of the Title seem to share my enthusiasm as they have created an exquisitely-detailed in-depth feature about the opening credits.  You can read it here.

The credits reference the amazing work done by Modernist animators like Len Lye and Norman McClaren whose films - hand made by applying ink and paint directly onto the film - are genuine works of art, in a very literal sense.  Also, film-makers like Lye and McClaren are, in my opinion, the only true auteurs.  You can easily claim to be the 'author' of a film if you painted the images onto the film yourself!

Here's one of Lye's pioneering pieces, from 1935.  It is, believe it or not, a cigarette commercial:

This is the film of his that I have seen the most, it has cropped up several times on TV.  Produced by the GPO Film Unit, no less!  Government sponsored art!  Makes you proud to be a tax payer.  Ahem.

But, to my mind, the man who elevated this technique to an art-form was Scottish ex-pat Norman McClaren, whose films seem somehow more coherent than Lye's.  McClaren's dots and squiggles have personality and a narrative.  It's difficult to explain how you can identify with a dot of ink, but McClaren made this possible.  His films are beautiful and dreamy but also have a delicious sense of humour which stops them being austere and intellectual like Lye's films feel to me, and make them a delightful visual treat.  They are in essence, the first pop videos:

One of his most whimsical and playful of his films is Boogie Doodle (1941), with its syncopated jazz piano score:

While another of my favourites is Hen Hop (1942), with its cheery, folky score and one of McClaren's favourite images (for some reason) chicken footprints.

Finally, have a look at Synchromy (1971) from much later in his career when he was experimenting with brand new electronic technology.  The audio was created electronically from the images.  This is one of the earliest pieces of electronic music as we now understand it and a direct predecessor of the work Wendy Carlos and Daft Punk did on the two Tron movies, as well as those eight-bit soundtracks from early video-games, which brings us right back to our point of departure with Scott Pilgrim.

So, there's plenty more McClaren out there, have a look at them on YouTube, it's lovely to have access to them at the click of button, but bear in mind that, as I discovered when introducing my Film Studies class to them, these films, whilst entertaining and intellectually fascinating, are nothing if you don't project them onto the big screen.

Those swooshes of colour and shape and movement take on a life of their own when seen playing across a big screen.  Something that is but a few millimetres in size, created by hand and naked eye, takes on a beauty unguessed-of when you see them on a laptop or TV screen.

McClaren knew how magnificent his work was, it's nice to see that Edgar Wright, seventy years later, agrees.