If you read a paper or saw the TV news in 2003, you already know this story and you probably know how it ends.  If not, you’d best not read on, because I have to discuss the story’s resolution. 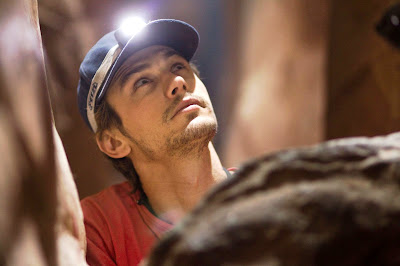 This film, based on Aron Ralston’s autobiography, Between a Rock and a Hard Place, begins with a montage of hectic city life, of crowds buzzing around neon-lit city streets and of Ralston, looking haunted and pale, escaping from it all into wilderness where he can come back to life and ride his mountain bike across … mountains.  He is the kind of guy who likes living on the edge and prefers his own company and the wilderness.  The wilderness du jour is Blue John Canyon in Utah which is, frankly, exquisite enough that no one could blame him for wanting to be there.  However, Ralston is also the kind of guy who likes to ignore the beaten path and clamber around parts of the canyon that no one else visits which is, of course, how he gets himself into trouble.
To be fair, he comes across as something of a self-important, arrogant prick.  But, maybe this confidence, this self-belief, is what carries him through the ordeal he is about to experience.  He accidentally slips into a narrow crevasse, pulls a rock down on himself and ends up wedged, with his arm crushed.  Showing remarkable presence of mind, the cool, logical engineer in him very quickly comes to the fore and he applies himself dispassionately to the matter at hand (sorry).  He is disciplined with his water and imaginative with his problem-solving, as he, initially, sets about patiently chipping away at the rock to free his arm.
To spend so much time alone on camera, running through such a spectrum of emotions is a dream role for James Franco, it’s the sort of role for which any leading man would give his right arm (sorry, sorry).  There is the better part of an hour at the heart of the film when it is just him, his motivation and his internal monologue. Coming off the back of Milk (2009), where he played Harvey Milk's partner, Scott, and the as-yet-unreleased-in-the-UK Howl (2010), where he played Allen Ginsberg, Franco has quickly built himself a reputation as a serious actor and an expert at playing real people.
Like last year’s similarly-themed Buried, this film is shot in unflattering, penetrating, distorting close-up.  We get so close to Ralston we can actually see inside his head, to him remembering tender moments with his dad and regretting not answering the phone to his mum and fantasising about student parties with that certain girl.  Gradually he realises that people actually are important to him!
Director Danny Boyle’s usual DP, Anthony Dod Mantle is present and correct, ably abetted by a newcomer to the Boyle posse - Enrique Chediak.   There is, as yet, no explanation of how the two cinematographers broke down the workload, but I imagine one of them may have worked on the hallucinations, leaving the other to do the real-world stuff.
Boyle proved himself a master of the cinematic hallucination with Trainspotting (1996) and he employs these skills repeatedly throughout 127 Hours as Ralston’s starvation and dehydration send his mind wandering into juxtaposed split-screen montages.
The film is certainly as visually audacious and energetic as we have come to expect from Boyle.  Ralston has a video camera with him, which he uses to make video diaries and, ultimately, record what he believes will be his last will and testament.  Boyle’s DP’s invest the film with the crude intimacy of held-held, home-made videos, to emphasise the verisimilitude of this true story.
What could be a remorselessly grim film is enlivened by a very welcome vein of humour, especially when he is talking directly to his camera and imagines himself appearing on a chat-show which, let’s be honest, we’ve all done on occasion, even when not pinned under a boulder and facing almost certain death. 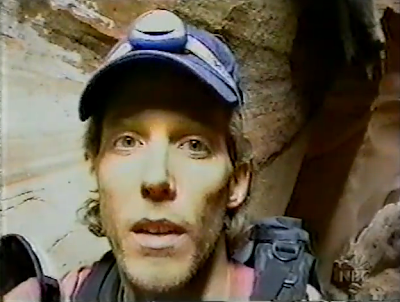 Much of this material is taken from the videos the real Ralston recorded, extracts from which can be viewed as part of this documentary.  Looking at them, you appreciate just how accurate the movie adaptation of the real event is!
If I have any criticism of the film, it is that the hallucinations make their point, then re-make it, then re-remake it.  Yes, we know he has regrets.  Yes, we know he wants to see his family and that girl again.  We also know how this story ends and, after the one hour of screen-time that stands for the 127 hours he endured, we really are ready for the moment we have been awaiting anxiously.
Ralston’s will to survive is extraordinary (even if it does fall short of Bear Gryll’s obsession with eating live insects) as is his presence of mind throughout the ordeal.  He even finds the poetry in his surroundings and finds time to enjoy watching the sun-rise!
Finally, having reached the point where he has nothing to lose, Ralston makes the decision which saves his life, a decision which, frankly, I feel few of us would make in his stead.  And, even if we did, would we have the strength to go through with the horror and the unimaginable pain of it?  He decides that, yes, finally, he must use the cheap, all-but-blunt multi-tool that has been taunting him for five long days and cut off his own arm.
Then, without warning, he deliberately breaks both bones in his arm.  This is a shocking moment for which I was not prepared.  But this sickening start to the proceedings, which you know is inevitable, is not the worst of it.  There is one literally nerve-wracking moment which uses sound brilliantly and which will live with you long after you’ve left the cinema.
The camera doesn’t dwell, doesn’t relish, but neither does it shy away from Franco’s incredibly convincing performance.  Handled differently this could have become parody but, as it is, you believe it completely, you are caught up completely in super-human endurance and imperviousness to pain and, only afterward, do you remember that it felt true because it is true! 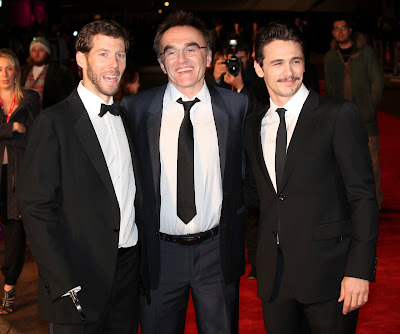 Having read up on the real Ralston since seeing the film, I can admire the way he has lived his life since (even if the damn fool does still go climbing mountains) and this has increased my regard for the film but, as a standalone viewing experience, I found it to be a minor addition to Boyle’s CV.  I don’t know if this is because I am comparing it to Buried which surprised and delighted me in roughly equal measure.  127 Hours certainly has its moments and a stunning central performance but, ultimately, the fireworks of Boyle’s hectic and eclectic visual style try too hard to compensate for the perforce stationary nature of the story.
Maybe he should have gone the route Kevin (brother to Boyle’s ex-producer, Andrew) MacDonald chose for Touching The Void (2003), which tells a similar tale of unfathomable human endurance, but intercuts it with interview footage from the real people, helping you to get into their mindset without the need for a palette of visual tricks.
Maybe you should watch the two films as a double-bill and make up your own mind!
Dir: Danny Boyle
Star: James Franco, Kate Mara, Treat Williams, Kate Burton
Dur: 94 mins
Cert: 15