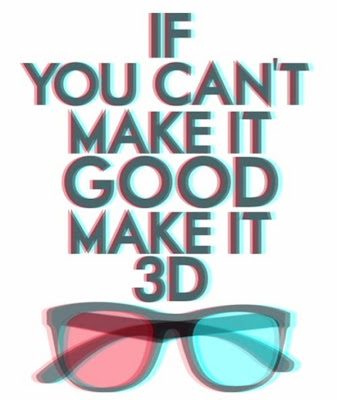 So, I have been fairly unambiguous with my opinion of 3D.  I consider it to be a gimmick, a smoke-and-mirrors trick that merely allows Hollywood to continue foisting sub-standard work on the world by disguising it with cosmetic glamour.

My reasons for this are based on a cold assessment of the films burdened with the 3D logo.  I watch them in 2D and, therefore, am not distracted by the jazz-hands of 3D effects, so I can follow the story, assess its structure, evaluate the quality of the writing and acting and, ultimately, decide if it is any good.  None of that is quite so easy when one is having sharp pointy-things constantly thrust at one.

I have discussed the costs/benefits of 3D with professional cinema projectionists and they share my reservations.  3D keeps reminding you you are watching a film.  Far from creating the suspension of disbelief and total immersion for which most film-makers strive, 3D keeps thrusting things out of the screen at you and thus reminds you you are looking at a screen.

You may argue that bad 3D does this and, to be fair, I couldn't argue with that, because I can't say whether the 3D is good, bad or indifferent.  But the evidence would suggest that most 3D is bad 3D.  Come on, was anybody impressed by Green Hornet?

Now, in the interests of total disclosure, I don't watch films in 2D just to be awkward or to make a point, I do so because I don't have a choice.  I have a condition which my optician refers to as 'a squint'.  This doesn't mean my face is screwed up all the time (unless I'm watching an Adam Sandler film, obviously), it means that my eyes don't converge like yours (most probably) do.

Here's the science bit: Because your eyes are on the front of your head (not the side like, for example, most birds) and are separated by your nose, they each see the same things from a slightly different perspective.

These two images are then projected over the top of each other in your brain and that creates the illusion of 3D.  This is called 'stereopsis' and is a natural evolutionary development of having two eyes on the front of your head.  When the object you are looking at moves closer, your eyes converge - tilt inwards to move your pupils fractionally closer together.  Well, my eyes don't do this very well, consequently I have no stereo vision.  Evolutionarily, I'm a huge leap backwards.

I get around, I can't play tennis or football because I have rubbish depth perception and constantly miss the ball, but I don't walk into things very often and, y'know, I can hit my mouth with my fork (probably more than I should).  It's okay.  Don't be setting off and running any marathons for me.

The point is, I can't see 3D.  Back in the bad old days of red and blue Anaglyph glasses I ended up watching the film with one eye - either in red or in blue - because, otherwise, it was blurred.   Nowadays, thankfully, with grey Polarised lenses, I can at least see the film in focus.  But it's still 2D.

But, here's a thing - It seems that I am far from alone in having biological problems with 3D.  I was looking, last night, at a very fine filmy website called Obsessed With Film (go and have a wander around here but be careful, you might become obsessed) and they published an article based on an open letter from Film Editor and Sound Designer, Walter Murch, about why 3D doesn't now and never will work.

This letter was originally published by the inestimable Roger Ebert and makes fascinating reading.  Why?  Because Murch is very well informed about the technology of film production and exhibition.  He has a shelf full of shiny gold awards reflecting his technical abilities and know-how.  He has also worked in 3D, so he knows what he's talking about!

It makes fascinating reading, I think, and there is, inevitably, a very heated comment exchange afterwards.  Have a look at Murch's letter here ... Then lemme know what you think.
.
Posted by Cellulord