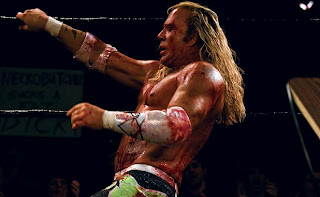 Darren Aronofsky is a director who isn’t scared to take risks. Hiring Mickey Rourke, when no one else would take his calls, that was a risk. It resulted in his promised budget evaporating to just $6 million.

Consequently, the aesthetic of The Wrestler is that of the cinema verité documentary, all hand-held-cameras and available-light in existing locations rather than beautifully-lit custom-built sets. Mixing real people in with the actors, that’s always a risk, because that can go either way. The set-piece scenes seem thrown hap-hazardly together as though the film were being assembled on the fly. Turns out a lot of it was. Now that’s very risky!

We spend an inordinate amount of time behind Randy ‘The Ram’ Robinson (Mickey Rourke, on career-best form) as he stomps, huffing and puffing down poorly lit corridors. When he talks, his expressions range from pained to confused to just plain depressed and he genuinely seems to have no idea what he’s going to say next, which is, let’s face it, the defining characteristic of anyone not reading from a script. In fact, the only thing that this film lacks to make it a real documentary bio-pic is Nick Bloomfield deliberately getting himself in shot as much as possible.

No, unlike Mr Bloomfield, both Aronofsky and Rourke demonstrate an almost painful lack of vanity in this project. When Ram tells his daughter “I'm an old broken down piece of meat and I deserve to be all alone. I just don’t want you to hate me”, tears roll down his rough red-raw cheeks and you feel as though it is Rourke himself speaking to us, the viewers, from the heart.

Then we come to the careworn flower of Cassidy, as played by Marisa Tomei. Like Randy, she takes her clothes off to entertain others. She, like him, performs under a pseudonym. Their key connection is that they have both seen better days. Tomei, like Rourke, is perfectly cast. These are roles which have been waiting for these performers to be ready for them, which helps you see through the clichéd nature of the story because, after all, clichés are clichés for a reason … mostly because they are recognisable as truth!
I wonder, when he signed on the line, if Mickey Rourke knew quite what he was letting himself in for. Did he, in his heart, think this was his big shot at an Oscar? If nothing else, The Wrestler has offered Mickey Rourke the chance to successfully demonstrate to a cynical world that he really is the fighter he has always believed himself to be.
All of which brings us to the fight scenes themselves. These are clearly hard work for Rourke (who is now well into his fifties, let us not forget) but then that just adds to our empathy with the suffering of Ram.
But the film isn’t about the fighting, it’s about the fighters and we particularly feel for them during the rightly notorious ‘Hardcore Deathmatch’, where the combatants hit each-other with furniture and various house-hold implements, most of which are wrapped in barbed–wire.
This sequence is quite shockingly brutal. There is considerable bloodletting, reminding us of the visual and metaphorical similarity between fighters and raw-meat. What we have is the reality of the WWE-type pantomime we happily let our kids watch on TV. This is the brutality that exists one-step away from the TV cameras. These are the gladiators who are, quite literally, being sacrificed for our entertainment.
The Disc:
You get the film in dizzying 2.35 wide screen but I must mention that, being as it was shot under documentary conditions, it doesn’t really benefit all that much from the hi-def of Blu-Ray. The extras included aren’t numerous, but they are telling …
Within The Ring – 43 mins. A no-nonsense ‘making of’ made by Niko Tavernise, the stills photographer on the main film. It’s a genuine, honest behind-the-scenes document similar, in some ways, to Vivian Kubrick’s Making The Shining.
It features talking-head interviews with film-makers for whom the gloss of show-biz has worn off. They don’t want to maintain the pretence of glamour. They want to talk about shooting a film with no money in the depths of winter on New Jersey.
The real-life wrestlers who feature in the film are all erudite and softly spoken, in their tights and tattoos. “Necro Butcher” (sic) comes across as an affable sort of chap who will likely have a career in after-dinner speaking when he’s too rickety to be jumping off ladders onto people’s heads.
The main impression you get from watching this documentary is how important the subject of wrestling is to Aronofsky who, as a child, went to many matches with his dad. Film-making at this level should be personal and it should be passionate.
And speaking of passionate:
Mickey Rourke Interview – 15 mins. Rourke gave so many painfully honest interviews during The Wrestler’s extraordinary awards season that there’s very little in this one that’ll come as news but, as with all those interviews, he is shamelessly honest.
He talks about rewriting some of the key dialogue to make it more personal and then ruminates, quite movingly, on the lives of real sports people who, once their routine and career is over, are lost souls. Well, every moment of this disc tells you that Mickey Rourke’s soul is found.
And for those with attention-spans so short they can’t even be arsed to read the review – I give this a Cellulord Rating of: CCCCC
Directed by: Darren Aronofsky.
Written by: Robert Siegel.
Starring: Mickey Rourke, Marisa Tomei, Evan Rachel Wood and John D’Leo.
Cert: 15
Dur: 109 mins
Images © Optimum Releasing in the UK.
Posted by Cellulord