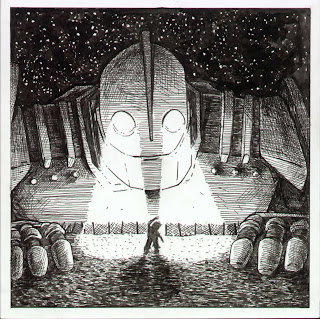 So, as we are approaching its tenth anniversary ... I thought I'd point you to this wonderful collection of sketches, design-sheets and original art for The Iron Giant.

It was, arguably, the last great (American) 2D animated feature.  It had a heart and a beauty that Disney lost and Dreamworks never really had.  It deftly interwove historical references, science fiction motifs and, of course, Ted Hughes' allegorical 1968 novella The Iron Man into a film which remains a delight to behold.

It would be lovely to see it on the big screen again ... let's hope the tenth anniversary gives Warners the excuse it needs to milk some more big-screen coin out of the movie.

Anyway, the website has been put together by David Zart, based in Ohio, who is basically just an Iron Giant nut (and I mean that in a good way).  He has spent the last ten years collecting a vast library of art-work associated with the film, which he has generously gathered together in his website.

There are hundreds of images to drool over, from rough sketches to finished paintings to character sheets ... if you love peeking behind The Curtain, if you love The Iron Giant, if you love great film art ... you'll love what Mr Zart has to show you.

Pay a visit to:

the ultimate iron giant
... but don't forget to come back here after : )
.
Posted by Cellulord