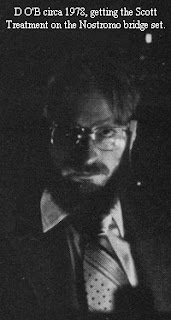 Welcome to part two of my shameless re-hash of articles wot I wrote ten years ago. They’re here to celebrate the 30th anniversary of the film’s release for Halloween 1979.

Dan O’Bannon began his part-time endeavour of writing the script which would become Alien in 1972. It was during the particularly creative period of his life which saw Dark Star (1974) hammered into shape (a film he not only wrote, but also starred in - as the hapless ‘Pinback’ - under the direction of his then-college-colleague John Carpenter).

The Alien idea bore certain resemblances to Dark Star in that it featured a claustrophobic environment and various feckless characters grumbling about their little in life. All very seventies.

By 1976, O’Bannon was homeless, sleeping on the couch of his writing partner Ron Shussett, and together they were working on a soon-to-be-scuppered version of Frank Herbert’s Dune (This went through several more hands – including Ridley Scott’s - before eventually making its way down the rocky road to our cinema screens with David Lynch writing and directing).

It was Shussett who suggested combining the old half-finished script about a battered industrial space-ship, with a story O’Bannon had written called ‘Gremlins’. This had nothing to do with the Joe Dante film of the same name - it was about a world war two B-17 bomber infested by mysterious midget mischief-makers. Put the two ideas together and you have an industrial space-ship infested by aliens.

“My belongings were in storage,” D’OB told ‘Fantastic Films’ magazine, “But I carted out of storage that desk and that filing cabinet and that chair, and stuck it all in Ron’s front room so I could work.” In such inauspicious surroundings, he set about writing a script which he intended to direct as a low-budget companion-piece to Dark Star.

Shussett insisted on trying out the big studios first. To their mutual amazement Walter Hill’s company ‘Brandywine’ snapped the script up and sold it to Fox, on condition that Hill direct. Within months, O’Bannon had money to burn, but his aspirations to direct had gone up in smoke. “It was interesting because [the money] came just in time to pay my medical expenses ... I came down with a very bad stomach ailment in 1977. I was sick a great deal of that year.” It has been suggested that this complaint provided the inspiration for the chest-burster scene in the film.

Salve to his wounded ego over not directing, was being hired to oversee the design of the film. DO’B brought his long-time friend Ron Cobb on board. Primarily a fine artist who paid the bills by publishing cartoons in magazines, Ron Cobb’s only significant film credits up to Alien, were designing the titular craft in Dark Star, and providing a few last-minute additions to the fauna of Mos Eisley’s Cantina in Star Wars (1977).

Both of these jobs had come from his friendship with DO’B, so it was only natural that he should come aboard to help design Alien. He found himself working, all-but solo, on the Nostromo - then still known as ‘The Snark’, but about to be given its first re-dub to ‘Leviathan’. Cobb asked for his friend Chris Foss to be included - whose outlandishly coloured, abstract space-ship designs had been gracing sf book covers throughout the seventies. They worked together, bouncing ideas off each other. However, it was the functional, industrial look of Cobb’s designs which , eventually, survived into the finished film.

When Walter Hill decided not to take up the directorial reins, preferring to go with the urban western The Driver (1978), the good ship Nostromo was left without a captain. One Director’s Guild strike and several months later, the script having been waved in front of all the usual suspects (including a young up-and-comer called Spielberg, who was just finishing off a very different alien film of his own - Close Encounters of the Third Kind, 1977) a list of available directors was presented to the desperate producers. Showing laudable discrimination, they pick the first name on the list, and so it was that Brit Ridley Scott came aboard, bringing with him a very particular vision.

Under his guidance, the Nostromo became a 800-foot-long tug pulling a two-mile long refinery. Cobb, Foss and a team of other designers were competing with each other for months, trying to come up with something that they were happy with. Finally, principal photography with the actors was over, post-production was in full swing, and they still had nothing for the exteriors of the ship.

Cobb confessed to ‘Fantastic Films’ magazine that his team could have gone on designing and redesigning forever: “ ... then Brian Johnson came in, and he was going to build a model. He made up their minds for them. He just took my drawings and went right out to Bray Studios and built it.”

In ‘The Book of Alien’, Cobb explains his way of working: “I’m sort of a frustrated engineer ... So, in working on a film, I like to take this challenge and design a spaceship as though it were absolutely real, right down to the fuel tolerances, the centres of gravity, the way the engines function, radiation shielding, whatever.”

So intensive is his attention to detail, one of his (unused) blue-print designs for the Nostromo refers to its ‘Yutani T7A NLS stellar drive’ engines. Utter gibberish, of course, being named after Cobb’s oriental neighbour, but it does provide one of the rare hints to the identity of the mysterious ‘Company’ which operated the Nostromo. Only in Cameron’s sequel, Aliens (1986), would they be identified on screen as the fiendish ‘Wayland-Yutani’!

As to the interiors, Cobb had his finger-prints on every room and foot of corridor. The octagonal doorways were his, the wall decorations, even the light fittings. His designs, honed in consultation with Scott, were brought to full-size life by Production Designer Michael Seymour and Art Directors Roger Christian and Les Dilley.
As for the Nostromo’s bridge, when Scott asked for ‘the military look’, without being too specific, Christian simply set to work with a team of set-dressers and mountains of scrap piping, tubes and switches ... hundreds and hundreds of switches, all with little lights behind them. Then Brian Johnson came along, worked out where all the crew were going to sit, and set about making the dials and switches on their bits of the bridge actually work.

Celebrated French comic-book artist, Jean Giraud (aka ‘Moebius’) worked on the film for hardly more than a long weekend, yet one of the few designs he contributed - for the surface suit - survived virtually intact into production - fish-bowl helmet, cricket-pad leggings, head-mounted search-light and all!

As Michael Seymour put it in ‘The Book of Alien’: “I responded to Moebius’ drawings with the thought that they looked like medieval Japanese armour, John Mollo took that idea and developed it in an incredible way. I mean, they’re space suits, but they’re also very Gothic, with very rich surface texture.”

Much, it must be noted, like the film itself!

‘The Very Best of Fantastic Films’, published in the U.S. in February 1981 by ‘Blake Publishing’. From the articles: ‘Alien Screenwriter Dan O’Bannon’ by Ed Sunden II; and ‘Ron Cobb’ by E.G. Sunden II.

Whilst others originate in:

‘The Book of Alien’ by Paul Scanlon and Michael Gross. Published in the U.K. by ‘Star Books’ in 1979.
.
Posted by Cellulord