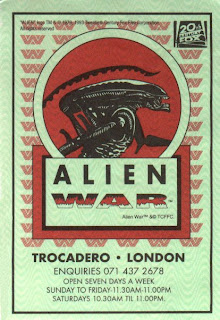 Back in the summer of 1994, I found myself standing on a litter-strewn pavement, KFC and Burger King wrappers swirling around my ankles as I stared at an unimposing doorway just off Piccadilly Circus. Beyond the doorway I could see a long narrow flight of stairs and, as I stood there, in the way and being constantly jostled by the shoulders of passing Londoners, I was undecided about descending those stairs to sample the pleasures which awaited at the bottom.

I was, of course, standing outside central London’s largest amusement complex The Trocadero, gazing at the entrance of ‘Alien War’, which had taken over its basement. ‘Alien War’ was the live role-playing ‘experience’ which tailored the briefly fashionable ‘Laser Quest’ games of the mid-nineties into an authorised ‘Alien’-themed ride. Well, as I was to learn, it was more of a run than a ride!

The brainchild of ‘Alien’ movie-memorabilia collector John Gorman, and Gary Gillies, ‘Alien War’ began as an elaborate way for them to show off Gorman’s collection of original props in their home town of Glasgow. Essentially, the idea was to get away from the traditional way of presenting such treasures – on stands or in glass cases, by allowing the viewer to see the props in use as Marines fought off Aliens whilst running through gloomy, smoke-filled corridors.

During 1992, ‘Alien War Glasgow’ scared the kilts off more than 100,000 Scots in just six months, and attracted the attention of broadcasters and print journalists from all around the world. It also caught the eye of American venture capitalists who brought with them the possibility of opening a more elaborate, more expensive ‘Alien War’ in the heart of London.

So, there I was. Gazing at the stairs. What the hell.

At the bottom of the stairs, a sign welcomed me to Weyland Yutani Base 166 and a left turn took me into the arrival/departure lounge. Appropriately, off duty marines lounged about, cradling their rifles and sharing a smoke (yes, I know they were actors earning a living whilst waiting for their first big West-End break, but suspension of disbelief is half the battle with these things, so bear with me) whilst a small group of punters (whose multi-coloured clothes and shopping-bags didn’t really fit-in with the drab distempered walls and standard-issue fatigues of the players) gathered in front of the memorabilia stall, debating whether to buy this t-shirt or that base-ball cap.

At the ticket-office, I shelled out my £8.00, which I felt was steep, even by London standards, and joined the group by the stall.

Obviously deciding that we now had a quorum, the Marines split up, some went through a door marked ‘Base 166’, one came over to us, introduced himself and asked us to follow him on a guided tour of the scientific facilities of the Base.

Inside, we gathered in an ante-chamber, in almost pitch-dark, and our guide explained that live Aliens were being held captive inside, and we would have to be aware not to touch anything as we were escorted through to see them. He then excused himself and went back the way we had come.

So, there we stood, eight of us, in the dark, waiting. The girls giggled, the lads began to mutter about being bored. Then alarms started to go off – was it a real fire-alarm, or part of the game? A garbled tannoy message told us that the Aliens had escaped; ahh, part of the game then.

We heard more sirens, more messages, even the occasional burst of gunfire. And there we stood, wondering if this was it, just standing in the dark and listening while the fun was going on around us. Had they forgotten us?

We had all, quite naturally, been watching the door our guide had gone out, waiting for him to come back. Everyone jumped about a foot into the air when a hidden door behind us burst open and a Marine hurled himself through it, turning his pulse rifle to blast the darkness behind him. He yelled at us to follow him, and we were off, haring down low, dark corridors, dimly lit from behind metal grilles.

We had to hide behind corners, run across exposed areas in groups of two, or wait at the back whilst our Marine went into the next room first. Once, just as he told us it was safe to proceed, the lights blinked out and he was lost amid screams and sporadic flashes of gunfire. At that point we were on our own again – in the dark, coughing on the dry ice and being deafened by the howls of the Aliens and the screams of their victims.

Another Marine, this one a Vasquez-alike, appeared out of a side corridor and took charge of us. She led all nine of us into a tight elevator, which, of course, fused and plunged us into darkness once more. The hammering on the walls told us that the Aliens were close, then a panel was torn away and one of our number was grabbed and dragged screaming away.

Lots more corridors and flights of stairs later, we burst out en masse into the departure lounge, to the surprise and amusement of the next group gathered before the t-shirts and brochures. Looking back, the door was closed and Vasquez had disappeared.

A certain amount of embarrassed coughing and demeanour-adjusting took place, and then off we wandered, back into the world dull, dreary, wind-swept world. As I emerged back into the throng on the streets, all urgently going nowhere fast, I checked my watch. I’d been in there all of ten minutes, including the waiting around in the initial ante-chamber. Eight quid for ten minutes. Hmm.

Upon reflection, I decided that the sets and props had been so convincing, the effects so impressive, and the performances of the Marines so emphatic, that I had enjoyed myself immensely, and that the money had been well spent. But, unlike many people I have spoken to about it, I also decided that it wasn’t the greatest value for money I’d ever encountered and, as such, once was enough. The Trocadero ‘ride’ closed in 1996 after flood damage and never re-opened.
An altered version of ‘Alien War’, cunningly re-dubbed ‘Alien Wars’, with all of the Fox-copyright material carefully reworked or removed, has been running this year at Liverpool’s Spaceport centre. I don’t know how it compares to the original but I know it costs £9.50 a head for adults which, oddly, seems quite reasonable now. What a difference fifteen years makes.
.
Posted by Cellulord