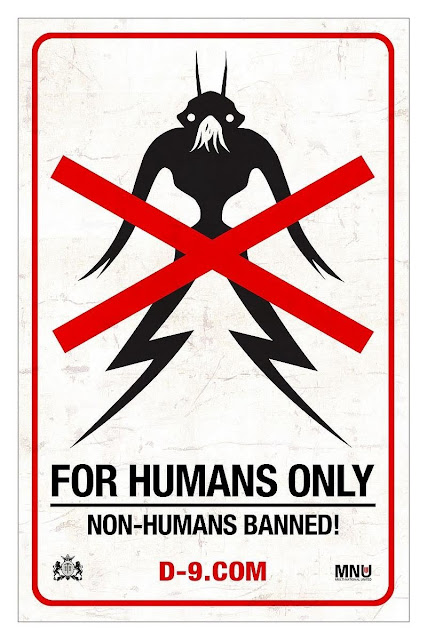 One of a slack handful of films being released this year which play with the number nine, District 9 is a nice piece of post-modern pastiche which hails, surprisingly, from the Southern Hemisphere.  Indeed, as its opening monologue wryly comments: “To everyone’s surprise, the alien spaceship didn’t come to a halt over Manhattan”.  In fact, it picked Johannesburg.

This film marks the first completed project from ex 3D animator, Neill Blomkamp, originally from South Africa, and Peter Jackson from across the water in New Zealand.  As lurkers in the internet rumour mills will know, they worked together, for a while, on a film version of the video-game Halo, which ultimately didn’t happen.  So they seem to have gathered up their toys, their bug-eyed aliens, their advanced weapons and their mobile armour and taken it all away with them, to re-work it into District 9.

The significance of the subject matter of this, the first breakout South African film since … well, since ever … is not lost on those of us who have memories long enough to recall the horrors of apartheid.  Even if only glimpsed briefly and from a distance courtesy of the television news, we know that South Africa does not exactly have an exemplary record when it comes to race relations.

Therefore, at a time when economic migrants from the Southern Hemisphere are heading north, when words like “Asylum-Seeker” and “Scrounger” are synonymous, at least in the pages of certain loathsome newspapers, Blomquist et al are to be congratulated in taking on this complex question at this precipitous time.

Whether or not a science-fiction fable can say anything significant and constructive about race relations in the real world is, of course, another question, but it certainly doesn’t miss any opportunity to have a go.  During the film’s opening news report, a vox pop of locals demanding the aliens ‘go home’ is mostly made up of black faces.  When we are introduced to our hapless protagonist, minor government official Wikus Van De Merwe he defiantly attests “This is our land!”  Of course, being a white Afrikaner and therefore a colonist of the Zulu kingdom, that’s not entirely true, is it!

As MNU (Multi-National United) move in to the slums where the ‘prawns’ are caged and forced to scratch an existence, it gradually becomes clear that they have two agenda, one: control the prawns, two: relieve them of any futuristic alien weapons.  (For MNU, then, read OCP – the ominous, omniscient, omnipotent corporation from 1987’s Robocop).

It is during these scenes of slum clearance that the TV coverage of the movie’s early moments evolve into a hand-held, fly-on-the-wall documentary style, but this technique doesn’t become a rod for the film-maker’s back as they simply abandon it when it suits them.  Where Wikus begins by talking directly to the camera, acknowledging its presence, he soon goes off on his own into situations where no camera crew could possibly follow.

To help avoid the race issue appearing too – ahem – black and white, we have the Nigerian gangs, also living among the ‘prawns’ in their slum, feeding them and exploiting them mercilessly.  Indeed, we have all human life here in this quagmire of mixed metaphors.  Every inhumanity you can imagine us visiting upon each other, we can now visit upon the newcomers.  The race issue becomes especially grey when the bullying, petty-bureaucrat, Wicket becomes infected by the aliens, changing his DNA and slowly transforming him.  He becomes an outcast of both societies, not enough Us to stay here, not enough Them to go there.

The ‘prawns’ are given human eyes, so we will identify with them, empathise with them, fear for them.  But the humans themselves have no such redemptive qualities.  This film betrays an unrelentingly bleak vision of humanity, weaving together corporate corruption, slavery, vivisection, ethnic cleansing, racial stereotypes and a bottomless pit of human greed.

There is a puerile and rather obvious conspiracy that develops around Wicked, who, in his altered state, is increasingly perceived as an asset to be exploited rather than a person.  As he is abused, humiliated and rejected by everyone he wrongly thought loved him, our sympathy slowly, oh so slowly, turns in his direction.

It was at this point that something which had been niggling at the back of my mind suddenly clicked.  The ‘prawns’ reminded me of something, but I couldn’t quite think what then, as Wiki looked down in horror at his own transformed arm, glistening, twitching and insectoid I realised where I’d seen this before: Chris Walas’ final Fly design for Cronenberg’s film The Fly (1986).  Mixed with a bit of Doctor Who’s Ood.

Under Peter Jackson’s skilled stewardship, the marketing for this film was masterful, conveying the basic premise in a beautifully appetite-whetting way.  Alien Nation (1988) but shot like Cloverfield (2008) was, I imagine, the pitch.  Unfortunately, the script of the finished film isn’t up to the standard of this high concept.  Many sequences are, in themselves, very skilfully put together, and there’s no denying that the CGI ‘prawns’ have been seamlessly woven into the fabric of the film so you completely believe in them, but the plot simply doesn’t hold together.

I’m not one to insist that the Aristotelian Unities be slavishly adhered to, but this film is social commentary, black comedy, body horror pastiche, sci-fi actioner and, ultimately, war film.  That’s too much.  But, in accordance with all of the Hollywood script-writing classes, the film’s closing act barrels towards a chaotic, nose-bleedingly fast-paced, explosive and, of course, redemptive finale that they obviously hoped would cover-up for the inadequacies and inconsistencies of the script’s earlier acts.

The uncomfortable verite of the early scenes progressively falls away until, by the end, we have something that would not have looked out of place in Michael Bay’s tub-thumping, flag-waving Transformers behemoth.  That’s about as far from documentary and social commentary as you can get in a single medium, let alone a single film.

Oh, and can someone explain to me quite why a very large dead spaceship would continue to hover in the air, a few hundred feet above the ground, for twenty years, when it has no internal power?  Hm?