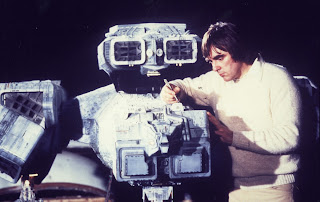 When I spoke to Brian Johnson, it was only four hours after the finish of the 1998 Oscar Ceremony – the year of Titanic. It transpired that we had both stayed up all night and watched it, so neither of us were as sharp as we might have been.

For Johnson, of course, The Oscars have a more personal resonance, because he is on the committee that selects the nominees for the Best Special Effects category. He earned this particular distinction because he is himself a multiple Oscar-winner in that category, and the first such award he picked up was for Alien.

After discussing Jim ‘King of the World’ Cameron’s over-night success with his little low-budget film about a ship going down, we got down to business. I began by asking Brian how he became involved as Special Effects Supervisor on Alien, and to explain quite what that job entailed ...

“Right. Well, I’d just finished Space 1999 (1975 – 7) and a pilot movie called Into Infinity (1975), both with Gerry Anderson. Space must have been seen over in the States by Peter Beale of Twentieth Century Fox, who contacted me and asked if I’d be interested in getting involved in this thing called Alien. This was before Ridley came on board, it was still going to be a Walter Hill film. I went for a meeting, talked to Walter, his fellow producer David Giler and Dan O’Bannon, and we hit it off straight away, so I got the job.

“As to what a ‘Special Effects Supervisor’ actually does: you have over-all charge of everything that goes on in terms of visual effects in the movie, in conjunction with the director.

“Your first job is to work on the script, breaking it down into effects sequences and deciding what needs to be done. You talk to the director and the scriptwriter about what they feel should be where, and work through it that way.

“This was going along quite well, when I got a phone call from Fox telling me that Hill had quit - which meant we were back to square one. Fortunately, Ridley was a whole different ball-game. Very refreshing. He had been a production designer, and was a storyboard artist, so he sat down and sketched all these ideas he had, and we worked together on the designs supplied by Ron Cobb and Chris Foss and the rest.

“The Nostromo started off as a tiny scale model, which I showed Ridley, because two-dimensional drawings give you no idea how a model will look under lighting. Ridley wasn’t happy, he said ‘let’s add this’, and ‘change that’. Then we set about building the full-size model and, because Ridley is always changing things, we found ourselves extending it and extending it, and so it went on. We started it in pre-production and finished it off in post.”

Ron Cobb credits you with co-designing the Nostromo with him, Chris Foss and Ridley.

He said that he and Foss couldn’t decide where to stop, they just kept on changing things, then you came along, told them their time was up, took away there designs, and made sense of them all!

“Well, that’s basically what I did.”

Given that the ship was going to be seen in some very long, very slow fly-bys, it had to stand up to close scrutiny. The model was festooned with details, which conjures the image of you and your team sticking hundreds of bits of Airfix kits on a big model, until its completely covered.

“Lang was a German-born NASA artist who, in conjunction with Tony Masters, Production Designer on 2001, set the feel for how all those little bits of plastic would go together. Doug Trumbull and I got involved in a lot of the modeling, based on Harry Lang’s style, with all these thin overlapping plates at weird angles, rectangles glued together to build up sub-structures, layer upon layer.”

So he is largely responsible for the ways spaceships in films looked for the next thirty years?

“Yeah, to a degree. Lang is quite an individual designer, an interesting man.” Anyway - back to ‘Alien’ - it is true that I put Cobb and Foss’s designs into three dimensions, so I suppose I had an influence, in that respect.”

I gather Ridley likes to operate his own cameras, even on effects shots?

“Well, he didn’t on Alien, because he was so busy elsewhere, but he had tremendous input, of course. By that point I was actually working on two pictures at once, as I was also involved in the pre-production of The Empire Strikes Back.

“Lucasfilm had done a deal with Fox [who were distributing box Alien and Empire] where I could work on Alien until Empire started. Now, as it was, the start of Empire got put back a bit, but the completion of Alien was pushed back a lot, so we finished shooting at Shepperton, everything was struck and we moved to Bray, where all the sets were rebuilt, one by one. Then, over a six month period, Ridley practically shot the film again. It wasn’t just a little bit of re-shooting, it was serious amounts of add-ons and alterations.

“Meanwhile, we had two special effects stages there, and we were cracking on with all the model stuff. The decision was made that, because we only had a very few exterior shots, we weren’t going to go to the vast expense of motion control. It just wasn’t required - we had to make the exterior look as attractive as possible, but there were no moving parts, and no complicated maneuvers to film, it was just drifting through space in a very measured manner.”

Did you get to pick your own team?

“Oh yeah, I have a different team for every picture. If a film requires a certain area of expertise, say we have a lot of aviation effects, then I’d pick a team of guys whose engineering skills are aviation oriented; whatever suits the movie.”

So you weren’t just shooting models

“Nope, I was all over the place. I had a crew on the floor, Philip Knowles, Dave Watkins, Nicky Allder. As supervisor, you can’t stick your head in one hole and leave it there for the whole movie, you’ve got to be everywhere or else you miss things. If you’re not directly connected to what’s going on, you can step back and see things that the floor crew working on it maybe can’t see, ’cos they’re too close.

“But you still have to be flexible. Initially it was to be Jon Finch, not John Hurt, who would play Kane. When he had to leave through illness, and the producers were hunting for a last-minute replacement, we had to shut down for two weeks - and Ridley took the opportunity to do some rethinking. He’d never been entirely happy with the set of the command module, so had the roof brought down four feet, so it was right on our heads. Because that way it fitted the 2.35 to 1 ratio of the cinema screen far better than the way it was.

“I also have to commit to a project long before any of the designs are ready for the screen, in order to get the thing under way. In other words, I look at the script and arrange people and resources for what’s needed and when.

“Take The Chest Burster, for example. With a big, complicated sequence like that, I had to decide very early on whether it would be shot second unit, or main unit, and how we would plan it. Some of the earliest decisions you make are - what’s going to be a model, what’s going to be blue screen, what’s going to be in-camera - because they all have to be planned for in different ways.

“Almost the very first pre-production meeting we had, long before the cast and crew were involved, I’d already decided that we would have to do it by splitting the top of the kitchen table and putting the actor’s body through, then building a rig over the table to simulate the actor’s body. We made a life-cast of Jon Finch, then again for John Hurt, so we could build a chest cavity that a device could burst out of, which would be pneumatic or hydraulic or something - I didn’t know yet - but it would ram this thing through the t-shirt, releasing bags and bags of blood. Mint-flavoured blood, as it turned out!

“Then, of course, there was the abattoir offal, which we needed bags of, every day. One of my chaps, David, would go down to the abattoir in the morning, to pick up a fresh batch, which we would douse in bleach to sterilise it, then pick out the pieces we needed for the set.”

And I bet, as he was carrying a bin-liner full of giblets back to work, David was repeatedly trying to remind himself about the glamour of working in the film business.

“Yeah. Although, it was David who found the lining of the pig’s stomach, that thin, lacy layer of fat that we put in the alien eggs. In that film, if it looks organic, it probably is.
.
image shows Brian Johnson on the Alien sound stage "widgitting" The Narcissus.
.
Posted by Cellulord