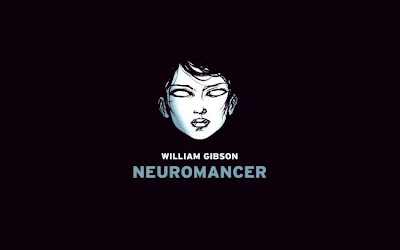 It has been announced, here, that Neuromancer the Movie is finally (probably) going to happen.  If this comes to pass, this is a cause of no small celebration.  It is also the wafer-thin excuse I needed to post this previously unheard audio interview I conducted with Mr. William Gibson back in the mists of 1993:

I think part of the reason for this was my BBC training, back in the early 90's, when we were admonished for only having guests on the phone.  The local station I worked at had a network or remote recording booths, mobile outside broadcast units and expensive quarter-inch tape recorders ... There were really no excuses for having a guest on the phone.

Therefore, when the walking legend who is (and was) William Gibson was in the UK - promoting his book Virtual Light, which would become the first of his 'Bridge' trilogy - well, I just had to arrange to interview him in person.  It would have been rude not to.
So, I turned up at Andromeda Books with my trusty Uher, where Mr. Gibson was conducting a very civilised signing session and holding court.  I waited patiently in the corner and, after the crowd had died down, was delighted that the equally great and probably as legendary Rog Peyton (whose domain Andromeda Books was) closed the shop for half an hour so I could conduct my interview in peace.

As I remember it, the interview began well.  I was nervous and more than a little star-struck, but I had done my research and prepared my questions.  Then I glanced at my sturdy recording device and noticed that the wheels weren’t turning.  The all-important red light wasn’t on.  The battery had died!
A real dilemma.  Did I carry on with the interview, bluff it out or fess up and look a fool?  Well, I’ve never been afraid of looking a fool – so I came clean.  Apologised profusely, blamed myself for not checking the battery, and threw myself on Mr. Gibson’s mercy.
He was extraordinarily gracious.  I didn’t notice even a momentary flicker of annoyance cross his face and, indeed, he was most concerned for me.  He even told me an anecdote, as we packed up and Rog re-opened, concerning the journalist Mikal Gilmore, from an obscure little rag called Rolling Stone, who had serious microphone problems when he interviewed Bob Dylan.  I guess it can happen to the best of us.
We left on good terms, laughing about the foolishness of the situation and I headed back to the studio, trying to think of convincing excuses.
When I got back, there was a message from the publicist telling me that Mr. Gibson had been concerned that I hadn’t got my interview and did I want to reschedule for the next day?  He would be in London by then, so we would have to do it on the phone, would that be okay?
I was honoured and truly blessed.
So, I hate phone quality radio, but not on this occasion.  On this occasion, he saved my hide and that’s great in any quality!
So here, completely uncut, is that interview.  Never before heard in this form.  You’ll hear my nervous, rambling questions; you’ll hear Mr. Gibson’s warm, witty and immensely good humoured answers.
Oddly, it feels right to hear this ghost from a distant past.  I barely remember that life now, but here it still exists, recorded, archived, digitised and cast broad through a medium which, at that time, only existed in the minds of Mr. Gibson and his contemporaries.  How thoroughly appropriate.
Ladies and gentlemen, a little under half an hour in the company of Mr. William Gibson circa 1993.  Truly, the post-modern sublime!
Latest tracks by cellulord

The article this interview later turned into, which was also an in-depth review of the movie version of Johnny Mnemonic, is here.