FILMS YOU MUST WATCH BEFORE YOU DIE - part one

A new project for The Cellulord, which is going to take me a few weeks to complete!  So, I thought, if I'm going to embrace the interweb's fashion for lists, I may as well go for the ultimate list.  Thanks to Tim for giving me the idea and providing me with the initial list - I pinched it from his website here - then I tailored, tooled and tampered with it to produce the thousand-strong dream team you have here.

I brought it up to date, upped the number of British films represented here, and the number of animations and I added a lot of genre films because, well, they're fun.  What's the point of being forced to watch films that aren't fun?  That's a rhetorical question; you don't really need to tell me.

Asking you to read through a thousand films is a big ask, even for you, constant reader, so I'm chopping it up into sections for ease of mental digestion.  This part, as its title might indicate, deals in one sweeping gesture with the first 35-or-so years of cinema before sound films became 'the norm'.

I'll annotate some films ... Others, I'll just list.  This part will be more interactive than the ones that follow it because many of the films are freely available, in their entirety, to watch on the web.  So, to help you start ticking them off, they're here to enjoy and be amazed by.

Right, without further ado ... Let's get stuck in.  I think this'll be the beginning of a beautiful friendship ...

Yes, as we must begrudgingly admit, the French got there first.  In pretty much every technical and academic development worth a damn in film history, the French got there first.  The Lumière brothers invented the film camera (and, yes, there is much contention about this, particularly from the Edisons, but for the sake of my argument, we'll go with the French) and Georges Méliès was the first film-maker to experiment with the camera tricks which would evolve into the special effects the industry can now not function without. 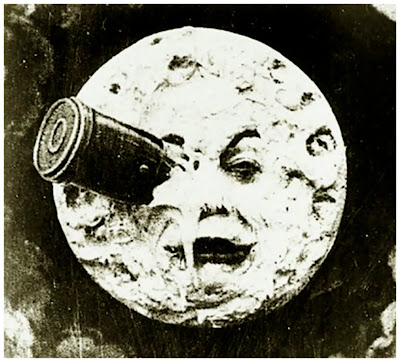 His most celebrated film is this, which you can watch in its entirety below, filled with images you will recognise as they have been honoured, borrowed and parodied untold times.

02: Great Train Robbery (1903)
Edwin S. Porter's response was to create a very American film which is generally recognised as being the first to have what we would now recognise as a narrative, with one event logically following on from the next.  It was also, reputedly, the first film shot on location and it was the first film to guide the audience's attention by editing to a close-up. 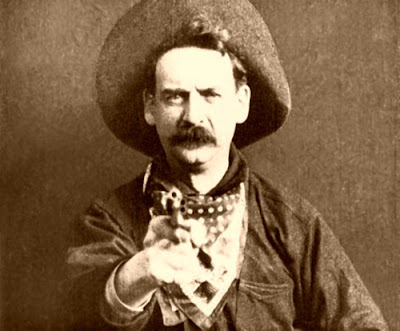 Again, this close-up has been much emulated throughout the history of cinema - and the idea of pointing a gun directly at the viewer in order to involve them more deeply in the film, has directly influenced everyone from William Castle to Alfred Hitchcock and Martin Scorsese as well as being the sole motivating force behind the present blight of 3D.  Oh, you have much for which you must answer, Mr. Porter!

Here is the film entire:

03: Frankenstein (1910)
Produced by Edison, this was the first adaptation of this book.  Like the Verne-inspired Trip to the Moon, this demonstrates from the beginning that cinema has an affinity for adapting literature of the fantastic!


The film in now in the public domain (at least in America) so you can download a copy to keep from here, or simply watch it below.


04: Birth of a Nation (1915)
D. W. Griffith was the George Lucas of his time.  And James Cameron.  Both.  He was the first star director, the first director to demonstrate unrestrained ambition in his film-making and created much of the film grammar we now take as granted.  Just because things hadn't been done before was no barrier to Griffiths; quite the opposite.

Birth of a Nation was one of the first 'feature length' films and it was so successful it had a direct influence over the future of the still-fledgling movie industry in America.  It also stirred up a storm of controversy because it is, essentially, a love-song to the Ku Klux Clan. 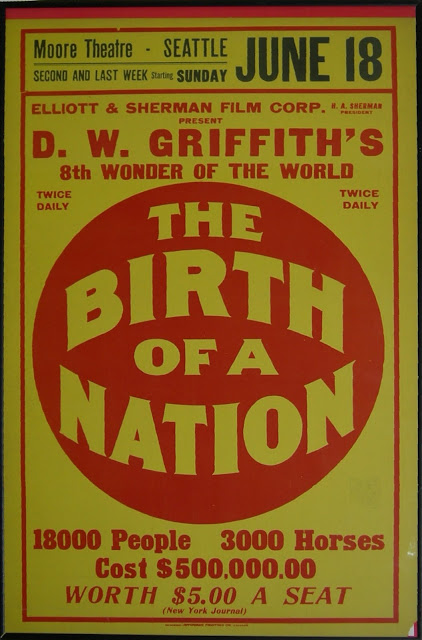 Still a deeply troubling film, this is a tour de force of audience manipulation and, the first time I saw it (a 16 mm print projected onto a classroom wall in absolute silence in the early 1980s) I actually found myself rooting for the clansmen by the end.  Which is a testament to just how powerful good film-making can be!

You can see the whole film here:

It's worth noting that the title of this film has latterly been reclaimed, in an attempt to redress the balance and present a more enlightened view of American history.


Such was the controversy generated by Griffiths' film that he felt that he needed to respond immediately - so his next film, produced in just a year, depicts the entire history of human racism and ... intolerance.

05: Intolerance (1916)
This film interweaves four thematically-related plots in a way that seems extraordinarily sophisticated and just shows how few strides film-makers have really made since those early days!

Here, again, is the whole movie:

It is worth it for the Babylon sequence featuring the most extraordinary set ever built for a movie: 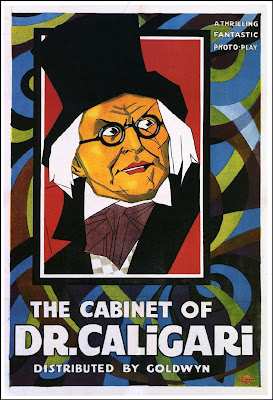 An extraordinary visual treat, the influence of which still echoes through art-house and avant-garde cinema to this day!  Watch it in its entirety here:


07: Nanook of the North (1922)
A pioneering documentary - even if director Flaherty's working practices are not what we would now consider documentarian.  Here it is, complete:

08: Nosferatu (1922)
The original vampire movie.  Available now in a plethora of formats, including streaming over the interwebs ...

Lon Chaney famously applied all his own make-up which, in those days, comprised putty and wire and adhesives that you nowadays wouldn't put near your face for any money.  It is difficult to imagine the suffering he put himself through but, ninety years later, you mention him to a movie make-up artist today and see the admiration in their eyes. 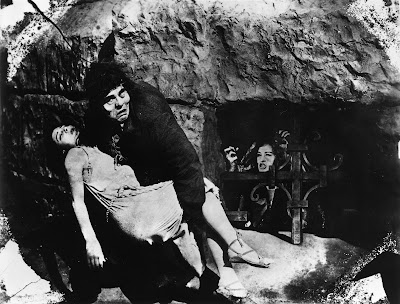 Once again, you can watch the whole movie in all its spectacle and grandeur ... On a tiny little YouTube screen:

10: Safety Last (1923)
This is the one where a man in a straw boater with only one good hand, is filmed climbing up the outside of a building and, as in the photo below, it isn't a stuntman, it isn't a special effect, it's really him.  So successful was this film, Harold Lloyd found himself climbing many more buildings in his career.


And here's a useful little featurette, explaining how that most famous of images was achieved ...

Cecil B. DeMille, the spiritual successor to Griffith, has his first stab at this tale. 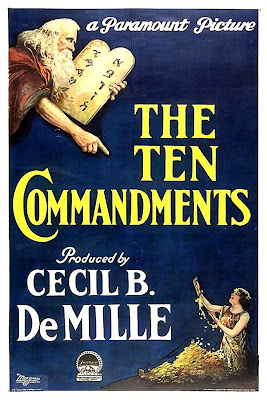 12: Thief of Bagdad (1924)
This film features the most ambitious special effects for the time.  This film is just all-round great fun, featuring the world's first action hero movie star! 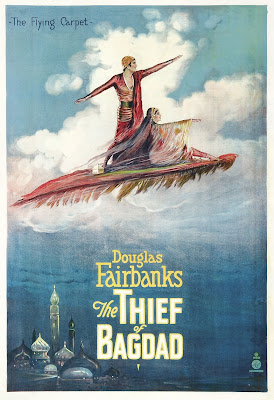 16: Freshman (1925)
17: Ben-Hur (1925)
Frankly, not as impressive as the re-make, but look how far movies had come in just the ten years between Birth of a Nation and this.  Remarkable!   It's possibly also worth mentioning that, such was the popularity of Lew Wallace's source novel that, even in 1925, this wasn't the first screen adaptation, that came in 1907!

20: Gold Rush (1925)
There was a time when Charlie Chaplin was the most famous man in the world - seventy years before internet made such things common-place.
21: Big Parade (1925)
22: Metropolis (1927)
Goes without saying, if you only watch ONE of these silent films that you must see ... It damn well better be this one!

I won't dilute it by letting you watch a ropey quality download of it, go buy the Blu-Ray and prepare to have your world rocked.  Here's a taster ...

27: Napoleon (1927)
The artistic ambition and inventiveness of the silent pioneers is something that is almost completely forgotten nowadays, but there was no film of the late silent period with greater ambition than Abel Gance's Napoleon.

Napoleon also played a key role in the re-discovery of silent greats in the 1980s, as it got its hooks into Kevin Brownlow, who has dedicated 40 or more years to preserving these films.  His passion and expertise and knowledge is inspiring.  I give a damn about silent films because of him.  Listen to him discussing Gance and Napoleon and see if you feel as inspired ...

32: Steamboat Bill, Jr. (1928)
This was the pinnacle of slapstick - when the actor as stuntman achieved a level of sophistication and physical perfection unequalled since.  The storm sequence is one of the greatest pieces of physical comedy ever created.  You can watch the whole film here:

Or just that incredible storm sequence, below.  Again. it is worth remembering that there are no visual effects here, this was all done full size, for real!  If the movie's star had been six inches out of place he would have died!

33: Blackmail (1929)
Yes, this was the first British talkie, not that it was intended to be such when they started shooting, but talkies came along so suddenly, they had to re-think and re-shoot.  Still, it made Hitchcock's career for him!

34: Man with the Movie Camera (1929)
35: Pandora's Box (1929)
The tragedy of Lulu, as portrayed by Louise Brooks, whose astoundingly contemporary sexuality still has the power to ensnare ... 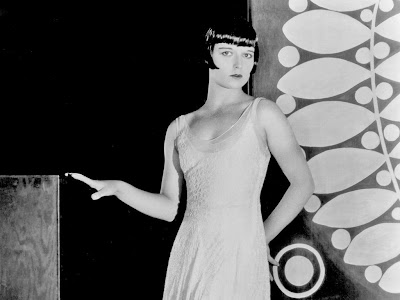 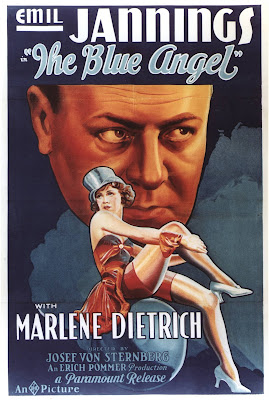 38: L'Age D'Or (1930)
It's a film about a big door.  Okay, no it isn't, it is the second of Luis Bunuel's surrealist masterpieces ... Funny how surrealism thrived in the days before dialogue, when so much of the movie occurred in the viewer's imagination!

Whew.  So, we made it ... And we're only 38 films in.   Trust me, as we get into less esoteric territory, I'll pick up the pace and be less and less helpful.  You'll have to start finding the films yourself!

Part two of this humongous list - The Thirties - is here ...
Posted by Cellulord