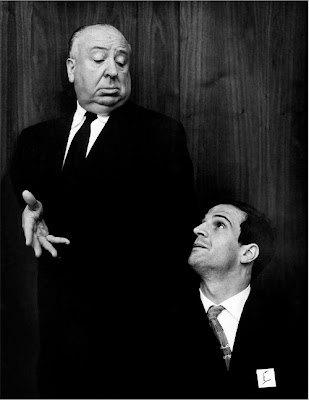 You know the moment ... Indy is standing in The Map Room, his wooden staff is just the right length and, as the sun rises, a beam of holy light tells him exactly where he can find The Ark of the Covenant.  John Williams' best score soars to a spine-tingling climax and, if you're anything like me, the hairs stand up on the back of your neck.


Well, last night, I was wandering through the website feeds that tumble into my Facebook account and noted one from the very excellent /Film entitled Listen to 12 Hours of François Truffaut interviewing Alfred Hitchcock.  Cue holy light.  Cue violins.
See, more than twenty years ago, when I was at college and first discovered that one could actually study films, the first film we looked at was Psycho and, upon visiting the college library and discovering a whole shelf of books about movies, the first I checked-out and read was by François Truffaut, about his idol Alfred Hitchcock.  The book was simply called Hitchcock by Truffaut at the time, although it is now known as A Definitive Study of Alfred Hitchcock (which it absolutely isn't, but still ...).
I knew Truffaut.  Or, rather, I thought I did.  I'd seen him act in CE3K (1977) and watched at least one film he'd directed: Fahrenheit 451 (1966).  I'd never heard of La Nouvelle Vague at that point, but simply to think that a maker of films could also be a fan of them was a revelation to me, and the insight one director could bring to the work of another was inspirational.  A battered, old, third-hand copy of that exact edition now has pride of place amongst the hundreds of film books that crowd my shelves.  It was my introduction to the head-swimming world of film analysis and critique.  And you never forget your first!
The book is, essentially, an extended conversation between two cinema giants conducted in 1962 when Hitch was still at the height of his considerable powers and Truffaut was just approaching his ('62 is the year Jules et Jim was first released).  I don't think either of them would have claimed that they were equals but, as time passes and Truffaut's body of work grows in esteem, the gap between them narrows.  One could only imagine what the actual conversation was like before it was filtered, edited and transcribed into the printed text.
Well, now we need to speculate no more.  The tapes have turned up and quietly, inconspicuously, they have been appearing on the internet.  Indeed, they've been sitting there since 2008 on a cultural blog with the delightful name If Charlie Parker Was a Gunslinger, There'd Be a Whole Lot of Dead Copycats, just waiting for the world to discover them.  The blog is oddball and wonderfully funny and, now I've discovered it, I'll be returning often!
It seems that these treasures were stumbled-upon by the curators of another cultural commentary site, Open Culture who discovered that the audio files had been gathered together by the editors of the Hitchcock Wiki here, and are now also available for download.
Thanks to the frenzy of interest this revelation has engendered, these download sites became massively over-loaded and crashed.  But, as I found when I visited another site carrying the story: Filmdetail, there are plenty of mirror sites so, if you want them, go hunting, you'll find them.  I did.  No Nazis, no snakes.
Twelve hours of unguarded discussion with the notoriously deceptive and mischievous Hitchcock is an extraordinary find.  It's cultural value is almost beyond calculation for students and lovers of film.  Now that this material is out there, it won't be long before someone provides a translation of the French elements, and other people will find uses for this audio ... DVD audio commentaries, perhaps?  They will certainly become an essential teaching tool for the next generation of students learning that it’s okay to study film.
I can't begin to tell you how excited I am by this.  I certainly know what I'm doing this weekend ... I'll be spending it with Hitch!
Posted by Cellulord