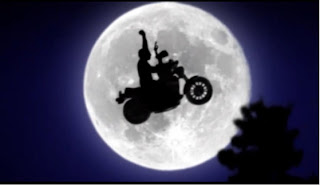 Here’s a thing …
Music mash-ups are, in case you don’t know, where someone takes two or more pieces of music and mixes them together to produce a chimera which is a separate beast but has elements of both (or all) its parents.  Ideally, they should work as pieces of music in their own right, but they also offer up the enjoyable experience of allowing you to play ‘spot the sample’.
Now, the same aesthetic is often employed to the visual medium as well, using the editing software that is easily available these days.  Let’s face it, if this were not so, there’d be precious little on YouTube.
Well, movie trailers are fair game for this and fans with an exhaustive knowledge of film and a lot of time on their hands, have been putting together faux movie trailers for years.  The results are often indifferent at best; but sometimes the care and attention the fans lavish on these short films pay dividends and produce wonderful, hilarious, intoxicating ‘what if’ scenarios.
Such as, what if Steven Spielberg decided now was the time to do a sequel to E.T.:
Isn’t that fantastic?  Utterly convincing.  If that were a pitch it would be green-lit and in our cinemas summer 2012.  Click on the video, go to his YouTube page and give the guy some encouragement, I’d love to see what else he comes up with.
Here is a slightly different take on the same idea – but this is a CGI animation which is delightfully impressive.  It imagines a mash-up of two of 1968’s sci-fi events and yet is a short film in its own right:
But now we come to a man who has, in a very short time, elevated this to an art-form.  He creates trailers for all-to-recognisable films from the geek generation using nothing but footage from films from classic Hollywood.  His conceit is that the early films of Spielberg and Lucas weren’t just inspired by the movies they saw as children in the fifties – they were actual remakes of the films he has ‘unearthed’.
He calls his trailers ‘Premakes’ and they verge on the genius.  Ladies and gentlemen, I give you the work of Ivan Guerrero:
Okay, you get the idea?  Ivan’s mission is to make an instant-gratification, short-term-memory culture care about old movies and, therefore, he also takes the trouble to tell you where he finds his material, in the hope that his viewers will pick up some of the old films for themselves:
Now we move onto an even better example:
Lucas has always been open and honest about the inspiration he took from Flash Gordon; this video makes that overt from those who refuse to believe.  Again, he provides us with his sources, showing the pain-staking shot-for-shot work he does:
And finally, what I consider to be his masterpiece, the 1951 version of Raiders of the Lost Ark, starring Charlton Heston:
Isn’t that extraordinary?  I particularly love the fact that he has converted this to black and white, because I have always maintained that Raiders, one of my absolute favourite films, looks even better in black and white.  It’s mostly made of an all-but-forgotten 1954 film called Secret of the Incas, but here’s the original footage in detail:
Now, if you want to know more about the intriguing Secret of the Incas, there’s a fansite dedicated to it here.
Meanwhile, Ivan’s own site is here.  And his YouTube page is here.  Wander over; tell him The Cellulord sent ya!
So, can you find any equally cool examples of this fan-driven art-form?  Share them with us in the comments if you have!  Cheers.
Posted by Cellulord