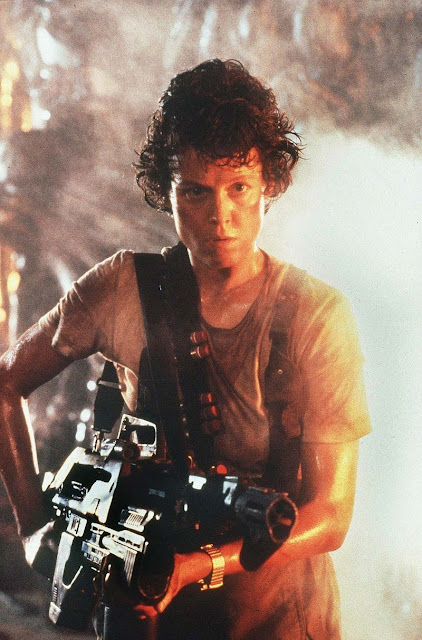 Back in the days when I taught Film Studies, one of the subjects that proved most illuminating to my students, (because it was something that, by and large, they hadn't noticed) was the function of female characters in films.  Pretty much the only positive female roles they were aware of, are Sarah Connor in The Terminator films (1984 and 1991) written and directed by James Cameron and Ripley in Aliens (1986) ... written and directed by James Cameron. Even my female students were not conscious of just how universal is the subservience of female characters.

Well, I've just discovered something that would have really helped them understand - and will again if I ever find myself standing before film students.  It's called The Bechdel Test.  It's been doing the rounds for twenty-five years now, but I'm embarrassed to admit that I've only just stumbled onto it.

It began with cartoonist Alison Bechdel and her strip Dykes To Watch Out For, more particularly, this strip: 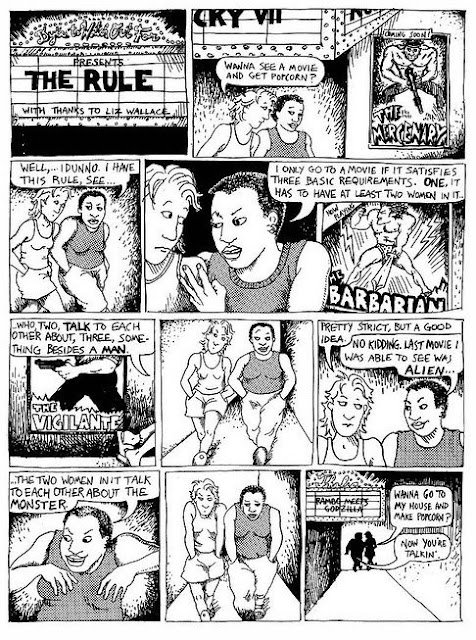 Bechdel's website is here and her blog is here.  Go have a look, especially if you think all comics need capes or sword-wielding children.  S'alright, you can thank me later.

Anyway, I found her work through the Bechdel Movie Test list which is a wiki listing, as you may have gathered, films which meet the stringent Bechdel criteria:

Does a film feature 1: at least two women who 2) talk to each other about 3) something besides a man?

You'd think such films would be easy to find but, sadly, they aren't.  Have a look at the list, it's here and it makes no value judgements about the quality of the interaction between women, which means you may well have issues with some of the films which qualify.  One of the more recent entries, 127 Hours, for instance, do the two girls Aron meets in the desert really say anything of substance to each other that isn't about him?

But the ambitions of The Bechdel List seem to be mostly to acknowledge the presence of women in non-subservient roles whenever they occur.  That is how poor a representation women receive, it's worth noting a woman in a pro-active role whenever it happens, however briefly, irrespective of context and, because of the work in the list, you can see just how rare significant female roles are.  Sad but true.

There is a fantastic illustration of this here, courtesy of Feminist Frequency, who have also created this very helpful and very simple video.  Click and play:

And I found all of this in response to a fascinating article which discusses why the typical Hollywood outpourings are deliberately and persistently designed to appeal to a male audience and why they would be demonstrably more successful if they were more inclusive and appropriate to a female audience as well.  Both Titanic (1997) and Avatar (2009) were designed with both a male and particularly a female audience in mind and they are respectively the biggest and second biggest grossing films at the moment.  They are both, of course, written and directed by ... James Cameron.  Notice a theme developing here?

The article is here on Lucy Vee's essential Write Here, Write Now blog.  Have a read.  Have a chat in the comments box.
Posted by Cellulord