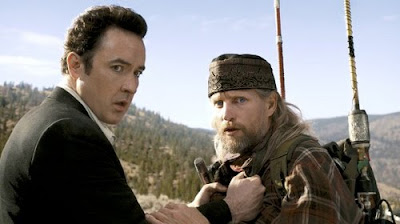 I suppose, if you go to see yet another Roland-Emmerich-Brings-The-World-To-An-End movie, you pretty much know what you’re going to get … bags of preposterously spectacular laws-of-physics-defying special effects wrapped round a soap-bubble plot and gormless characters whose every line is a time-worn cliché. There’ll be a noble scientist, a tenacious layman with kids to protect, a fearless American president (by far the least credible element in any of these films) and no women of any consequence.

But, hey, at least he’s consistent.

What I didn’t expect was to see actors of the calibre of John Cusack and Chiwetel Ejiofor signing on the dotted line. I mean, wasn’t Con Air (1997) enough for Cusack? Or does he think that sufficient time has passed for us to have forgotten?

Here he is unsuccessful novelist and part-time chauffeur Jackson Curtis (yes, really) who takes his kids to Jellystone Park for a trip, clambers over a ‘No Trespassing’ sign and wanders down to a seething dry lake-bad, variously decorated with the cooked corpses of critters. Turns out that here is where the upcoming apocalypse will first make its presence felt. Okay, so he’s not the smartest tie on the rack, but without recklessly endangering his children in this casual manner, he would never have encountered wild woodsman Woody Harrelson who theatrically foretells the upcoming catastrophe, seems to have somehow come into possession of a map that will lead Cusack to potential safety and who also, by the way, will be the first of the roughly six and a half billion casualties to die during the next two and a half hours of movie.

In fact, John Cusack seems to be something of a Jonah Cusack. As well as being at ground zero when it all kicks off, his wife is in the first of several earthquakes that wrack America, and the Russian gangster for whom he is the driver is also one of the select few people on Earth who know about mankind’s last hope for survival.

So, without further ado, the world starts falling apart. Fortunately, Cusack and his extended family are in the world’s fastest and most indestructible Limo, so the earthquake that follows them down the road, and the buildings that collapse all around them, are of no concern. This risible tone is very much reflecting that set by the film itself. California breaking up and sinking into the ground, at the cost of ten of millions of lives, is played for laughs.

But then, the film wastes almost no time considering the human cost of the visual splendour it creates. As Cusack and Co head off in a plane through the toppling tower-blocks (because his kids’ step-dad conveniently happens to be a pilot) we see one shot of tiny people falling to their deaths out of the side of a building which is folding-up around them. This shot was a real stab in the heart, reminding one momentarily of those horrifying September 11th images of tiny ant-like figures throwing themselves out of the World Trade Centre windows rather than face the fire.

The tone is so utterly inappropriate for the severity and intensity of the events unfolding. But, it has all been created with both eyes firmly fixed on a family audience – so there can be nothing too disturbing. Yes, Cusack does get to utter the obligatory single “Fuck” that guarantees the all-important 12A certificate but, thereafter, everything is carefully and reassuringly bloodless to ensure that the under twelves this will attract like bees to honey, will not be unduly traumatised by the extermination of everything. The film’s BBFC ‘consumer advice’ labelled this “Sustained Moderate Threat”. How many people have to die for the threat not to be considered moderate, I wonder?

As always in films such as this, the work done by the special effects teams is much more impressive than that done by the script-writers: The tearing asunder of the Earth is gob-smacking on the big screen and, somehow, watching Las Vegas being consumed by the fires of rising magma seems oddly appropriate.

For me, the one big surprise from this film was that Mankind’s Last Hope actually wasn’t a rocket into space. I won’t give away what it is, in case you are still foolish enough to want to watch this drivel, but it’s fair to say that it is in-keeping with the loosely Biblical themes that run beneath the surface of this film, only becoming apparent during scenes like the fall of Rome where a crack appears symbolically between God and Adam on the Sistine Chapel ceiling, before the whole lot comes down on the heads of the thousands grovelling in St Peter’s Square.

The film’s final act comes down to a race against time against a glaring design flaw in the Escape Plan, the outcome of which is never in any doubt because, well, however much peril Mr. Cusack finds himself in, it’s only ever going to be moderate, isn’t it!

Ultimately, you do emerge from this far-far-far too long film, wanting to congratulate Roland Emmerich for, once again, creating a visually stunning, logically ridiculous and emotionally empty end of the world.

This, then, is how the world ends. Not with a whimper but with a bag of popcorn.

Email ThisBlogThis!Share to TwitterShare to FacebookShare to Pinterest
Labels: 2012, end of the world, fantasy