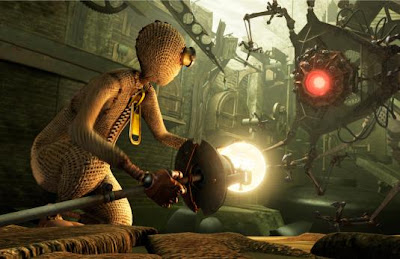 Another film to be so enchanted by the date 2009 it just had to be named after it (all together now: “I didn’t go to see it ’cos I haven’t seen the first eight!” Hur-hur).

This is an animation which, in their capacity as producers, brings together the visionary imaginations of Timur Bekmambetov and Tim Burton, a tempting prospect and no mistake. The film itself is an animation directed by Shane Acker, based on his Oscar nominated 2006 short which you can watch here.

It begins rather like Henry Selick’s Coraline, with cloth puppets being sewn together; but here these puppets are not a vessel for connecting a fantasy world with a real one they are, instead, a time capsule from a desperate, war-torn apocalyptic present to a hoped-for future.

We are told: “ … our blind pursuit of technology only sped us to our doom …” so, once again, we are faced with the dichotomy of a CGI movie, created with the finest, fastest computers modern technology can conjure up, advising us to abandon technology and live a natural life. I imagine we’ll get the same message from Avatar in about six weeks’ time. We’ve certainly had that hand-wringing, brow-furroughed earnestness time and again in the 32 years since Star Wars first employed cutting-edge technology to tell us to turn off our machines and trust to faith.

So, what’s different this time? Well, thankfully, for a CGI animation, this one isn’t in 3D Gimmick-o-Scope, so we can concentrate on the story-telling and leave the sideshow antics to other movies. Also unusually for an animation, we have a gloomy, dark, gothic depiction of the end of times where a few cloth puppets live as scavengers on the wreckage of the fallen civilisation which spawned them. Here they are preyed upon by the last surviving bio-mechanical chimeras, such as the creature they call The Beast which, sporting a bleached cat skull held together with wires and featuring one garish red light-bulb eyeball plus lots and lots of spikes, is one part Bosch to two-parts Terry Gilliam.

Indeed, all the creatures in this broken land seem to made of bones and blades. There is no soft tissue left, the softest material available being the Hessian from which the puppets are woven.

It is not insignificant that these rough-hewn stragglers hide from the night like mice in a church. At one point, the leader of their little community – voiced by the magisterial Christopher Plummer – makes a good point … sometimes fear is the appropriate response.

Throughout their, admittedly rather limited world, the burned-out memories of grand buildings tower massively above them, reminding one both of Terry Gilliam’s haunting 12 Monkeys (which, of course, featured Plummer back in 1995) and, of course, of the architecture of Bekmambetov’s own Russian homeland.

Plummer (puppet number 1) has been keeping his group safe these many years, through caution and stealth whilst waiting, presumably, for the inevitable end to come and hoping that, for his people, it will at least be a peaceful one. Then 9 arrives, newly awoken, full of questions and the arrogance of youth, who inadvertently sparks off a catastrophic chain of events. 9 awakens The Machine, the great self-aware device which wrought the destruction of mankind with its mechanical weapons and which, once awake, resumes building its wartoys, now with the single-minded purpose of capturing the numbered puppets and draining them of their life-force.

At one point they are attached by a sock-puppet-snake which was chillingly conceived and is terrifyingly executed. The fires burning in the heart of The Machine’s dark, Satanic factory remind one of an extermination camp, surrounded, as it is, by bunkers, barbed-wire and trenches.

All of this is played out on a canvas splashed with a quite exquisite palette of colours. Stark blues and greys are offset with burning reds and oranges. The imagination unleashed by this film and the artistic eye for composition, colour and texture unleash a barrage of emotions in you as you watch.

Lord, this film was gorgeous on the big screen. Tragically, inevitably, it didn’t last there long enough for many people to see it. But, on Blu-Ray this will be a Must Own.

The story is fairly flimsy, the characters are the expected archetypes, the denouement almost inevitable, but the execution is so deliciously complex, the world so heavy with secretive wonder, the visuals so mouth-dryingly dramatic that I could forgive it almost anything, even its disappointingly short 79 minute run time.

If the end of the world can look this good, it should have ended years ago.

Email ThisBlogThis!Share to TwitterShare to FacebookShare to Pinterest
Labels: 9, animation, end of the world, science fiction