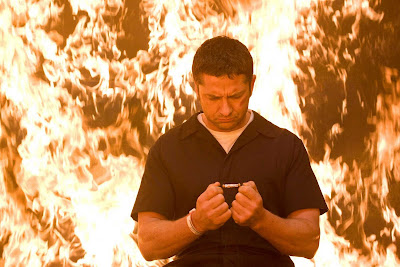 I like Gerard Butler. I’m the one person on Earth who liked Gamer. I thought he was brilliant in RocknRolla last year. I appreciate his unimpressed, sardonic, Celtic no-nonsense-ness. He humanises (and humourises) extreme, uncommunicative and occasionally one-dimensional characters. A thousand years ago, when I was at college, the ultimate accolade one could bestow upon another was the assertion: “I’d buy him a pint”; well, I’d buy Butler a pint!

Here, in the frankly awfully-entitled Law Abiding Citizen, he plays Clyde Sheldon. His story begins without preamble but with a knock at the door, two weapon-wielding villains burst in. Stab-stab, scream-scream, kill-kill. The destruction of Sheldon’s life is done with far greater economy and less lascivious attention to the gory details than, say Death Wish (1974) or Death Sentence (2007)

Cut to ambitious, politicising Assistant DA with the deliberately pale name of Nick Rice, played by Jamie Foxx, whose speciality is creating the illusion of justice. He cuts a deal with Darby, the home invader who raped and murdered Sheldon’s wife and daughter. Darby blames the murders he committed on his henchman, who will get the death sentence while he will be out in a few years. Sheldon will not be put on the stand, the jury will not hear his testimony and justice, in his eyes, will not be served. When he protests, Rice simply assures him that, in the judicial system: “It’s not what you know, it’s what you can prove” that matters. You just know that Sheldon is going to make him eat those words, along with Darby’s repeated assertion that “You can’t fight fate”.

Foxx was obviously drawn to this project because it gave him the chance to portray a bad guy who is, really, just a false hero. He isn’t a bad person and he is wracked with guilt over his actions, but that doesn’t stop him from profiting from them. Of course, the family he goes home to has to mirror that which Sheldon lost.

Fast-forward ten years. Sheldon suddenly and unexpectedly reappears, determined to right the wrong that was done him. He arranges for the painful death of Darby’s home-breaking henchman, then kidnaps Darby himself. Unfortunately Christian Stolte, who plays Darby, looks distractingly like Johnny Vegas, which does somewhat undermine the tension in the torture scene where he is systematically shopped up.

The narrative hook is that Foxx has him chained-up in a maximum security prison and yet still he seems able to orchestrate the untimely demise of everyone associated with his original court case. You see, Butler was a weapons designer working for the CIA, his specialty was James Bond type gadgets which could kill people in exotic ways from a long distance. Not the kind of guy you really want to annoy, it turns out.

As we proceed through this neither-fish-nor-fowl plot-line, there are one-or-two surprisingly effective cattle-prod shocks, all the more effective because, unlike in a stalk-n-slash film, you don’t expect them here. But, arrayed against these are some contrivances of which even a Bond movie would be ashamed. In the film’s silliest scene, he sets up an automatic rocket-launcher at the side of a road in, significantly, a graveyard and three car-fulls of body guards fail to spot it before it opens fire. Headstone, headstone, rocket-launcher, headstone … yep, everything’s fine here!

Like Foxx, Butler will have also been drawn to this for the moral complexity of his character and the range of emotions it lets him essay. Sheldon swings from bumbling innocent to cunning super-villain to raving psycho and Butler relishes each performance equally.

The damage done to him first by Darby then by Rice runs deep and has undermined his sanity. Therefore, like Rice, he isn’t a clearly defined bad-guy. But, given the amount of ‘collateral damage’ he is responsible for, he clearly can’t be mistaken for a good-guy either. They are both grey and grey tones lead to a lack of contrast.

Visually, the film is also grey and lacking in contrast, in-keeping with director F. Gary Gray’s pallid career. He’s had several chances to make powerful, imagination-grabbing films: The Negotiator (1998), The Italian Job (2003) and Be Cool (2005) and succeeded in making each of them indifferent, compromised and forgettable. This is, therefore, entirely consistent with his career so far.

Ultimately none of these characters are especially redeemable. The moral core of the tale is clouded by compromise and the proceedings leave something of a bad taste in the mouth. The film tries to be serious, then flies off into fantasy as the final act unravels ever-more ludicrous plot twists, so it succeeds in being convincingly neither.

I rather felt that this was a film which, in some alternate dimension somewhere, Tony Scott could have made much more of. Sure, it wouldn’t have had the gritty dramatic edge, and yes it would be far sillier, but the transition from serious drama to inconsequential revenge fantasy would have been less jarring under his direction. Of course, he would have cast Denzel instead of Jamie and probably Russell Crowe instead of Butler. But I can’t escape the suspicion that the end product would be far more satisfying and would probably address the issues at hand far more successfully.