MEN WHO STARE AT GOATS 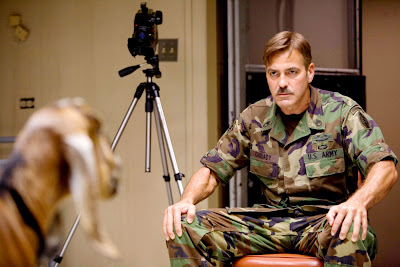 .
This film was co-funded by the BBC … so some small part of your licence fee was spent ensuring that George Clooney continues to have a crust to eat and a warm bed to sleep in. Hope that makes you feel good.

I’m sure George was paid far more than Jon Ronson, on whose book and investigative journalistic instincts this film is based.

Ewan MacGregor plays Bob Wilton, a journalist – not even remotely based on Ronson – who decides it’s time to make his journalistic career by heading out to Iraq to see if he can find something interesting going on there. It’s 2003, there’s a war on, shouldn’t be too hard. Now, casting MacGregor, a Scot, to play a frankly unconvincing American journalist (after his celebrated turn as an unconvincing Irish priest in Angels and Demons) seems a tad odd. But then the film-makers’ thinking becomes clear when we begin to encounter a steady stream of persistent Star Wars references. Essentially, MacGregor was cast simply so, when Clooney tells him that the secret military operation he was part of was called Project Jedi, he can ask: “What’s a Jedi?” And that’s it. He was cast simply so they could (repeatedly) employ an inter-textual Star Wars gag.

Okay, so that’s maybe a bit disingenuous, as MacGregor generally comes across as normal and likeable and Bob needs to be both of those things to throw Clooney’s mad-eyed ‘Jedi’ psych-corp soldier into stark relief. Of course, Clooney’s Lyn Cassady comes across as the exemplar of normalcy compared to an all-but unrecognisable Jeff Bridges’ Bill Django, initially only seen in flashback, who believes that the path to creating super-soldiers is to embrace ancient wisdom and new-age practices. These long-haired, chilled out and laid-back soldiers form the core of The New Earth Army.

Django (and his disciple, Lyn) believe that a man finds his ‘optimum trajectory’ (his destiny) where he least expects it. Meeting Lyn was Bob’s trajectory and it ultimately leads him into a chaotic battle between Lyn, Django, the assembled might of the American military machine and Larry Hooper, a jealous ex-New Earth soldier played with typical relish by Kevin (I only had my eyes done so I’d look younger in the flashbacks) Spacey. All of this culminates in the whole army, tripping its collective tits off on LSD, charging around the desert in scenes which reminded me (not accidentally, I suspect) of Bob Rafelson’s Monkee movie Head (1968).

It’s possibly worth reminding the casual reader at this point that the film is a comedy. Not a throwing-my-popcorn-up-in-the-air-I’m-laughing-so-hard-I-can’t-catch-my-breath comedy, but a wry, cynical, whimsical comedy … very much in-keeping with the style of writing in Ronson’s original book. Of course, under all this whimsy, there is a sharp, incisive deconstruction of America in the age of the Star Wars Generation. As Clooney’s frequent forays into political film-making have clearly demonstrated, he is a man who has little sympathy for the gung-ho, wild-west mentality which, until quite recently, yee-hawed it’s way down the corridors of The White House. That was an America that believed in super-heroes, in Jedi Knights, in the undeniable truth of a nation’s manifest destiny. It believed in the magic of the Force and in the simple, easy-to-identify villains on The Dark Side. It believed that Iraq and Afghanistan were mere rebel uprisings that could be quashed with irresistible fire-power. Maybe the film’s constant Star Wars references and similes are a way of getting the afore-mentioned Star Wars Generation to give a damn about politics again.

Looked at against that background, this film is really Kevin Spacey’s chance to play Darth Vader. Bridges gets to be an acid-casualty Obi-Wan, MacGregor becomes Luke and Clooney is Han Solo, able to do the Kessle Run in twelve parsecs, fuelled only by a bottle of beer and a Boston CD.

The film blatantly states that America under Bush is the Empire under The Dark Side. Cowardice, chaos and compromise have led to a condition of madness running unchecked through the land and all those who supposedly represent her. Well, this isn’t exactly news, guys.

As for the performers, they have a uniformly light touch, they’ve all done this sort of thing many times before. Clooney is very comfortable being directed by his ex-writing-partner, Heslov (they wrote Good Night And Good Luck together in 2005). Yet it is still interesting to see him play younger than we’ve ever seen him thanks not to Benjamin Button-style elaborate CGI but through simply wearing a long wig. Bridges, on the other hand, physically transforms himself, several times, as he ages thirty years through the film. For a role which is essentially slapstick, he manages to bring both power and pathos to the table to make it seem totally credible that this man could persuade the most narrow-minded and officious people you can imagine at military high command that he had the key to unleashing super-powers. Why is this film called The Men Who Stare at Goats? Well, I’m glad you asked: Because Django believed that, with sufficient training, a soldier could kill simply with a hard stare … and he used goats to demonstrate his theory.

The real Django must have had the selling skills of a Siberian fridge magnate to persuade the military high command to believe this voodoo nonsense and here, in the fictionalised film version, Bridges makes it all seems so wonderfully, horribly plausible. I’d sign up to his version of the army! Wouldn’t you?

Email ThisBlogThis!Share to TwitterShare to FacebookShare to Pinterest
Labels: comedy, MEN WHO STARE AT GOATS