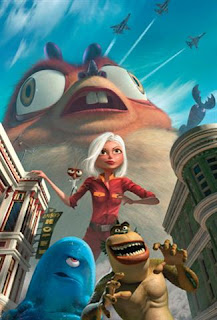 Another great example of a can’t-possibly-miss ‘High Concept’ turning into an average movie. A ‘High Concept’, for the benefit of the uninitiated, is traditional Hollywood jargon for any idea which is so simple, so lacking in nuance, substance or originality, so utterly devoid of anything unique that every single significant element of it can be summed-up in pitch five words long or less. This is felt, in Hollywood, to be a good thing.

So, ‘Jim Carrey is Now God’ would be a perfect High Concept guaranteed hit. ‘Entire World is Computer Game’ is another good one. ‘Will Smith Alone on Earth’ likewise. You’d be forgiven for thinking ‘Will Smith as Drunken Superman’ would have some potential too. But, the ultimate Holy Grail is to reduce that ‘High Concept’ to such a state of simplicity that the entirety of it can become the film’s title. Hence: ‘Monsters versus Aliens in 3D’, what more could a body want?

DreamWorks have now firmly established themselves as the second best animation house out there. After Disney? Don’t be daft. It’s nigh-on a decade since Disney made a cartoon that was fit for use as anything more than a soporific for teething babies. No, silly, after Pixar, who seem to be unassailably brilliant year in and year out.

My point is that DreamWorks' cartoons have their own personality, sassy and sarcastic and aimed as much at the adults as the kids in the audience. This formula stood them in good stead with various Shreks and Ice Ages and there’s no reason for it to falter now.

Consequently, this film is packed to the rafters with sly references to classic SF films of the fifties and sixties. I won’t spoil the fun by reeling them all off here, but let’s just say that a big ole grin spread across my face when a Harryhausen flying saucer swept across the DreamWorks logo at the very beginning.

After this, the film’s opening scenes seen to take something of a left-turn as we are introduced to the small-town world of Susan Murphy, who is getting married to charmless TV-host, Derek, this kitsch-en sink drama leaves the kids in the audience (who, understandably, came expecting monsters or, at the very least, aliens) sitting there kicking their heels and waiting for something to happen. Fortunately, it’s not too long before, out of the blue, the deus ex machina arrives in the form of a meteorite-strike and Susan suddenly starts sprouting into a fifty foot woman (with really stretchy clothes).

In next-to-no-time poor Susan finds herself locked-up in a super-secret solid-steel secret government installation (which bears more than a passing resemblance to both Monsters Inc’s HQ 2001 and Men in Black’s, 1997) with … well, with all the other monsters.

Hugh Laurie is the mad scientist (“I’m not a quack, I’m a mad scientist”), always managing to whip-up some logic-defying gadget from anything he finds lying around, like a few old bits of string and a used pizza-box; while Seth Rogen plays a good-natured blob with no brain (“Turns out you don’t need one”). No great stretch for him there, then. Stephen Colbert turns up to give the film’s best performance as The President. First contact twixt him and the huge alien spaceship upon its first arrival is the single biggest laugh-out-loud moment in the whole movie!

And so this motley crew is unleashed to join in combat with the VAST alien robot lumping its way across America. It’s worth noting, at this point, that there seems to be some rule presently being adhered-to in Hollywood, that all cartoons must be in 3D Gimmick-o-Vision. Well, that’s just slappy for the people for whom 3D works, but my eyeballs aren’t wired right, I guess, because 3D films are just blurred to me. So I go and see them in 2D. Therefore, the steady stream of sharp pointy things being stabbed at the screen to remind the idle-brained that they have (in all likelihood) paid extra to get that extra dimension, are nothing more to me than a bloody annoyance. I want to see films that have some legs, that’ll still be being watched when 3D Desperate-Attempt-o-Scope has justifiably faded once more into memory. To Monsters vs Aliens’ credit, it gets its blatant stabs at making stupid people scream early on, and after that uses the 3D to emphasise the sheer scope of the story being told.

So, when a giant Weeble is stomping through the city and the tiny-by-comparison Ginormica (Susan) is running from it, the sky-scrapers between them give you a real sense of scale and, above all, depth. This is intelligent use of the new technology to add to the narrative, to make the experience of watching the film on the big screen all-the-more immersive, rather than just using it as a pathetic excuse to make the viewers duck, as last year’s Beowulf seemed content to do.

The visuals here are exquisite, the designs, both alien and terrestrial, are a thing of beauty but the characters are ciphers we’re so familiar with as to be contemptuous of. The nasty humans / nice monsters motif has been flogged to death a gazillion times before so, even the twelve-year-old I saw the film with could see the major plot-points being telegraphed ages before he was supposed to and commented how the let’s-rescue-Susan-from-the-alien-spaceship storyline was lifted almost intact from The Wizard of Oz (1939).

This film is very aware of its pulp predecessors and quotes them cheerfully and without remorse but, unlike, say, The Incredibles (2004), it doesn’t explore, analyse, interpret or develop its sources, it just quotes them and then smiles expectantly at you, waiting for approval.

So the voice actors do the best they can with indifferent characters and a limp, unfocussed script, but its an uphill struggle against which they ultimately fail. I think it’s fair to say that the designers, the animators and the actors have all been let down by the writers. But then, when you check the credits and see that there are five credited writers, suddenly the problem becomes clear. As is so very often the case with ‘High Concept’ movies, they are developed by committee, which means any spark of originality, any unusual, new, non sequiturial idea will be snuffed-out in favour of a compromised less-artistic decision that offends the lowest number of people. Problem with that is, it inspires and excites the lowest number of people at the same time. This is why Miyazaki films have one auteur in charge. This is why Pixar films never have more than two directors up front. This is why a Writer’s Room (which works fine for an on-going TV show once the characters have been created and the rules set) will never be a substitute for the vision of a single all-seeing eye. Maybe the inevitable MvA2 will be braver.