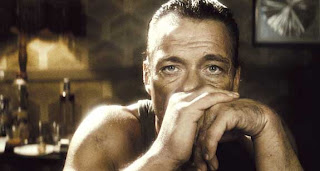 Comebacks are big news these days. Some actors, like Julia Roberts for example, have hardly been away long enough to warrant calling their latest work a ‘comeback’. In the case of Jean-Claude Van Damme, he never even went away … we just stopped paying attention to him.

He’s been churning out straight-to-DVD films on a fairly consistent basis since he fell off the big screens round about the time of Maximum Risk (1996) As with Bruce Campbell’s My Name is Bruce (with which this film would make an entertaining double-feature) this is a B Movie Legend having a pre-emptive pop at his own work.

The film weaves together two narrative threads, one in the present tense and one in the past tense leading up to the present. In the flash-backs we see JCVD’s career on the rocks. He has lost custody of his young daughter and loses a film job to his arch nemesis, Steven Seagal. His misery is palpable and one feels the genuine heart-felt nature of this self-critique (well, until a spot of research reveals that ole J-C doesn’t have a daughter, just an adult son).

Against this rather glum background, he stops off at village post-office to draw out some money, is turned down by the teller and gets himself caught up in a heist. The police descend on the post-office, hotly pursued by the media, keen to cover the story of the disenfranchised movie-star who has gone off his rocker and taken hostages.

These early scenes, where we’re not sure quite what is going on, are deftly, teasingly handled and make the film most engaging. I don’t think it’s too shocking a spoiler to reveal that J-C isn’t really the bank-robber, but rather a hostage as well, one who his captors treat rather like a performing seal, getting him to perform his kicking-a-cigarette-out-of-your-mouth trick for their amusement. Throughout these scenes, J-C is passive, restrained, almost submissive … he is so depressed by where his life has taken him he doesn’t even have the will to fight two bad-guys whose collective intelligence is slightly lower than that of a sponge.

The lighting is cold and sullen, the music mournful and bluesy, the humour bitter. Essentially this multi-millionaire world-famous movie-star is asking we poor working stiffs to feel sorry for him. Well, at least he does have the common decency to parody his image and his own work but, as when Schwarzenegger did this with The Last Action Hero (1993) one feels compelled to wonder what his actual fans make of this “Sorry I’ve been taking your money and turning out such shit films all these years” confessional.

This movie is shot through with a knowing post-modern sense of self-analysis … never-more-so than in the much-talked-about soliloquy, where he turns to the camera and addresses the viewer directly, pouring his heart out in jumbled, incoherent, half-finished thoughts that were clearly un(der)rehearsed. This is a cry from the heart, with him bemoaning his betrayal of the simple, pure principals of his Martial Art, judging his achievements as being hollow and discussing the confusion he feels in just being himself. He is, in other words, having his mid-life crisis on screen.

Well, I wish he’d had it earlier because this is the most entertaining I’ve seen he being since Hard Target (1993) This is not a film in which he stars, it’s a film in which he acts. Despite all the doubt on show, he obviously knew what he wanted – and he got it – a chance to make his peace with himself and prove that he doesn’t have to keep making and re-making the same unambitious plodding action fodder.

The question is: where will his career go from here? Is this just an aberration before returning to the comfort, and guaranteed income of B-movies, or will he pursue this far-more experimental, far-more-interesting, doubtless far-less-lucrative path?

Myself, I hope it’s the latter, but a glance at IMDB suggests that his next film will be Universal Soldier 3 … Ah well. His comeback was nice while it lasted.
.