LET THE RIGHT ONE IN / Låt den rätte komma in 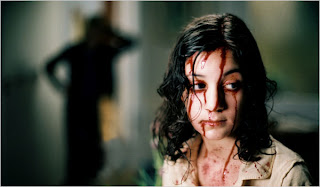 We begin with snow falling through the darkness … which immediately stands as a symbol for the cold, black-and-white world we’re about to enter … a world as often as not seen through windows because it’s simply too cold to be outside.

The black-and-white motif takes us into the woods where the narrow, unnaturally-straight birch trees look like a barcode. They afford almost no cover for The Predator who dispassionately stalks passing innocent victims in the silent snow-blanketed woods. Apparently unconcerned about discovery, The Predator is appropriately sanguine as he strings up his victim, opens a vein and begins to collect the jet-black blood in a bottle. Then a snow-white dog disturbs him and he has to flee the scene.

The Predator uses his knife dispassionately … meanwhile a pale, almost-albino child called Oskar practices using his knife with great passion on those self-same trees. He is being bullied at school for committing the cardinal sins of being intelligent and friendless and rehearses his retaliation when he’s alone. Like most of us, when he’s actually faced with his tormentors, he freezes. Unlike most of us, he keeps pictures of knives and cuts out the newspaper article about the body found hung up in the woods. He is slowly working his way towards perpetrating the kind of high-school massacre we read about with horrifying frequency these days.

Then he meets his new neighbour, Eli, out in the frozen playground in front of their apartments. She’s a lonely teen, like him, and sees in his blank, colourless eyes something with which she can identify. He, in turn, is attracted to her because he may just possibly have found someone sadder than himself. As the midnight snow settles on her he asks; “Aren’t you getting cold?” “No,” She replies casually, “I’ve forgotten how.”

The whole film has an air of chilly, indifferent despair as, I suppose, befitting a world gripped in a perpetual winter night. Everything at the beginning is dead and silent. Well, the dead are typically silent; as it proceeds, this film concerns itself increasingly with some of the ones who aren’t.

Of course, Eli’s ‘father’, Hakan, is The Predator, who next, unwisely tries to tap into the blood of a boy in the gym but is seen through a window and captured. Why is he taking the blood? For whom? Well, you don’t have to be Stephen Fry to work that one out. Or Stephen King, for that matter.

As the still, miserable but orderly world of identical tenement blocks and stocky, unimaginative workers is thrown into chaos, the incidents of violence escalate, the panic sets in, the horror grows and flourishes and, ultimately, destroys families. But those families were only being held together by vodka and habit, so, is the loss really all that great? The film is even dispassionate about its tragedies. The only warmth here is the blood in their veins … and the breath leaking from their lips.

Young Oskar neither notices nor cares about the panic spreading around him, his concerns are purely dealing with those bullies, and clumsily feeling his way through his first friendship. These are matters of earth-shattering import to him, as they are to any child and the inexplicable foolishness of adults is something best ignored. But Oskar is redeemable, we know this because of his relationship with his mother, the one glow of warmth in his life, which is beautifully illustrated in a mime scene when they simply clean their teeth together. This is a moment of great cinema, where nothing need be said but everything important is shown.

Of course, those aren’t the teeth Oskar is really interested in.

For obvious reasons, this film reminded me of Cronos (1993) in that it shares the eerie, uncomfortable, disturbingly human air of Del Toro’s breakthrough movie. Let The Right One In would, however, have been better served by being released in the depths of winter, hitting our screens in the budding of spring puts it curiously out of step with its audience and drains it of that depressing dread which it feeds upon and which, lets be honest, stalks this land every January.

As the two narratives draw closer together, the friendship of Oskar, the death-toll in the town, all revolving around the elusive Eli, you sometimes you get glimpses of her as she really is, just a split-second here or there, just enough to understand her pain and desperation. Similarly, the violence which surrounds her happens swiftly, in the distance, catching you unawares and offering just fragmentary images which imprint themselves on your mind like a warm hand-print on a cold window.

In the dark, Let the Right One In bears a dignified hopelessness, but when the sun finally rises, the harsh chill light affords the film a ray of bitter hope. This is the best, most complex horror film I have seen since Darabont’s The Mist (2007), a film to which, after a repeat viewing, I may even decide it is superior.

Director Alfredson is a clearly a film-maker to watch. I hope the similarities to Guillermo Del Toro don’t end here. I look forward to more films from him, more careful, thoughtful, dreadful work which lulls you into an entirely appropriate sense of insecurity, then still manages to creep up behind you and bite you when you’re not looking.

Email ThisBlogThis!Share to TwitterShare to FacebookShare to Pinterest
Labels: foreign language film, horror, LET the RIGHT ONE IN, vampires