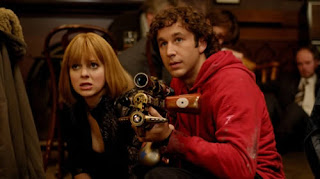 .
After almost twenty years in the having-an-uninformed-opinion-about-movies-because-I-can business, I have learned there is one universal truth about film distribution in this country: Some films are released after months of preparation and anticipation … some films just escape when no-one’s looking. Frequently Asked Questions About Time Travel is definitely one of the latter. I’d never heard of it until the day before seeing it.

This zero-budget British sci-fi comedy … sorry, SF comedy … is an underdog even by British film standards. Creeping out of the shadow the rightly-feted Shaun of The Dead (2004) and the wrong-headed Lesbian Vampire Killers (2009), with more than the occasional glance across the water to the works of That Kevin Smith, this film wears its science fiction fan credentials with pride.

Chris O’Dowd (in his second movie in two weeks – after The Boat That Sank) plays Ray, while Marc Wooton (BBC 3’s Shirley Ghostman) is his creatively frustrated friend, Toby and Dean Lennox Kelly is the long-suffering sceptic, Pete, who goes along with their mad ideas just because they’re his mates. In the film’s opening scenes, Ray comes across as the most sympathetic a depiction of a science fiction fan as I’ve ever seen outside of an actual convention hotel. He, like most ‘serious’ SF fans, absolutely hates the term sci-fi, as popularised by Forry Ackerman. He, like many SF fans, is overly intelligent and under-occupied with life. He, like some SF fans, has only male friends and limited experience in conversing with women. Which is why it comes as a pleasant surprise to him when young, American and not significantly un-attractive Cassie (Scary Movie’s Anna Farris) strikes up a conversation with him.

Now, reading that description, many a dedicated SF fan is going to be dusting off their Umbrage in anticipation of taking it with them when they leave, because there is a real sense of pre-emptive antagonism amongst SF fans to the disdain of ‘mundanes’ as some of them still feel compelled to call non-fans. It is assumed, by SF fans, that all references to them in the mass media will be negative ones. Certainly, there is a lot of precedent on which that belief is based. The legendary SF commentator Dave Langford’s monthly newsletter Ansible typically includes a section called ‘As Others See Us’, which invariably contains some gross misrepresentation of the genre perpetrated by those so-called literati who are attracted by the exotic ideas of SF, but are simultaneously repelled by the cultural association. Against such a background it is not surprising, then, that SF fans, who tend to be astute, analytical and very-well-read both within and without the genre, have learned to expect misplaced disdain.

Of course, the reality is that any gathering of SF fans is no more or less inviting to the uninitiated than a gathering or accountants or golfers or fly-fishers. Yes, SF fans are ‘weird’ when seen from the outside, but no weirder than any clique which has its own traditions, habits, jargon and interests. Personally, I find the company of people with imagination, intelligence and the wit to articulate both a hell of a lot more interesting than, say, an afternoon trapped on the terraces with hundreds of aggressive, over-stimulated ignoramii hysterically bellowing insults at the opposition, the ref and each other. But that’s just me.

Meanwhile, back at the plot; Ray and his mates emerge from the cinema, having watched A Boy’s Life (I won’t insult your intelligence by telling you what that’s a reference to) before wandering over to the pub (The White Horse, a subtlyelliptical little nod to the book Tales From The White Hart by the recently-departed granddaddy of British SF, Arthur C Clarke).

Here, the afore-mentioned Cassie confesses she’s a big fan of Ray’s and what an honour it is to meet him. Like the equally star-struck Rufus in Bill and Ted’s Excellent Adventure (1989) she’s from the future and her job is to “repair time leaks”. Ah, methought, now that’s a bit like Gilliam’s Time Bandits (1981), then Cassie warns Ray about The Editors, who travel through time finding important people and killing them. Surely not Timecop (1994) too? Heaven forbid.

Ray, not unreasonably, assumes that she’s been put-up to saying all this by his mates but very quickly realises that she’s telling the truth when we get the introduction of the time-travelling toilet which projects the three friends into various different alternate futures, both near and far, without ever leaving the pub. Then there’s the inevitable running around trying to avoid bumping into alternate version of themselves (à la Back to the Future Part II, 1989) and, to be fair, quite a lot of incident for a film set almost entirely in one room.

I understand why budget limitations have made the film-makers think, wisely, on a small scale. Small cast, one main location, limited number of special-effect shots, etc. That works well enough on the two-camera TV shows director Carrivick has spent the last decade helming, and it can be done well on film. But there’s no excuse for under-written or poorly-timed dialogue in a comedy. The story is intriguing and there are a few clever lines in there but, ultimately, I came away from the film with a hankering to see these ideas done better.

The dilemma of the film’s latter part is simple and intriguing: is a good idea worth dying for? For an SF fan, that’s a potentially fascinating conundrum. After-all, the foundation of most of the negative criticism of SF is that it tends to prioritise ideas above characters, technology above humanity. Whilst this is true of much bad SF, and even some good SF, it certainly isn’t true of all SF. But it is true of this film.

Despite a sterling attempt by Kelly to make Pete believable, we simply don’t care about what he goes through lost and alone in the time continuum. Which is a shame because, in his appearance as William Shakespeare in Doctor Who (2007), Kelly succeeded in coming across as both complex and charismatic, but there’s nary a trace of that here. Indeed, with the honourable exception of Ray and his mischievous little smirk, none of the characters in this fourth-dimensional tale rise above the level of under-written, one-dimensional clichés.

No matter how large or small the budget of a film, the writing of the script is the cheapest and most important part of the process. Here, the script needed a lot more work, not on working out the logistics of the various alternate futures, but on developing sympathetic, warm characters to escort us through all those narrative complexities. The reason Shaun of the Dead (the film from which FAQ clearly lifted its pub setting) worked is not because Pegg, Frost and Wright are the biggest horror movie fans and could therefore pack their story with loads of deliberate references to other films, nor even because they are exceptionally gifted comic writers (although that clearly didn’t hurt), but because they took the time to develop and write multi-faceted characters with lives and histories and personalities with which we could identify. Simply put, they made us care about their characters before putting them in harm’s way. That makes for good drama and for good comedy.

The irony of Frequently Asked Questions About Time Travel is that it’s about history repeating itself in subtly different ways yet, if you’ve ever seen Shaun of the Dead, Doctor Who, Bill and Ted’s Excellent Adventure, Time Bandits or Back to the Future Part, you’re going to spend this entire movie experiencing that all-too familiar sense of déjà vu.

Or did I mention that already?