MY NAME IS BRUCE 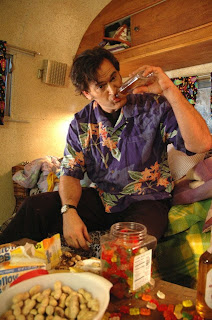 Well, this one has certainly rushed to our screens. Originally finished in 2007, the film was shown at various conventions, was then ‘beefed up’ in re-shoots in 2008 and now, finally, hurtles onto our screens in 2009. The plan is for it to be released at the cinema in the UK the same week it escapes onto DVD and Blu-Ray in The States. Panic not though, it’ll be on disc here too in less than a month. This is not dissimilar to the release pattern which Bubba Ho-Tep (my personal favourite Campbell film) received. I had bought several friends copies of the region 1 DVD and had worn my Ho-Tep tee for the best part of a year around the office, before people started to comment on it – because that’s how long it took the film to arrive here in the UK. We’ll see if My Name Is Bruce has the same eventual impact.

As a long-time reader of comics, I was interested to see that this film was made by a spin-off of Dark Horse Comics, and written by long-time Dark Horse scribe Mark Verheiden (he who helped come up with the Alien Versus Predator comics some twenty-odd years ago and, by the way, did it far better then than the films do it now). Although, I suspect, Bruce Campbell had more than a word or two of involvement in the drafting of this film since it is, after all, about him.

If you've so-much-as glanced through his autobiography, If Chins Could Kill (to which this film is a sort-of companion) you'll appreciate his wry, self-deprecating sense of humour. Anyone who has seen the Evil Dead films (new DVD editions of which seem to be released weekly) or his legendary turn in the afore-mentioned Bubba Ho-Tep, will know that he isn’t remotely frightened of making a fool of himself. Therefore, there was never any danger that this film would be a vanity project.

Instead, what it is is a deliberately lame, deeply affectionate throw-back to the truly awful straight-to-video horror films of the 1980s, where Campbell first made his name and paid his rent, before CGI monsters and post-modern irony gave such films some measure of legitimacy. Many of the classic 80s tropes are here: the blue lightning, the child whose name ends in ‘y’ (Skippy, in this case) and the plot which is actually a lift from the 1950s.

To say that BC is the only professional actor here is to over-estimate his co-stars’ abilities. He would appear to be the only actor of any calibre. But that is part of the film’s appeal. Judging from the lighting, the framing, the entire mise-en-scene (look it up) you’d think the last 25 years of film making just hadn’t happened. But that really isn’t a problem. It means the film isn’t a victim to all those jump-cut, flash-fame, out-of-focus fashion accessories which have to adorn horror-films these days. It’s a simpler, more traditional piece of work which will doubtless delight the hoards of Campbellites (Campbellonians? Campbellese?) whilst leaving civilians entirely cold.

What we have here is a ‘what if’ Bruce Campbell; a fake shemp version of the Bruce Campbell we know and love (or are completely indifferent to, I suppose), a Bruce Campbell who doesn’t possess the disarming sense of humour, who doesn’t get lucrative bit-part roles in the Spider-Man movies directed by his best mate, who sports an awful line in Hawaiian shirts and, therefore, doesn’t have the self-respect of a dog. He lives in a beaten-up trailer, he drowns his considerable sorrows in Shemp’s Old Tyme whisky and he rages at the world. This Campbell is, to put none-too-fine a point on it, a real schmuck.

The story, if one can call it that, begins when Campbell’s number one fan, Jeff, arrives at his trailer door. Jeff’s hick-home-town of Goldlick is being terrorised by a resurrected Chinese spirit called Guan-di (oh, that old chestnut) so Jeff, who’s not the brightest button (not that this Campbell is any Nobel laureate either) kidnaps Campbell and takes him home so he can save the town, population 339 and falling … You see, he thinks that his hero is a real hero. Fortunately, the ego-maniac Campbell convinces himself that this is all a big set-up for his birthday, so plays along cheerfully.

Finally, after a leisurely and fairly uninvolving first act, the story gets going with a few comedy death-scenes (most notably the omni-present Ted Raimi’s) and plenty of cracking Campbell put-downs. But, even here, the film never manages to emerge from the shadow of Bubba Ho-Tep, not that I’m convinced it’s really trying to.

Bruce Campbell is always worth the effort, but here his talents as an actor are not brilliantly showcased by his lesser skills as a director. Ultimately, the film is little more than an amusing diversion, which never quite manages to be as charming as it thinks it is, since it is focussed very clearly on appealing only to those who already know and love Campbell’s oeuvre. The film is peppered (though not full-to-over-flowing) with references that the fans will love but, oddly, My Name Is Bruce’s most obvious influence, reflected first in its use of townsfolk-singers as a sort of Greek chorus, is Russ Meyer.

The supreme irony, then, is that this film, which is so clearly designed to go straight-to-video, is getting a theatrical release where it will be unleashed on an unsuspecting and ill-prepared mainstream audience. One could look upon that as professional suicide but, as Campbell himself would say, “It’s only suicide if I die!”
.
You’ll find more info about this movie and its eccentric release pattern at the official website: http://www.mynameisbrucemovie.co.uk/
Directed by: Bruce Campbell.
Written by: Mark Verheiden
Starring: Bruce Campbell, Ted Raimi, Taylor Sharpe, Ted Raimi, Grace Thorsen, Ted Raimi
Cert: 15
Dur: 86 mins
image © Anchor Bay Entertainment
Posted by Cellulord

Email ThisBlogThis!Share to TwitterShare to FacebookShare to Pinterest
Labels: comedy, horror, MY NAME IS BRUCE