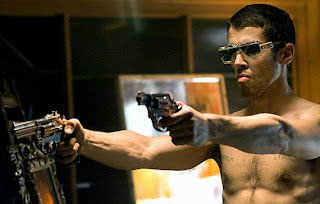 Not so long ago, if a British film was to have any audience at all, it had to be based on some unread literary classic and feature Helena Bonham-Carter in a bustle. It had to sweat heritage and breathe the foetid air of worthiness. Nowadays, thankfully, such films are consigned to memory and reduced to being watched by the characters in a cheeky little gangster movie. RocknRolla is very definitely not about the way Britain used to be … it’s about the way Britain could (and maybe should) be, right now.

The opening monologue tells us that “London is on the rise” and demonstrates this with shots of the glass sepulchres which have sprung-up around Thatcher’s Isle of Dogs pyramid. This will serve to remind anyone as long in the tooth as myself of The Long Good Friday (1980) with its tale of the underworld’s attempts to break through into the daylight of legitimacy. So, we know from the get-go that we’re in familiar Guy Ritchie territory.

Like the characters he loves and the city in which he houses them, Ritchie’s films are all about flash, shiny exteriors hiding dark, violent interiors, seen from a non-judgemental, humorous perspective and all shot through with a deceptive intelligence.

Whether Tarantino’s coiled-spring breakthrough film, Pulp Fiction (1994) or Danny Boyle’s hallucinogenic, energetic Trainspotting (1996) gave Ritchie the inspiration he needed, or merely the permission, to unleash his first full-length feature, Lock, Stock and Two Smoking Barrels (1998) on an unsuspecting world, is a moot point. His films still have a vibrant aesthetic, filled with crowds of primary-colour characters whose stories thread in and around each other like coils of live wire. One becomes lost in admiration for the way complexity upon complexity is woven into the fabric of the film through the kind of editing which I have (especially with the much under-valued Revolver, 2005) held up as a master-class in the form. Very few films are as well cut as a Ritchie film.

Visually, everything is shot through with metallic hues, faces shine like chrome, to reflect the grandeur of modern architecture around them, or burnished brass in the more modest flea-pits and dives, turning to verdigris green as the story’s tone turns sour. What a boon to the visionary director digital colour-grading has become, although I suspect it will be the cliché that, in years to come, identifies films as being “early twenty-first century” in the way that mullets and padded-shoulders mark-out films of the eighties.

So, to the story. Lenny (Tom Wilkinson) is the local kingpin with delusions of gentrification. He is a fixer; he can make new business opportunities happen and all he expects is his unfair cut. With this is mind, he is getting involved in a partnership with new Russian money, in the person of property developer, Uri (Karel Roden).

Around Lenny scuttle the small-time thieves, drug-pushers and general low-lives who wash around the shores of London’s East End, rather like the cray-fish swarm around the shores of the great river Thames. One such motley crew is the self-styled ‘Wild Bunch’, made up of characters like One-Two (Gerard Butler) and Handsome Bob (Tom Hardy). If you only know Butler from his loincloth-wearing “We Arr Sparrrr-tarrrrr” days then you’re in for a bit of a treat. Not least because, it turns out, he’s a dab hand at humour.

Throw into the mix the maguffin of a valuable ‘lucky’ painting we never get to see (rather like the contents of Travolta’s briefcase in Pulp Fiction) which Lenny’s crack-head rock-star son, Johnny Quid (Toby Kebbell) steals, a deceptive sub-plot about an informer and Mark Strong’s typically-majestic performance as Lenny’s enforcer, Archie and you have all the ingredients in place for a movie rollercoaster (a RocknRollacoaster, I suppose).

Of course, the story, however labyrinthine, is all-but irrelevant, it's the pretext to get these characters into trouble so we can watch them figure-out how to escape. Ritchie's frantic camera-work is no-less exotic than we have come to expect but, if anything, he has learned to trust his actors enough to not let his camera-play get in the way of their performances. The joy of this film is in the interplay of the characters and in the pleasure of a well-turned line of dialogue. The funniest and most surprising moments are those which were, I suspect, the most fun to act: Between One-Two and his best mate Bob, before the latter is due to go down for five years.

Ritchie’s hyperreal take on the East End is as fully-realised an alternate reality as that which Dickens created back in the 1830s. Unlike Dickens, Ritchie has no ambitions to ennoble his world by lifting it out of the gutter; he likes it just the way it is, his characters are in need of no imposed salvation, they love the grotty, chaotic world in which they choose to live, and they love each other just as much. There is a modern take on old-fashioned bonhomie and an honour among Ritchie’s thieves. In this sense, his films also have vague resonances of golden-age Ealing satires like The Lavender Hill Mob (1951) and The Ladykillers (1955) or Peter Sellers’ Two-Way Stretch (1960).

The heist and resultant chase they get themselves involved in would not look out of place in any big-budget American action movie, save for the vein of ironic humour which runs through it, because the Americans seem to like their action scenes straight-up. Of course, it’s worth mentioning that Ritchie, despite his tabloid profile, has clearly chosen not to go the lucrative Hollywood-Hack-For-Hire route like, say, Paul Anderson and Danny Cannon before him, but seems determined to stick to his guns. Literally. We’ll see if this remains true for his take on Sherlock Holmes.

Although it probably won’t trouble any awards nights (which is a shame, given the sophistication of the lighting, photography and editing), RocknRolla is one of the brightest, paciest, most erudite and all-round enjoyable films of last year. It’s British and it’s proud.

The extras on the Blu-Ray I watched seem to be the same as on the DVD. We begin with a behind-the-scenes documentary which is, inevitably, more about Ritchie and London than it is about the film. In interview, now that he doesn’t speak Mockney, Ritchie comes across rather like a BBC correspondent, seriously and thoughtfully explaining the present situation in London and articulating its importance to him at this time. I suppose this travelogue will be of interest to the Americans, but for we Brits who are bored of hearing Lahndahnahs congratulating themselves, it isn’t really news.

The really special extra, is the audio commentary. Some commentaries are just people sucking up to the over-paid prima-donnas they are contractually obligated to have endless regard for. Thankfully, this isn’t the case here. Make time to watch the film with the commentary, at least once, you’ll be glad you did.