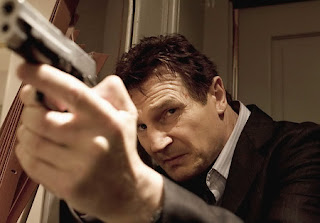 Oddly, even though this film has already hit our DVD shelves, it has yet to make its debut even on the big screen in America. For the time being here in good ole Blighty, you can rent it on DVD or Blu Ray exclusively at y’r friendly neighbourhood Blockbuster.

If you’ve ever seen its fish-hook trailer, you’ll know the basic set-up. Neeson plays an ex-CIA agent who has given up his career to try and be a better father to his spoiled 17-year-old brat of a daughter, Kim. She goes on holiday to Paris, rings him up when she gets there and is promptly kidnapped, which he hears over the phone. He swears to her kidnappers that he will hunt them down and kill them. Which is exactly what he does.

The appeal of the film turns entirely on Neeson’s performance during this key scene. The pain, rage and hard-eyed determination which flash across his face as he hears her kidnap, is an exemplary piece of acting and draws the viewer wholly into his world. At least for a while.

So, it’s a fantasy. A rescue fantasy. Every daughter’s dream of the perfect dad, who will stop at nothing to save her if she’s in trouble. Accordingly, once he arrives in Paris, he pretty-much Jack Bauers everyone who gets in his way. However, the world his investigations lead him into is a dank, dark, disturbing vision of a man-made Hell … the sex slave trade, depicted in a way which, almost accidentally, makes you as uncomfortable in your complacency as Joel Schumacher’s much under-rated 8MM did deliberately back in 1999.

And there-in lies the film’s problem, for me. If Kim had been kidnapped by one of her dad’s old enemies bent on revenge, or as part of a government conspiracy, or by a camp French archaeologist who wanted to put her in a dress, or in any way befitting a rescue fantasy, then this film could have emerged as a kinetic, powerful, brilliantly executed entry into the action genre.

But, instead, we have these superhero fight scenes and James Bond chases set against a background which depicts, in chilling, disturbing detail, one of the greatest evils in the real world.

The background and the foreground just don’t go together. They don’t belong in the same diegesis.

The world of pale, emaciated, near-corpses chained to beds, drugged into incoherence and raped every few minutes until they eventually die is portrayed so convincingly, you just can’t believe in the heroics of Super Dad. You wonder about the girls he leaves behind, still chained-up. You think about their families. You become sadly aware that any world which could invent such atrocity and suffer it to exist, has no room for such super-heroics.

After which, the dénouement becomes inevitable and irrelevant and, I have to say, more than a little ridiculous.

I can’t imagine this film will do any favours for the French tourist industry as it portrays Paris as an open sore, in which nasty and conspicuously foreign bad-guys thrive. The French writer and director take pains to cut their villains from stereotypically racist Eastern cloth, which allows them to wash their hands of any responsibility for this simplistic, highly-polished but ultimately distasteful attempt to exploit the international sex-trade by making an action-movie out of it.

I watched this on Blu-Ray. The sound is awe-inspiring, with bass notes which verge on the seismic. As for the extras, they aren’t very special. A standard-issue making-of is only interesting because it reveals that director, Morel, adopts the Robert Rodriguez method of film-making, by directing with the camera on his shoulder. He apparently shot every foot of this film himself.

There is also a pointless little five-minute package from the French premier of the movie followed by about twelve minutes of alternate camera-angles on the stunt scenes we’ve already seen.

The oddest and, given the text of the film, most distasteful extra is the Real Time Mission Intelligence feature, which allows you to keep a running count of all the people Neeson has killed and injured in the film (I won’t spoil the surprise, but it’s lots) interspersed with the occasional satellite map so you know just where in the world he is. That’s in case all the shots of Paris don’t give you sufficient clues, I guess.
.
Directed by: Pierre Morel
Written by: Luc Besson and Robert Mark Kamen
Starring Liam Neeson, Maggie Grace, Framke Janssen, Arben Bajraktaraj
Cert 15
93 mins
.
image © 20 Century Fox
.
Posted by Cellulord