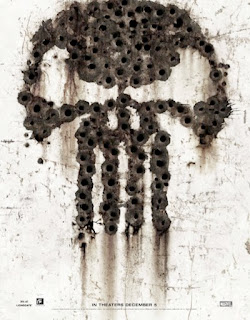 The first version, back in 1989 and featuring Dolph Lundgren, took the elements of the comic that fitted into the eighties action movie format (as well as his limited acting range) and ejected the rest. Taken in the context of the market-place into which it was released, it wasn’t a bad film, just dull and unambitious. Subsequently, it has been identified as one of the worst films of the eighties, but those of us who are old and ornery enough to have been cinema-goers during the latter half of The Decade That Irony Forgot know all-too-well that Worst Film of the Decade was a hotly contested category.

So, we fast-forward to 2004 and the second film version of The Punisher. This, to my mind, is the version which really should hold its head in shame. A huge budget, an A-list bad-guy (in the form of John Travolta), a writer/director (Jonathan Hensleigh) who had had his hands in Die Hard With A Vengeance (1995) then Armageddon (1998), all combined with the best ever Punisher comic books as its source material (the Welcome Back, Frank story arc written by Garth Ennis and drawn by his old sparring-partner Steve Dillon) … how could it possibly go wrong? Well, casting a shiny lump of mahogany like Thomas Jane as your protagonist was a good start.

By refusing to learn the lessons of the earlier film, the dismal second Punisher movie’s failure suggested that the character would be forever a lost opportunity. But, somehow, Avi Arad, over at Marvel, managed to claw together enough money to have another stab and thus we have Punisher: War Zone. Initially intended as a sequel to the 2004 abomination, this film actually took a different direction when Jane tragically failed to show interest in reprising the role (presumably he had a pressing appointment at the French Polishers). So, whilst it, thankfully, doesn’t ‘re-boot’ and do the origin yet again, it is a fresh start for the concept, as you’ll know if you were one of the three people and a dog who saw it during its brief cinema release. I’m sure, however, many more people will find the film in its natural habitat – at home, on disc.

The film makes its intentions clear with its opening scene, giving Frank a satisfyingly violent entrance, hanging upside-down from a rotating chandelier with two machine-pistols taking out a room-full of Mafiosi. The explosive gore will, of course, be ‘uncut’ and ‘extreme’ and ‘extended’ by the time the film hits the home market, but it’s plenty gruesome in this incarnation, thank-you very-much. I must confess I find it interesting that such a violent rendition of such an unashamedly masculine character is brought to life by a female director (Lexi Alexander) and producer (The Terminator and Aliens’ Gale Anne Hurd). Maybe we should allow more women to make movies for men … might be quite therapeutic for all concerned.

Anyway, like Frank Castle himself, Ray Stevenson may appear to have come from nowhere, since his CV was replete with rent-a-heavy roles on British TV before he attracted the attention of Hollywood in the mini-series Rome (2005); yet, it is to his credit that, when he’s not throwing punches and pulling triggers, he manages to inject some humanity into his one-dimensional character, especially impressive since, for the first half-hour, he doesn’t get any dialogue. Over-all, he does very well with a very limited character, although his rather lumpen fight-scenes do make you long for the athleticism and artistry of Jason Statham. None-the-less, I hope he gets the breaks to do some interesting work in future.

The bad-guy this time round is Jigsaw, a character who, like Castle himself, began as a throwaway villain in Spider-Man comics back in the seventies. It’s a shame that Marvel continues with its long-standing and deeply-invidious policy of denying credit where it’s due; so Gerry Conway and Ross Andru, who created the character, do not receive screen-credit for their work.

Although this film is quite deliberately a throwback to those eighties actioners which gave birth to the first Punisher, it has one eye firmly on the contemporary market; emphasising Castle’s obvious similarities to The Dark Knight. Wentworth Asylum stands in for Arkham and Jigsaw stands in for Two-Face and, well, every other nutcase in the Gotham phonebook. Jigsaw’s story, with his patchwork face, cannibal brother and bumbling henchmen is good old-fashioned comic-book pastiche whilst Frank’s story, which deals with his sense of guilt over killing an innocent FBI agent, is Sunday-morning serious. These two narratives play at odds with each other. They don’t belong in the same film but then, it’s worth noting, they are taken from opposite ends of a thirty-year Punisher continuity.

The film demonstrates its old-style four-colour-comic roots through the splashes of vivid purples, reds and blues you’ll see in the background, although these also gave rise to memories of Dick Tracy (1990), whilst other elements reminded me irresistibly of Darkman (also 1990), The Warriors (1979) and even Commando (1985)

Despite its many short-comings, Punisher: War Zone manages to be enjoyable, amusingly gory and true to the spirit of the character we know from the page. It doesn’t have an original shell in its magazine mind, but it’s put together with sufficient joie de morte that this actually becomes part of the fun.
.