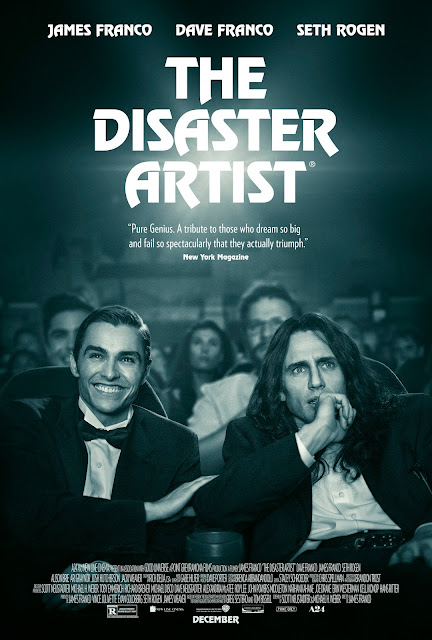 Something very clever is going on with The Disaster Artist.  It’s playing around with reality, with the difference between perceived reality and actual reality ... And where art fits in between those two.  Before I saw The Disaster Artist, I perceived it as a vanity project by James Franco, directed by him and starring himself and his brother - where he would be deriding another vanity project, the legendarily bad film, The Room (2003).
Turns out I was wrong on both counts.
You see, Franco, for all his tom-foolery in scatological comedy films, is actually serious about his art.  And he does consider film-making an art.  And, yes, he is indulging in laughing at the delusions of Tommy Wiseau, the failed actor who made The Room simply so he and his friend, Greg Sestero, could get some screen time; but Franco is also acknowledging that all artists are similarly deluded.  None of them know if they are any good, until an audience tells them.  They all have to risk putting their work out there, in order to know if they are any good.
The truth is that Wiseau isn’t good.  He’s a hammy actor who copies James Dean and Brando without understanding why they acted the way they did - nor does he understand how mannered and histrionic those performances now appear; Wiseau is also a lousy script-writer and he’s a clueless director.  But it’s easy for me to say this, cos I’m not out there doing those things myself.  Franco is more circumspect about Wiseau’s plight because he, too, has done work that is personal and niche, and he has been ridiculed for it - such as the time he appeared in a daytime soap opera.
Wiseau’s perception of himself is actually delusional.  He believes he can pass for a teenager, when he’s clearly in his forties, he believes he has no European accent, when his English is actually quite poor.  He clearly isn’t lying about any of this - he’s made himself genuinely believe this nonsense.
Franco respects Wiseau.  He’s freely willing to admit that the man has some very strange personal eccentricities, and a surfeit of confidence over experience; but that’s hardly a unique skillset in Hollywood.  Orson Welles described the making of Citizen Kane (1941) as the product of “the confidence of ignorance”.  Instead of this being a portrait of ridicule, Franco allows you to feel sympathy for Wiseau; at least his delusion is well-meaning.

Wiseau is portrayed, initially, as charismatic and overwhelmingly confident; so much so that the desperately naive Sestero falls under his spell.  A curiously intimate, rather uncomfortable asexual relationship develops between them (made all the more uncomfortable when one considers that both participants are, in the real world, brothers).  But they continue to perceive their talents as very different from everyone else.  Wiseau’s abundant self-confidence needs an audience and so, inevitably, they head for Hollywood.
Wiseau pitches himself - pathetically - at a producer in a restaurant and is told, in no uncertain terms, “Just because you want it, doesn’t mean it will happen.  It’s one in a million if you have Brando’s talent!”
As we spend more time with him, Franco lets us see that the bravado is really defensive, hiding deep-rooted self-doubt and a persecution complex.  It was about this time that I realised why this story is particularly timely these days.  When a charismatic personality with no discernible skills persuades others to adore him and ignore his many and obvious short-comings, and reacts furiously to any criticism, both real and imagined ... You get President Trump.
Wiseau goes through his dark night of the soul when he has to stop ignoring the reality and finally admits that he can’t have things his own way.  Then Sestero suggests that they should make their own film ... And Wiseau is off again.
There are several moments in this first act, where Wiseau and Sestero’s life and locations mirror those we will later see reproduced in the movie they make.  So we get to see Wiseau’s reality - through Sestero’s eyes.
Then, we’re into the second act - the production of the film - where we get Wiseau’s ‘vision’ - his reality!  We also see behind the scenes of the film production, which is a very different reality - the reality of film production.  Here, actual reality intersects with Wiseau-reality, and there’s friction.  Wiseau is now rubbing shoulders with cynical, professional film people who understand that film-making is a magic trick, a set of techniques and motifs designed to create a certain perception in the mind of the viewer.

This happy band of film-makers-for-hire are led by the ubiquitous Franco acolyte,  Seth Rogan, who begins by pointing out how Wiseau could make the film better - and more cheaply - but eventually does what any sane person would do in that situation ... He just shuts up and takes the money.
Constantly challenged by the limitations of his ability - and the yawning chasm between his ‘vision’ and the reality of the filming process - Wiseau becomes increasingly intemperate.  He is cruel to his leading lady because he read that Hitchcock was cruel to Tippy Hedren, and thinks that’s how you get great performances.  The shooting of the needlessly gratuitous sex scene is, therefore, as uncomfortable to watch as the finished scene is in the finished film.
The crew discuss the way that the script is clearly autobiographical - though, if true, it deals with part of Wiseau’s life from before his first meeting with Sestero and, therefore, is beyond the remit of the film.  What the reality of Wiseau is just gets muddier and muddier.
The third kind of reality here is the restaging of the scenes from the original The Room film.  These are curious in themselves because, of course, Franco has assembled a cast of talented actors who are all pretending to be bad actors - whereas, in the original film, they’re just bad actors.  Or, acting badly might be a fairer assessment, since no-one can do anything that Wiseau doesn’t want.
The fourth kind of reality comes when Wiseau finally watches his finished film with an audience - and they laugh.  He gets to see his work from their perspective, and it hurts him.  He feels genuine emotions - for the first time since he stood on the roof and despaired of ever being an actor.  As with the previous occasion, Sestero rescues him from his depression, by altering his perception into accepting their laughter as a positive response.
The final challenge to the film’s reality comes during the credits, when they roll the original scenes side-by-side with the reshot scenes.  One kind of fake reality playing alongside a pastiche of that fake reality.  This is a moment of pure post-modern irony.  Then, at the end, Wiseau turns up, in person, in a cameo in his own biopic.
Finally, of course, the whole film is filtered through Sestero's perceptions (since he wrote the biography, from his point of view) which is, in turn, filtered through the film production process. In terms of acting, Dave Franco gets the tougher job, because his Sestero is, pretty-much, a regular guy. So he just has to hold on to the audience's sympathy by being normal. The danger is, that could have become boring. It didn't. James Franco, on the other hand, has much more with which to work; many more personal eccentricities, many more characteristics for him to get his actorly teeth into. It's easier to attract the eye when playing someone who his physically and demonstrably different from every one else. It's harder to hold your own when that isn't the case.  Both brothers make the most of the opportunities offered - and director Franco is careful to give sufficient emphasis to the performance of brother Franco.

So, as I said at the outset, Franco is doing something very clever with perceptions of reality and the notion of ‘vision’.  He is surprisingly sympathetic to his subject - this isn’t the cruel savaging of Wiseau that the marketing suggested.  It also isn’t as funny as the trailer suggested - but that’s because it isn’t taking easy pot-shots at its subject.  Instead, it is an honest and heartfelt analysis of artistic compulsion (and, I suppose, the American Dream, blah-blah-blah).
I suspect they felt that they were making a film akin to Tim Burton’s Ed Wood (1994) - indeed, Wiseau reputedly wanted Depp to play him - but, for me, this film is more in the style of a little-seen documentary called American Movie (1999), which charts the struggles of Mark Borchardt, a young man with no contacts, little experience, and no budget, trying to make his dream movie.  That film is also about the restless artistic spirit refusing to be suppressed; it’s also about a film-maker who is determined to live in his own reality.
As should we all.