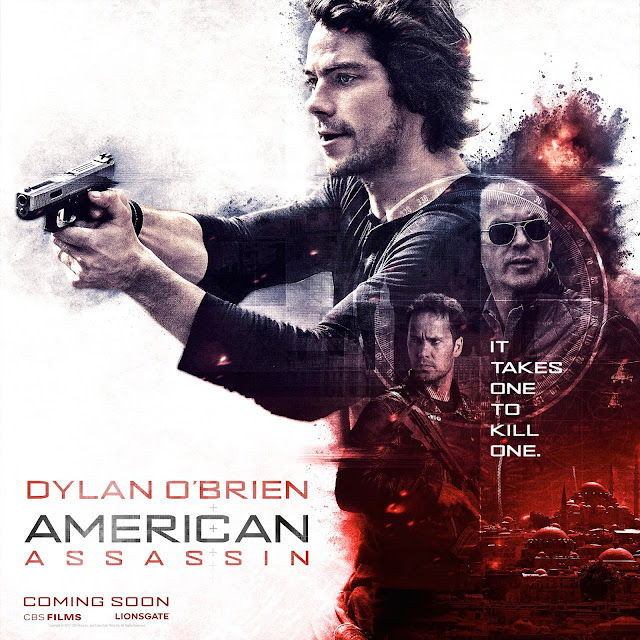 American Assassin begins with a gut-punch, as innocent holiday-makers are mown-down by Islamic terrorists.  It’s a sequence disturbingly similar to the Tunisian beach shooting of 2015.  If that was the starting-point of a film which looked seriously and intelligently at that event and its repercussions, then fair enough, but, instead, it is used as the inciting incident in the creation of a CIA assassin (as the title suggests).

I’m uncomfortable with a real tragedy being used, then discarded like this, especially as the film goes on to build from this gritty, uncompromising beginning to become a globe-trotting yarn that builds in scale to a show-down that dwarfs the ambitions of a Bond movie and would not be out of place in a Marvel superhero film.  The Bourne films at least had the decency to make their villains generic and keep their tone realistic.

Once the story proper gets underway, it involves stolen weapons-grade plutonium from Russia finding its way into the Middle East so, suddenly, we’re on familiar American paranoid spy-movie territory.  Dylan O’Brien plays Mitch, the innocent-victim turned angel-of-vengeance, who attracts the attention of the CIA; he’s very convincing in what is, I suppose, his first adult role.  He gets put in for some training with off-the-leash super-Yoda, Stan Hurley, played by Michael Keaton.

This training sequence is dealt with quickly, and we’re soon off to follow him on his first mission.  The film has a stark, economical style, with little dialogue and an impatient narrative; but this is because the film-makers know that everything here is familiar, that the audience understands the rules of engagement, so they don’t need to waste time explaining or introducing things.

I was curious why Oscar-dodger Keaton took the role as the humourless, no-nonsense senior spy who gets to drill some discipline into Rapp.  It’s a familiar role any once-famous actor of a certain age could have played, really.  I was surprised to see Keaton take it, though, now that his career arc has put his name back above the title for the first time in 20 years.  He's not once-famous ... He's just famous.  Then we got to the sequence where he meets his previous protégé, Ghost (played by Taylor Kitsch); that’s the standout scene in the film, that’s what it builds to and that, I imagine, is what appealed to Keaton.  It’s just one scene - but he gets to dominate it - just as he does in the car scene in Spider-Man Homecoming.  That one scene makes the whole enterprise worthwhile.

As is generally the case with contemporary spy films, this one doesn’t quite emerge from the overlapping shadows of Bourne or Bond.  The fights are impressively brutal, the camerawork and editing are sufficient to the task, and the special effects are sufficiently credible - especially during the explosive finale - but it’s all so very familiar.  American Assassin doesn’t really say or do anything we haven’t seen before.  Shame, really, cos a lot of good work has been done in telling the story well.  I look forward to seeing director Michael Cuesta getting to direct something a bit more inspired and inspiring.