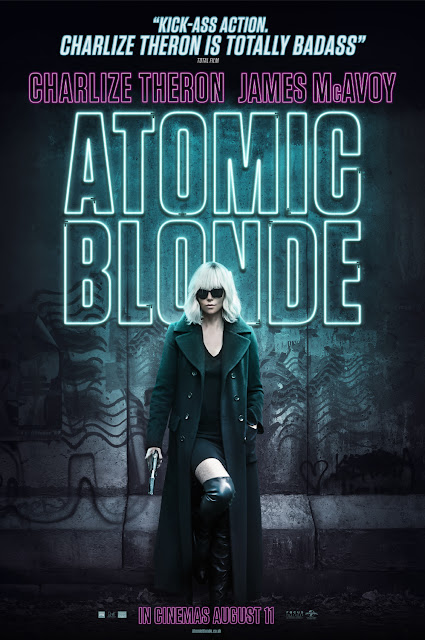 I know it’s not the point, but one of the things which annoyed me about the TV show Stranger Things was that the music was wrong.  All that John Carpenter-esque analogue synth music was from the late-70s, not 1983, which is when the show was set.  It damaged the credibility of the show for me, from the get go.  It told me that the film-makers had a limited knowledge of their period.  It turned out they weren’t even born in 1983.

I had the same problem with Atomic Blonde.  We are told, at the beginning, that this film is set in 1989, in the days leading to the collapse of the Berlin Wall (we are also told that, if you want a film about the celebrations surrounding the wall coming down, this isn’t that film); yet, in its first few minutes, its soundtrack gives prominence to David Bowie’s Cat People (Putting Out Fire) and Peter Schilling’s Major Tom, from 1982 and 1983 respectively.  If you’re going to create a year, and employ music as part of your mise en scène, at least choose music from the right year.  Is that really so difficult?


The film also has a very punk aesthetic, from the stencil and spray-can titles to the Mohican-wearing extras in the crowd scenes.  I’m happy to accept that this late-seventies look was still a thing in Berlin in the late 80s, and the use of the Ministry song Stigmata (albeit in a cover version featuring Marilyn Manson) is perfectly in-keeping with that look.  It’s also bang-on for the period.  As is Depeche Mode’s Behind the Wheel.  These are the sounds that I associate with the wintery days of the late cold war.


Setting this film in that period, and right on the border between East and West at a moment of crisis, at least makes this action movie stand out from the crowd - As does director, David Leitch’s visual fingerprint, which he first planted on John Wick (2014), his (uncredited) directorial debut.  Here he features chilly 80s blue neons and stop-light reds.  The night-time street scenes are bathed in yellow and the nightclubs are livid with vivid greens and purples.

I suppose the film had to be stylish, as it features Charlise Theron as the British super-spy, who brings a wardrobe of glamorous (and occasionally wildly impractical) outfits with her.  She is frosty and emotionless throughout, which is not inappropriate, given the subject-matter.  And, as you might expect from a film directed by an award-winning stunt man, the fight scenes are quite something.  Most-especially the mammoth sequence which seems to have no edits, lasting fully ten minutes, and encompassing several running shoot-outs and fist fights, down three flights of stairs, then out into the street; and it even includes a car chase - all shot seamlessly so as to create the illusion of real-time, edit-free verisimilitude.  Of course, much of the film’s pre-release publicity told us to look out for that scene - which, as spoilers tend to do, somewhat reduces its impact.


Theron is magnificent in these fight sequences, one can barely imagine the amount of work she put into preparing for them.  Now, I’m only too happy to see an action film - a traditional male province - in which a woman gets to be the protagonist and doesn’t need rescuing by a man.  Such films have been far too thin on the ground for far too long.  And, with the empowerment women have finally been experiencing in Hollywood this year, if it is not time for a female action lead now, then when?  I was not unmindful of the fact that Theron’s first fight takes place in a kitchen, and she takes out villains with everything from a frying pan to a freezer door.  No one’s keeping this lady in the kitchen.

But, when we first meet her, she is lying naked in a bath.  We get to see this several times.  At one point, the camera pans, penetratingly up her body as she slowly sticks a microphone wire to her Victoria’s Secrets.  Really?  Is that really necessary?  Yes, Daniel Craig and Matt Damon both had to get topless as, respectively, Bond and Bourne, to show off their muscles and give their female fans something to drool over.  But this is typically quite rare for the men in action films - beyond the inevitable muscle flexing - yet it is typically very common for the females in action films.  If we are to accept Theron as a protagonist, a woman who can cope for herself in the cruel world, do we really need to see her being so vulnerable and passive and naked?  Is that an essential part of her powerful woman persona?


Anyway, back at the cunning plot, James McAvoy is having fun playing against type.  Those pretty blue eyes of his could have ensured a lucrative career as romantic leads and naive heroes but, instead, he plays far darker and more complex characters.  Have you seen his turn in Filth (2013)?  Having shaved his hair off for X-Men Apocalypse (2016), he left it off when playing the fractured psychopath in Split (2016).  Here, with a few weeks’ growth, his ‘Sinead O’Connor hair’, scrubby beard and permanent cigarette-smoke-squint are part of his disguise as the deep-under-cover English spy who may, or may not, have gone rogue.

When the unique action scenes, and spectacular visuals, are out of the way, what we’re left with is a common-or-garden cold war spy film and, just like every other cold war spy film, everyone is betraying everyone else.  There’s always a mole betraying the other spies, and it’s always bleedin’ obvious who that mole is (to everyone except the other spies, of course).  It would be nice, just once, to see a film where that is not the case; but this isn’t that film.
Dir: David Leitch
Script: Kurt Johnstadt (based on 'The Coldest City' by Anthony Johnson & Sam Hart
Cert: 15
Dur: 115 mins
Posted by Cellulord