PETER FALK: IN THE KINGDOM OF THE BLIND … 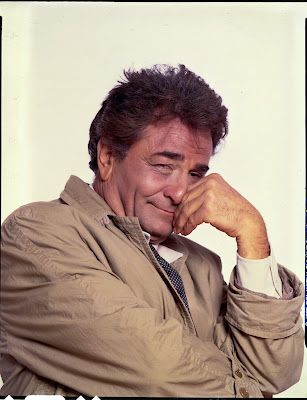 Back in the seventies, my grandad used to love watching ‘Columbo’.  He loved the way he missed nothing and always managed to get the suspect to tie themselves in knots.  “He’s a clever one, that Columbo”, he told me.  Of course, my grandad had never heard of Peter Falk.  Columbo was real to him and, in a way, he was right to think so.
Typecasting is a common fear among TV actors – although, of course, it’s something they all secretly pray for – but there are few who have deserved it and embraced it as much as Falk.  William Link and Richard Levinson may have created Columbo, but Falk owned him.
It was not inevitably so.  Falk wasn’t even the first person to play him.   The character first appeared in the person of one Bert Freed as part of a 1960 TV show called The Chevy Mystery Show, in a one-off episode called ‘Enough Rope’.
This episode was then adapted into the stage play ‘Prescription: Murder’ (where the role was played by Thomas Mitchell – Uncle Billy from It’s A Wonderful Life).  This, in-turn, was adapted back into a TV movie and that’s when Falk got to don the rumpled overcoat.  But only ’cos Bing Crosby turned it down.
In the 1968 TV movie Prescription: Murder, Columbo is quite a different character; persistent, yes, but crueller in his pursuit of his prey’s female accomplice.  He also lies in order to extract confession – something which, in later stories, he would always skilfully avoid.
It would be three years before Falk would get to wear the overcoat again, by which time his acting skills had leapt to a new level thanks to his working with John Cassavetes and Ben Gazzara on the very grown-up and largely-improvised Husbands.  Cassavetes practiced (and taught) The Method, whereby an actor effectively loses himself in his role.  This is something which Falk would increasingly come to do with Columbo.
Both the first Columbo movie and its follow-up Ransom for a Dead Man were directed by Richard Irving (who would go on to direct the pilot for The Six Million Dollar Man) and he succeeded in making them popular enough to warrant developing into a regular series.  The first episode of which was directed by a twenty-five year-old Steven Spielberg.  Wonder what happened to him?

This story:  Murder by the Book tells of a catastrophic falling-out between two murder mystery writers.  I wonder if one can read anything into the fact that this wasn’t written by Levinson and Link but by Steven Bochco who would go on to be show-runner of a little thing called Hill Street Blues?
Indeed, Link and Levinson could afford to take an increasingly hands-off approach to their creation, overseeing the show more as producers than writers, because they knew the Lieutenant was in good hands.
Falk took it upon himself to maintain the quality control of the show – constantly arguing with writers and directors over details which he felt were not right for the character.  Of course, this was partly because he didn’t want the show’s focus taken away from him.  If they’d introduced side-kicks and car-chases it would have made the show more like everything else out there, and less of a study in character development.  It would be less about him.
Falk’s Columbo performances are text books in hogging the limelight.  Some of American TV’s best actors pitted their wits against him – and it is a real case of the actor trying to win scenes off Falk, in exactly the way that their character is trying to beat the Lieutenant.
Actors who came back for more include William Shatner, Robert Vaughan, Ray Milland and Patrick McGoohan (who turned up four times, directed a couple of later episodes and even wrote one).  Falk also wrote one of the latter episodes.

What is the appeal of a detective who is never wrong?  What could possibly hold our attention through sixty-nine virtually identical episodes over thirty-five years?  It’s Falk.  It’s his eccentricity, his patience and his intelligence (often well-disguised); it’s his humour, his modesty and his politeness.  One of the most delightful things about the show is just how gentlemanly it is.

Like Agatha Christie’s greatest creations he is always very polite to his victims who, in turn, are gracious in admiring the tenacity of their captor.  But Christie’s stories were always set in a fantasy version of the 1920s.  Not Columbo … He was contemporary.  Indeed, in his very last outing – Columbo Likes The Nightlife, he found himself investigating 21st century nightclub culture.
There is a cosiness to the killings in a Columbo story, which is why they invariably crop-up on afternoon TV in a generally uncut form.  They’re harmless homicides.  Safe for the whole family.
Whenever I watch Columbo, I think of my grandad, perched on the edge of his Windsor chair, rooting for the little rumpled detective.  He and I would watch the shows together and, despite the sixty-year age difference, we’d enjoy them equally.  We’d celebrate together when he hesitated, turned in the doorway, uttered the immortal line: “Just one more thing” and casually delivered the knock-out blow that would break down the killer’s defences.
You know that moment is coming, you may have even seen the episode so often you know exactly what is going to happen, but that doesn’t diminish your delight in watching the fly enter the trap one more time.
Given that I associate Falk with my grandad, imagine my delight when, now an adult myself, I saw him turn up in The Princess Bride as the unnamed grandfather of Fred Savage.  Their bickering over whether or not it is “a kissing book” is so beautifully observed it lifts what could, otherwise be an (albeit superior) piece of pastiche into a film of real depth and genuine affection.
But, for me, none of this is Falk’s lasting legacy.  No, for me that is his starting, unprecedented ‘special appearance’ in Wim Wenders’ masterpiece Wings of Desire.   Here he is told “You look like somebody’s grand-father”   Me.  He looks like my grand-father.   Well, maybe not look … But he certainly feels like him!
Falk plays himself, mulling over life and legacy and Wenders has said he cast him because he “radiated gentleness and generosity”.  Falk said he took the role because Wenders hadn’t written him into the script and so he could, as with his Cassavetes work and, to an extent, Columbo, make the role up as he went along.  After all, he’d been playing Peter Falk all his life!
Towards the end of this film about angels, we learn that Falk is himself an angel; or rather, was once, but voluntarily gave up immortality – after millennia of watching and caring for humans - to experience real life.  He chose the impermanence of mortality.  He clearly has no regrets.
If there is any actor whose calm, warm wisdom suggests an understanding of those existential questions which haunt our unguarded moments, and reassures us that there is nothing to fear, it is Falk.
He is back up there now, among the angels.  With my grandad.

Thanks to the good people at Obsessed With Film - you'll also find this piece, formated slightly differently, here.
Posted by Cellulord