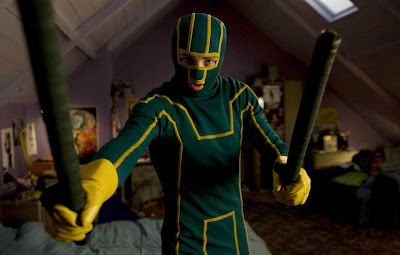 Okay, so, yes, I’ve read the comic.  But it came out so intermittently over the last two years that, reading it an issue every three-or-four months, I don’t feel I fully appreciated it.  I can also barely remember most of it.  Therefore, I approached this film with a keen sense of anticipation and only a vague idea of what I was going to see.
Inevitably, the film heaves with post-modern inter-textual references to other comic-books and comic-book movies, from the Superman pastiche of the opening credits to the strategically-placed Marvel comics in the comic shop and the cinema hoarding advertising The Spirit 3.  But that is not done simply to stroke the egos of geeks; in this case it happens to be a necessity because Dave Lizewski (Aaron Johnson) and his friends Marty and Todd (Clark Duke and Evan Peters) live in the real world, a world where superheroes only exist in comic-books and comic-book movies.
This is why Dave’s opening monologue wryly points out that his origin has no moments of tragic epiphany like that of Spider-Man or Batman.  In fact, it’s not an origin at all.  It’s a life story.  The life-story of a nineteen year-old.
In-keeping with original author Mark Millar’s mission to explore superheroes in real world settings, Dave’s debut as Kick-Ass results in him … getting his ass kicked.  Because, of course, villains in the real world don’t build elaborate machines and have crowds of henchmen aiding them in their bid to take over the world.  They steal innocent people’s cars or deal drugs and, when challenged, stick the knife or boot in.
As Dave is being stretchered off, we are introduced to the film’s other main protagonists, the family of Damon (Nicolas Cage) and Mindy MacReady (Chloe Moretz).  He’s an ex-cop determined to teach his daughter to protect herself, she’s a ten year-old who likes butterfly knives and machine-guns.  In other words, he’s The Punisher mixed with Batman and she’s Robin.  Their world is more violent than Dave’s and less real.  They live in the hyper-reality of a revenge fantasy.  It is not without meaning that script-writer Jane Goldman has made Damon a comic-book artist.  This is the world in which he lives.  It also gives a well-earned opportunity for John Romita Jnr (the comic-book’s co-creator and artist) to get his gorgeous art-work on screen. 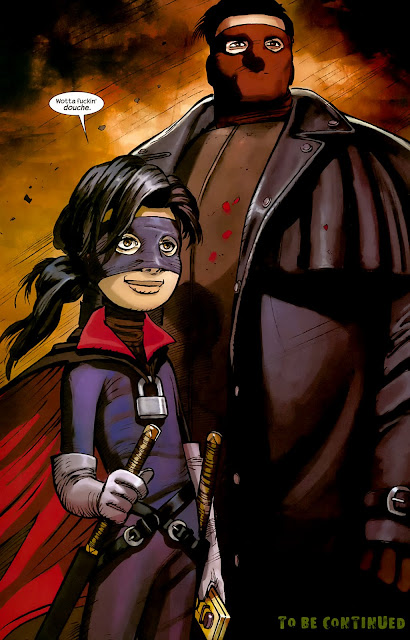 When Damon pulls on his costume – which deliberately echoes Batman’s Kevlar armour, he adopts a very mannered, hesitant vocal pattern.  At first this mystified me, I thought it was Cage trying too hard then, suddenly, it dawned on me: He’s doing Adam West.  Cage, of course, has wanted to play a superhero in the worst way for a long time.  He was pencilled-in to play Superman some years ago but, thankfully, that didn’t happen.  The closest he has so-far come to realising his dream was playing the ludicrous Ghost Rider in the pointless film of the same name (2007).  This opportunity, then, must have come as a gift from the Gods for him. 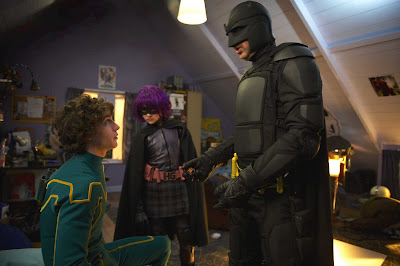 Dave’s full recovery is remarkably swift and the first element of his life that seems unreal but you forgive the film this conceit because, as it proceeds, he gets drawn further and further into Damon’s fantasy and further away from his comic-book reading mates.
The genius of the original comic, carried through even more dramatically in the film, was the idea of Kick-Ass’ heroism being videoed and going viral on the net, making him an instant celebrity.  Kick-Ass, then, is the perfect hero for the on-line generation with their micro-attention-spans.  It’s worth bearing in mind that the comic came out more than a year before Millar’s fellow-Scot Susan Boyle became world-famous literally over-night by the same method.  It didn’t take long for his prediction to come true!
This is a British film (with every frame – apart from some very obvious New York cityscapes – shot right here in Blighty) and a low-budget one.  Some of the locations and special effects betray the lack of money, but such is the joie de mort of the movie, one can forgive it pretty-much-anything.  Besides, keeping the budget down ensured that director Vaughn and writer Millar could get their vision on-screen intact, Katana-wielding foul-mouthed moppet and all!
Mark Strong – British film’s villain du jour – gives his best performance since RocknRolla (2008) as Frank D’Amico, the comic-book villain who Damon has sworn to bring down.  He is the reason Damon’s Big Daddy alter-ego does have an origin with a tragic epiphany.  He is also the father of the wonderfully nerdy Red Mist (Christopher Mintz-Plasse), whose appearance signals the left-turn into total fantasy for the film, and constitutes the greatest deviation from the source book. 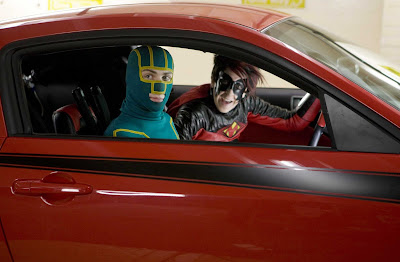 But the star of the show – and a brand-new movie-star in the making - is Aaron Johnson.  I was amazed when I found out that he was English, because he blends-in so perfectly with this American genre with his American friends.  He brings such humour, pathos and out-and-out likeability to Dave that the film’s more outrageous conceits just seem so much more acceptable because he has to deal with them.  If anything, his face is more expressive when he is wearing his mask – possibly because he doesn’t bother with the black eye-liner that has become de rigeur since Michael Keaton’s Batman (1989), which allows his big blue eyes and prehensile eyebrows full reign.
Vaughn has, of course, taken his biggest cue from the source comic book – although the script does stray further and further away from the comic book and, ironically, more and more into fantasy as it proceeds – but he has also taken inspiration from Quentin Tarantino (especially in his excellent use of music), John Woo and Luc Besson in his staging of some phenomenal action sequences.
Like last year’s comic-book masterpiece, Watchmen, this is a film that has found its moment.  The film-going audience is ready to have their super-hero films dissected, just as the comic-reading audience was twenty-years ago.  The film is different to the book, less grounded in gritty reality, but that works.  They are two different and successful interpretations of the same story.  If you’ve enjoyed one, the other will have some pleasant surprises for you!
This film is a gold-plated, pump-action, four-colour crowd-pleaser and it’s loaded for bear!  I can’t wait for the Blu-Ray.
One thing though, one element which just pushes the bounds of possibility too far.  I know scriptwriter Goldman is married to Britain’s richest and most famous comic collector, but the idea that a comic-book geek can have a super-hot girlfriend who also reads comics … nah … That’s just one step too far!
Dir: Matthew Vaughn
Screenwriter: Jane Goldman & Matthew Vaughn
Stars:  Aaron Johnson, Chloe Moretz, Nicolas Cage, Mark Strong
Dur: 117 mins
Cert: 15