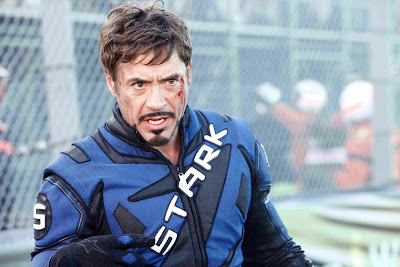 You know how movie trailers sometimes feature shots or lines of dialogue that don’t eventually make it into the film.  Well, Iron Man 2 starts with (or rather without) just such a moment.  The trailer begins with Pepper kissing Tony Stark’s helmet (settle down at the back there) and tossing it out of a plane so he can go after it.  The film proper starts with a far less interesting shot of him standing with his back to us, simply jumping out of said plane.
I understand why I think the scene was cut, because this film has stepped away from the blossoming love affair between Pepper and Tony, for dramatic reasons, and starting with a kiss would play against that.  Favreau himself has a different explanation on MTV.

Movie Trailers - Movies Blog
All will presumably becomes clear with the extended DVD release.
What follows is a probably quite short but seemingly very long sequence of him flying through the dark, for no clearly discernable reason other than it allows one of the AC/DC songs some time to play.  This feels like a compromised moment forced on director Favreau by the producers who had agreed the product-placement deal with AC/DC’s management.  It isn't even the DC's best track.
I have to say, given the amount of sound and fury created over the inclusion of the AC/DC music, it’s the  music from The Clash that really stands out as being effective and appropriate.  So, stick that in your cannon, Angus.
Not an auspicious beginning.  This misstep is then followed by an extremely long exposition scene where Stark essentially retells the-story-so-far for those who have forgotten the first film.  Fortunately, this sequence which, at first, seems like another bad idea, is actually serving several purposes.  Exposition, yes, but it also introduces the central location of the film: The Stark Expo and introduces the key theme of the film: the notion of making peace with one’s father.
Meanwhile, we are introduced to Ivan Vanko (Mickey Rourke on effortlessly fine form) who, like all the best bad-guys, is motivated by a very deep, very real need to defend and redeem his family name.  He believes that his father was thrown down into the poverty in which he died because of Howard Stark (Tony’s father) and he is determined that the punishment for the sins of the father will be visited upon the son.
So, already we can see that Stark Snr’s bequest to his son has two edges to it, firstly the dream of the Stark Expo and the secret it hides, secondly the nightmare of the enemy in the East.
The early scenes, featuring Stark giving the Senate what for and then giving Pepper his whole company, all remind us of what a charming rogue he is, and how great Downey Jnr’s performance is for constantly persuading us that such an exasperating lothario is the hero.
All of which nicely lays the groundwork for the first meeting between Stark and Vanko and the brilliant first reveal of The Shellhead Suitcase.  Shame the trailer spoiled that moment but hey, that’s what trailers do. 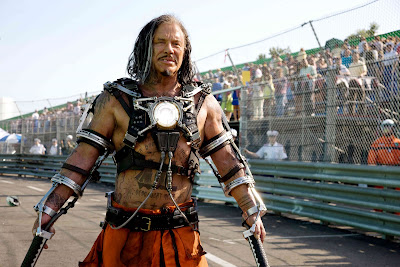 Added to this mix is the jealous and inadequate Justin Hammer, who is a constant irritation for Stark.  As played by Sam Rockwell, he is also just really annoying, with his fake bake and his fake smile and his fake deference.  He becomes a great foil for the unfussy, gruff Vanko; the man who thinks he’s a genius versus the man who genuinely is.
Favreau has built-up his Happy Hogan role and he does, at least, get the biggest laugh in the film when he fights one of Hammer’s henchmen.  But he isn’t simply there for comic relief.  During the Monaco Racetrack sequence, he gets to be genuinely and unflinchingly heroic.  Good for him!
And so we settle into the film’s middle act where, if I’m honest, it goes slightly off the rails.  Stark’s self-destructiveness is, of course, one of his most fascinating characteristics, but, when he successfully and selfishly alienates both Pepper and Rhodey, he is left alone and despondent.  This just seems to happen too quickly and conveniently and is too much of a reversal for the characters.  For me, the ‘Iron Man versus War Machine’ fight with Rhodey just wasn’t convincing.  Very well staged and great to watch, but not really well motivated.  Of course, it needs to be there to prepare the groundwork for what comes later. 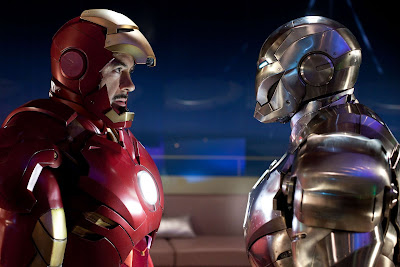 The film is very quickly back on the rails, mind, with the swift intervention of Nick Fury played, of course, by Samuel L. Jackson who has been promoted from end-of-credits cameo to just cool the place up in a small but very significant role in the main story.  He brings a box full of maguffins from Stark’s father.
The idea of having Tony renew his relationship with his father (played by John Slattery) through the films shot in the 70s, rather than through traditional flash-backs, is a genuine delight.  It deliberately reminds you of Walt Disney, sitting on the corner of his desk, talking about the great future exemplified in his EPCOT experiment.  Presumably the Walt Disney connection explains the production designer’s decision to make this sequence look like it was shot in the 50s instead of the 70s.
The message Tony gets from his dad leads him to hand-build his own particle collider in his laboratory, which is a wonderful reminder of the first film and the sheer technical virtuosity Stark can demonstrate when set a challenge.  Lashing things together brilliantly is, after all, what has kept him alive all these years.
The show-down, when it comes, weaves together the multiple threads of the plot in a technically very skilful way, kudos to script-writer Justin Theroux for turning in such a balanced and satisfying conclusion to what is a big, unwieldy bunch of story-lines.
Several threats manifest themselves all at once, leading to huge numbers of explosions, lots of fights within fights, an eyeball-rattling chase and even a quick Odessa Steps quote, all run through with a wry sense of humour that helps get you over the familiarity of what is, after all, just another noisy show-down in just another effects-heavy summer movie.  Be honest, we’ve seen it all before.
Given the cosmopolitan nature of the bad guys and the trip to Monaco, this film reminded me, in parts, of a wannabe Bond movie.  And, given the plethora of bad-guys, there was a danger of it tipping over into Batman Forever, Spider-Man 3 territory.  But, thanks to Downey Jnr’s charisma and Favreau’s easy, confident directing style, it managed to stay an Iron Man film.  The second best we’ve ever had.  Here’s to Iron Man 3.
PS:
Have you noticed I haven’t mentioned Scarlett Johansson’s turn as The Black Widow?  That’s because she literally serves no purpose other than being decorative.  They just wanted to stick her name and undeniably gorgeous face on the poster, so imported an unnecessary character for just that purpose.  Her character was clearly an afterthought so, after some thought, I decided to add her to my review in the same capacity. 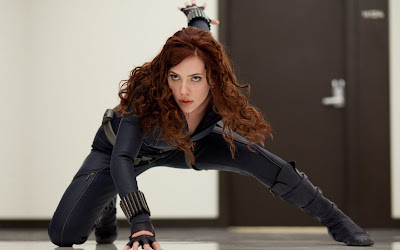