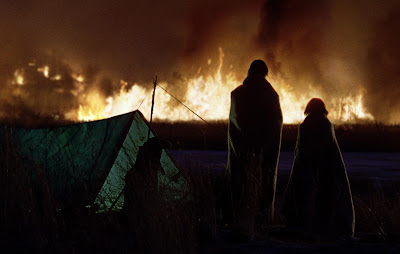 As I write this, I’m listening to Nick Cave and Warren Ellis’ soundtrack on The Spotify.  Its atonal scrapings and wheezings are helping me evoke my feelings and order my thoughts about the film.  I’ve been chewing over this review for some days.  It’s about time to spit it out.

If, however, you come to the film innocent, you’ll have to learn.

The book won the Pulitzer Prize.  I have yet to find a review of it that is anything other than awe-struck and reverential in its praise.  The last time a Pulitzer winner was so universally adored and then adapted into a film was, I think, To Kill A Mockingbird (book 1960, film 1962).  That’s a lot to live up to … which is why, after just one viewing, my thoughts on John Hillcoat’s film adaptation of McCarthy’s novel tend to focus on the differences, which irritated me at first like grit on the tongue, but I am now coming to terms with them.

As I watch the film again and again, as I surely shall, the memory of these irritations will fade and I will be able to see the film as a work unto itself.  Yes, it is different, because that is what a process of adaptation necessitates, but is it better?  No, of course not.  Such notions are irrelevant when you are dealing with a work as subtle and layered as this.  Is it, then, worthy?  Is it a suitable counterpoint to the book, a fitting interpretation and representation of the themes?  Will it break your heart? Yes, yes and avowedly, yes.

McCarthy’s vision is more nightmarish than Hillcoat’s, sketched in charcoal tones, imperfect and indistinct and all the more chilling for it.  Two unnamed pilgrims, a father and son, slowly trudge through the ash and snow and dead leaves of a dead land, also nameless, heading vaguely South … trying to stay ahead of the ever-worsening perpetual winter in which the world is suspended, timeless, unmoving.  Evolution has come to an end, all that is left is the inevitable devolution and decay.

Those who have read the book may be relieved to know that the most grotesque, most inhuman moments in the book (or the most human, depending on your perspective), the starkest realisations of the depths to which civilisation has so completely sunk, the ones that burrow into your imagination and revisit you long after you’ve put the book back on the shelf, are mostly missing.  They would seem too prurient on the big screen, I imagine.

But, of course, what works on the page and in the mind’s eye cannot always be relied upon on the screen.  The book has the chaotic atmosphere of a Bosch painting … take, for example, the description of a passing caravan:

“They clanked past, marching with a swaying gait like wind-up toys … Behind them came wagons drawn by slaves in harnesses … and after that the women, perhaps a dozen in number, some of them pregnant, and lastly a supplementary consort of catamites illclothed against the cold and fitted in dogcollars and yoked each to each …”

If the film had included this image, it would have pushed our memories in the direction of Mad Max 2 (1981), a very differently-purposed vision of civilisation’s afterlife.  As it is, during the film’s few urban scenes, we see vistas of grey tumbledown buildings stretching into the distance, which tweaked my memories of old-fashioned matte paintings of ruined cities from the likes of The Time Machine (1960), Logan’s Run (1976), Damnation Alley (1977) and the Twilight Zone episode Time Enough, At Last (1959) to name but a few.  You see, this sort of thing is common coin in movies and Hillcoat had to take care not to let his road lead him into too many clichés.

Hillcoat’s vision doesn’t have the timeless, placeless quality of the novel and, therefore, the tragic waste is more specifically American and less universal.  I wondered about this, I couldn’t pick out quite what made this so, then I realised … It’s the baseball caps.  The few people they encounter on the road, are usually wearing baseball caps.  In the book the fashion is for rags.  You get descriptions like “Wearing masks and goggles, sitting in their rags by the side of the road like ruined aviators” and “He looked like a pile of rags fallen off a cart”.  In one scene in the film, a colourfully-dressed mother and child are chased across a field by a band of cannibals and it is, for all the world, a moment lifted from any one of a dozen zombie movies.  This film needs the unearthliness Hillcoat brought to The Proposition (2005) but, instead, it gets an occasional unwelcome whiff of Romero pastiche.  The recognisably modern, recognisably American clothes in the film have limited the vision of the book to a specific where and when. 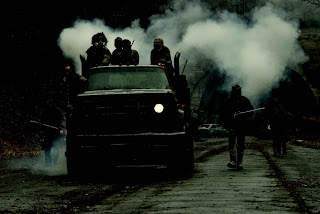 Ironically, the world in the book is blessed with limited vision.  Because of the constant haze of falling ash and grey clouds of pollution the travellers get only rare glimpses of the full scope of the hellish landscape, more familiar are lines like “ … he could see the shape of a house and barn … Shrouded in the carbon fog.”  Often the boy’s young eyes see things older, tired eyes will miss.  But this myopia serves a narrative, tonal and metaphorical purpose: “He looked at the sky.  As if there were anything there to be seen”.

This perpetual haze, too, is missing from the film, but that may have been a visual decision forced upon Hillcoat by the producers, keen to avoid making the film look like Darabont’s The Mist (2007) which was excellent, but died on its arse at the box office.  Never-the-less, we still get an impressionistic world of greys and browns, of bare, broken, dead trees.  We see the tree-line burning in a subtly Biblical way, and the flash-backs to the unstated apocalypse are lit from without by the burning of the world.

The film has a little more narrative drive than the novel and a barely perceptible vein of irony has been added to the film’s last moments (which I won’t discuss, in case you haven’t read or seen them).  Previous to this, one or two things are stated that, in the book, were implied.  The reason why it is important to have two bullets in their gun, for example.

Further, the film displays more overt emotion.  The role of the mother (here played by Charlize Theron) has been greatly expanded, partly, I imagine, for marketing reasons, but also to ground the man in his memories.  The culmination of these flashbacks is the realisation of just how immensely strong the man has been to weather this endless storm, of how Sisyphean a labour his protection of his son is and, therefore, how complete the failure of the mother. In the book, the man is stoical under the weight of this responsibility, he is numb, he has suffered so much he can suffer no more.  This is why he has no place left in his heart for memories.  In the film, he is haunted constantly by his memories.  In the book, he leaves all his memories in the middle of the road and walks way from them.   That had a stark, awful, simple poetry.  In the film, he drops them from a nose-bleedingly tall road-bridge, and this gives the gesture a grandiosity it doesn’t need.

By pointing out these differences, I am not denigrating the film.  I’m sure I will come to love it for its differences as much as its similarities to the book.  It is a different take on a tale which deserves to be told to as many people as possible.  A grown-up, heartfelt, pure tale which tells us more about the power of love than a thousand simpering rom-coms or a year’s supply of silly love songs.

The only sustained dialogue scene in the book to involve anyone other than the man and his son is here brought to life by Robert Duvall, whose rough-hewn, time-worn tones can deliver McCarthy’s lines with the doomy, elusive, terrifying honesty they require.  A perfect piece of casting, there.

And Viggo Mortensen, a man who typically looks as though he bears the weight of the world on his shoulders, is undoubtedly the person I would trust to carry The Fire – the love that binds man and boy together.  McCarthy made him nameless because he is Everyman. Viggo Mortensen is not every man, but looking at the steadfast dread etched in his drawn face, every man must marvel at his fortitude and quietly fear that, one day, we might be so tested and be found wanting. 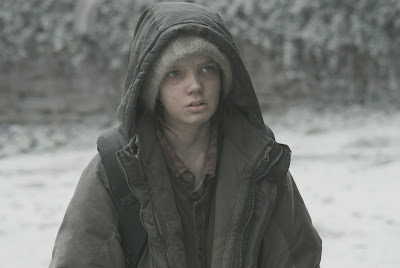 The boy, Everyboy, doesn’t carry the baggage of a fallen world.  He was born during the fires and therefore has no memory of the before.   He cannot know that life was once plentiful and cheap, to him all life is precious.  His father thinks that his son is The Word of God, but his son thinks that of all souls.

The boy is the heart and the hope of both the film and the book.  McCarthy, of course, wrote the book because he became a father surprisingly late in life and wanted to celebrate the fact.  Yes, he chose an odd way to show his love, by depicting it tested beyond endurance.  But then, what other love is there between a parent and child?  As played by Kodi Smit-McPhee, the boy’s mix of deep wisdom and beautiful innocence is far more moving, I felt, on screen than on the page.

For me, the book belonged to the man.  The film belongs equally to them both and, through the film, I realised, that the man belongs to the boy.

If you know the book, you know the end of the road.  If you don’t, you need to know that it will break your heart, but leave you with a newer, fuller heart than before.  For that is McCarthy’s point … if you have a heart to break then you, too, are that rare and precious thing in which his boy believes with fierce, unshakeable faith: You are someone who carries The Fire.  You are a heart filled with love and a soul worth saving!