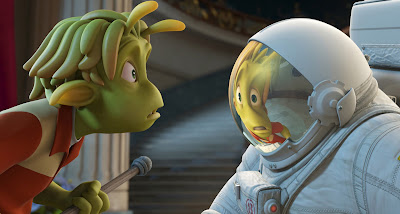 .
Alien is relative. When the big silver spaceships land in the Arizona desert, they’re the aliens. But, when our spindly little space-craft precariously touch down in the deserts of other planets, we’re the aliens.

It’s a simple idea, which Ray Bradbury explored very fruitfully in The Silver Locusts (aka The Martian Chronicles) and which Planet 51 now dallies with.

Capt. Chuck Baker’s spindly little space-craft lands on Planet 51 in a pleasant suburb during the little green version of the 1950s. As with our 1950s, the period is one of extremes: the naïve innocence of the populace contrasting with the hair-trigger paranoia of the authorities.

Chuck has to go into hiding, in the bedroom of the easy-going Lem. What develops, then, is a sort-of E.T. in reverse as Lem tries to keep Chuck secret from his siblings, his parents and the authorities. Obviously, there wouldn’t be much of a film if he succeeded with any of this, so it’s only a matter of time before the streets are teeming with troops and tanks.

Of course, their fear of alien invasion has been inspired by years of our probes landing on their planet. Their movies and comics are full of stories of ‘humaniac’ invasion.

There are a couple of well-devised stabs at merchandising, with the cute Geiger Alien ‘puppy’ and the Mars Rover who thinks he’s a dog. Yes he looks, sounds and behaves very much like Wall-E, but we can forgive the film this as he serves a good solid narratological function … and he’s sooooooo cute!!

The film is peppered with fairly obvious movie references (mostly from Alien – 1979 - and E.T. – 1982 - but with a few additional nods to such stalwarts as 2001: A Space Odyssey – 1968 - and The Day The Earth Stood Still – 1951 - among others) which it doesn’t need, but such inter-textual references are so common-place in films like this, it would almost feel incomplete without them.

Okay, so this film doesn’t really do much that Monsters vs Aliens didn’t do last year, and it certainly isn’t as laugh-outloud funny, but what it does do – is hang together better as a story, all wrapped up in a design aesthetic which has been beautifully thought through.

All of their design is based around circles, and this feeds through everything we see in the film in a consistent and consistently beautiful way. Houses are round, cars are round, even their comic-books have rounded corners.

All of which makes for a well-rounded (ahem), good-looking, good-fun movie with no pretensions to grandeur.

When the credits began to roll, I was surprised to see a stream of Hispanic names so did a little digging and found that the film is produced by Ilion Animation, based in Madrid. The film has unambiguously been made with an eye on the American rather than Spanish market, but invading America makes perfect business sense. When animation is this captivating, it doesn’t really matter where it comes from. After all, alien is relative.