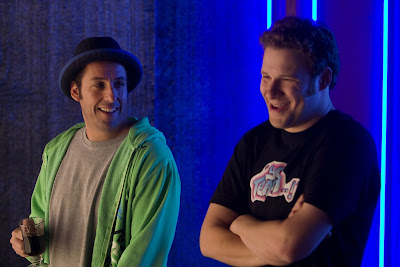 I can’t believe I’m doing this.  I’m about to review an Adam Sandler film.

Adam Sandler: The man who did for comedy what Benito Mussolini did for … flower arranging.

Adam Sandler:  A man who (along with The Farrelly Brothers) drove the American feature-film comedy vehicle down  an intellectual dead end, parked it there, let the tyres down and threw away the keys.

Adam Sandler:  Without whom, there would have been no rise of adult morons  acting like children, no American Pie atrocities, no Freddie Got Fingered abomination.  No Harold and fucking Kumar.

Adam Sandler: he of the whiney, nasal voice and blank, vacuous face that I would never tire of punching.

Adam Sandler: in a film that is about comedy, rather than a failed attempt at being a comedy.

What appealed to me was Funny People’s parentage.  Writer/Director Judd Apatow and Sandler were room-mates twenty years ago when they both arrived in LA.  So they have a lot of history.  Seth Rogen’s Ira Wright is essentially Apatow then, just starting out as a stand-up.  Sandler essentially plays himself now, household name movie star George Simmons who, on the rare occasion he does sand-up, needs someone else to write his jokes.  The only difference is, George has been diagnosed with a rare form of leukaemia.

He hires Ira ostensibly to write those gags, but really just to keep him company.  You see, Simmons is that tragic American hero, the impossibly wealthy, ludicrously famous man living alone in his palatial mansion.  The Charles Foster Kane of comedy.

We’ve all seen the pity-the-lonely-millionaire Hollywood biopic before.  Does this film add anything to the form?  No.  Does Sandler shine any great insightful light into the psychology of the modern comedian.  No.  Do we really care whether George dies and whether Ira learns any life lessons? No.  See, the problem is that Sandler can only act broad emotions, he can’t do subtle, he’s never had to.  Unlike a Jim Carrey or a Will Smith, Sandler does not come across as a likeable, sympathetic straight character and he is incapable of imbuing Simmons with any real depth because, let’s face it, he’s built his career creating characters who have no depth.  Unfortunately, because Apatow is his friend, he apparently can’t see this.

As for Rogen, I struggle to see what his function is in the film.  I understand that his stumbling, unfocussed style is meant to reflect the way we all are in real life, but real life tends to be a rambling mess.  Unfortunately, so is this film.

The film has the feel of Boogie Nights (1997) helped, in no small part, by Janusz Kaminski’s exquisite seventies throwback photography, but Apatow doesn’t have the ability of Paul Thomas Anderson.  Having established his cast of wise-cracking characters, Apatow then forgets all about them for the second half of the film, which seems divorced from the first half, concerning, as it does, Simmons’ attempts to rekindle the relationship he ruined with the love of his life, Laura, played very effectively by Apatow’s real-life wife Leslie Mann.  During this extended aside, Ira becomes a passenger, standing in the background a lot, or playing with the children while the adults go off and have sex. 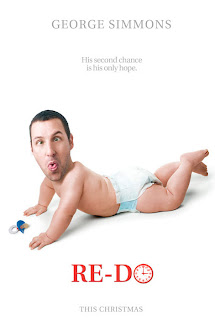 The film which is already over-indulgent at two hours twenty-odd, is also available on this Blu-Ray as an extended version with an extra seven minutes.  Woo.

The saddest thing about this film is that, however satirical it tries to be about Sandler’s alleged comedies, you just know that, with his producer’s hat on, Apatow is prepping to earn big money by actually making Re-Do, featuring Sandler’s head and the lame remnants of his New York accent on a chubby babies body.  Oh, the horror, the horror.

So, Funny People is a mixed bag of half-formed moments and half-drawn characters.  The main reason for watching it is to prepare you for watching the far superior Funny People Diaries documentary that accompanies it on this disc.

This documentary is as much about Apatow as the main feature is but, unfiltered by fiction, it succeeds in being both more revealing and more entertaining.  Apatow’s opening comment to camera is quite telling, he knows this is the only chance he’ll ever have to make a film this self-indulgent, so he’s going to go for it shamelessly.

The process of making the film began with assembling his cast and forcing them to write then perform stand-up routines to, let’s be honest, sympathetic LA audiences.  This comedy boot camp clearly helped put everyone in the proverbial zone, though I must admit it was revealing to see the brain-storming sessions where they only seemed capable of creating dick jokes.

This process set the tone for the whole production, which included improvisational rehearsals which reveal that one of the film’s best moments, Eric Bana’s skin-crawlingly embarrassing routine about Cameron Diaz, sprang from his improv.

It transpires that Bana, who has never played comedy on film, was originally a stand-up in his native Australia.  It’s also interesting, in other scenes, to see that Sandler is quite useful with a guitar and has a lovely singing voice.   So, in some alternate universe, he’s a pop-star and the alternate me doesn’t hate him so much.

One of the delights of this documentary is the inclusion of much more footage of the cavalcade of comedians appearing and playing themselves.  Unlike the characters in the film, these are established, confident comedians who are comfortable enough to actually laugh at each other’s jokes.

This documentary tells you far more about the brutality of a life in stand-up comedy and the anxieties suffered by its practitioners, than the main movie does.  It is worth the price of admission in its own right!

We are also told that the first cut of the film ran to three and a quarter hours yet, oddly, with so much material having been hacked out, the disc doesn’t contain any deleted scenes.

What it does have is:

A series of alternative one-liners, as Apatow continued the improv process even during shooting, often shouting suggestions to his actors from behind the camera.  The diamond in here is Eminem railing at Ray Romano.  A riot!

The inevitable montage of mistakes and corpses that you would expect to have on a set where lines are being added and improvised in an ongoing basis.