THE NATION'S FAVOURITE FILMS OF THE DECADE

So, I decided it was a tad self-indulgent of me to simply foist MY favourite films on you without an organised right of reply.  Time, therefore, to publish a survey.

Obviously, as with any survey, it is a self-selecting process.  One cannot force people to tick a box (imagine the quality of politicians we’d have if you could) so the people who told me their favourites were the people who wanted to.

I polled people at my place of work, in my (for want of a more accurate term) social circle and through Facebook.  This ensured as wide a range of responses as possible.

By the way, all these charts are embiggenable.  Just click on them for a closer look. 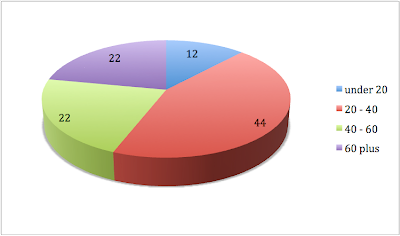 As you’ll see,  I’ve tried to cover an inclusive range of ages, the youngest respondent being 13, the oldest 74.  This doesn’t reflect the socio-economic demographic Hollywood targets its movies at, but then I didn’t just want Hollywood movies to be represented.

As with all the charts here, the numbers are a percentage so, for example, in this chart the share of the respondents in the 20 – 40 age-group is 44%.

Ah, how we all love poncey management jargon.  Since I live and work in the Grimsby / Hull area, it’s fairly obvious that a sizeable proportion of my respondents would too, but I have friends that, wisely, like to keep me at arm’s length.  Although it is worth noting that everyone who responded lives in mainland Britain.  So, the – ahem – geodemographics of my survey goes something like this: 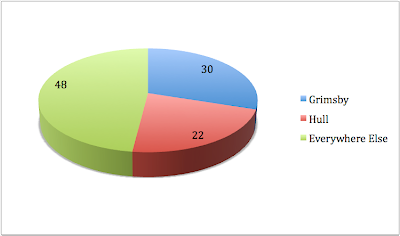 Now, the allegation has already been made to me that this survey will mostly be made up of blokes.  Whilst it is true that men are, at least in my experience, more likely to be interested in comparing opinions about movies, they don’t have an exclusive claim over the medium so, without too much arm twisting, 26% of my respondents were female. 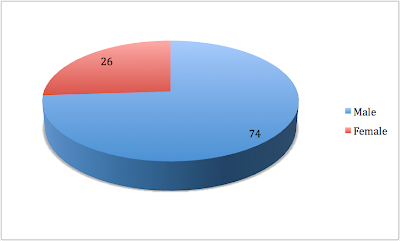 So, enough foreplay, let’s get to the point of this post.

It's over to the Returning Officer for the results of the only poll that mattered in 2009:

For this survey, I simply asked people to give me their ten favourite films of the decade.  I specifically didn’t ask them to rank them in order of preference, because experience has taught me that that is usually fairly mercurial, one’s favourite film one week is one’s second favourite the next … but the choice of absolute favourites is usually made from a fairly small and consistent field.  So the number one might change, but the top ten doesn’t so much.

The results, therefore, do not take into account which of these films are a respondents absolute favourite.  My results simply record how many people included a certain film in among their shortlist of favourites.  In amongst a fascinating range of different movies, there was a surprising uniformity among certain choices, even though the lists were all compiled in isolation and I have kept the developing picture completely secret.  The two front-runners very quickly emerged, constantly jostling for pole position.

Firstly, so they don’t feel left out, the films that didn’t quite make it into the top ten.  They each received  6% or 8% of the votes: 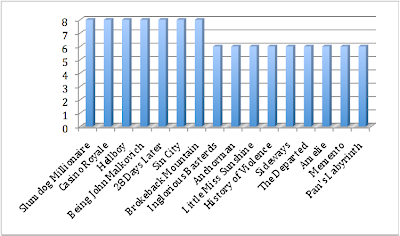 Aaaaaaand finally … the moment absolutely no-one has been waiting for … the results of my nation-wide survey, conducted under strict laboratory conditions!

The ten favourite films of the century so far, as voted for by you the great British public.  As before, the values on the vertical axis are percentages. 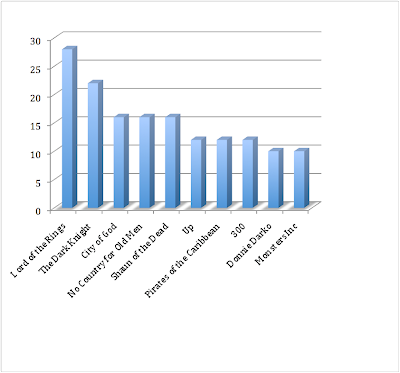 Also, just a point of order, I counted trilogies and the like as single films - so Lord of the Rings is a single film, as is Pirates of the Caribbean, the Bourne trilogy and the Harry Potter whateverology. You get the idea.

Email ThisBlogThis!Share to TwitterShare to FacebookShare to Pinterest
Labels: film lists, Films of the Decade 2000 - 2009