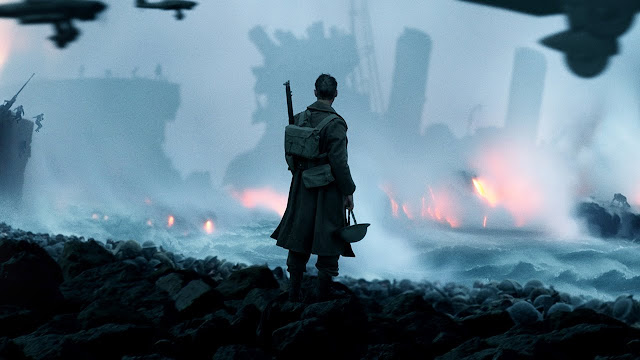 We all remember the beach scenes in Saving Private Ryan (released nearly 20 years ago now, just saying); how kinetic and traumatic they were.  An explosion of violence which rattled the bones and scarred the mind.  That depicted the Allies re-entering Europe.  Spielberg chose to ignore the involvement of virtually everyone and gave the cinema-going world the enduring impression that American soldiers were the only ones storming those beaches, the only ones facing those guns, the only ones dying face down in the surf.
Well, Dunkirk, shows us those same beaches (in essence) three years earlier - when the Allies were leaving Europe.  Again, the focus is very much on the suffering of one country’s soldiers; in this case: the Brits.  But the frantic, panicked pace of those first twenty minutes of Ryan, is replaced with a more morose, contemplative take on the folly of war.
Unlike Ryan, this film’s tone doesn’t vacillate between celebratory and maudlin - it starts off morose, and pretty much stays that way.  Dunkirk has a very Northern European feel about it.  It’s like one of those Scandinavian films filled with miserable, wintery people standing in grey windswept landscapes, shivering.  Tarkovsky films are equally light-hearted.  So, you wouldn’t know that these events were being played out in early summer, as the grey and blue filters on the lenses and the relentless knifing wind give the film a bleak, almost apocalyptically wintery feel.
But then, it isn’t a film about a roadside picnic, it’s about the rout of civilisation, about the thin brown and blue line that stood between Britain and the extinction of our culture ... And how that line was broken.  There are no glorious battles in this film, just a few ugly skirmishes and a couple of aerial dog-fights - which keep us close and in the cockpit, so we can feel the claustrophobic vulnerability of the flyers in their crates.  Nolan wants this to feel like a documentary or - better still - like a lived experience.
Fionn Whitehead initially takes the lead.  His character isn’t named in the film, but is generally referred to as ‘Tommy’; although this, I suspect, is meant to make him appear as an Everyman rather than a specific real person.  From his first moments, Nolan isn’t interested in making the boy charismatic, nor even sympathetic.  He spends the first five minutes of the film running away, and his major preoccupation seems to be in finding a quiet corner for a shit.  Not really the intro to a superhero type!  After this, the boy’s one and only consideration is getting out of there.  He has no discipline, no chain of command, no plan, just a relentless drive to escape.
But nothing Nolan does is accidental.  He wants us, from these opening scenes, to see the soldiers as boys, too young to be burdened with the responsibilities which have been foisted upon them, too confused to understand the significance of what is happening, too scared to think straight.

This isn’t a war film, in the traditional sense, nor is it an anti-war film ... It’s a dispassionate depiction of a complicated and clumsy evacuation.  Coming in at a brisk 106 minutes, the film is terse, one could even say sparse, in its depiction of character and incident.  Like the soldiers trying to shelter from the knifing wind on that featureless beach, we viewers are told only what we need to know - and sometimes not even that.  Tommy overhears the brass helpfully discussing the way Churchill expects only one in ten of the troops to be rescued.  That’s the reality of the situation ... The Battle of Europe was lost and the plan was nothing more sophisticated than to rescue enough soldiers to wage the Battle of Britain.
We are repeatedly told by Lord Sir Kenny Branagh - as Commander Exposition - that there are 400,000 men on the beach - are there are certainly a lot ... But that many?  The scenes of long snaking lines of men, patiently waiting rescue, are iconic (in the real sense of the word) and epic (especially when you understand that Nolan refused to use CGI to fill-out his crowd scenes) ... But those big, bleak, empty spaces don’t feel like they’re hosting almost half a million troops.  I found that strangely distracting ... Possibly because Nolan had gone to such lengths to give his film the ring of truth, and this just struck me as a false note.
Nolan is the heir to the Kubrick “Blank Cheque”.  This was the unique position that Stanley Kubrick enjoyed at Warner Brothers in the 70s and 80s, whereby he could spend as much money as he liked, take as long as he liked, produce whatever he liked; and Warners would patiently wait until he was good and ready to hand the film over ... No American film studio that I can think of, at least since the days of Charlie Chaplin, has invested so heavily in the vision of a single artist, with so little control over that investment.  Given the billions that Warners earned from Nolan’s Batman films (2005, 2008 and 2012 respectively), they have decided to extend him a similar consideration.
Nolan is aware of this, so reflects the debt he owes to Kubrick in the odd symmetrical tracking shot, as well as in the cold efficiency of the story telling.  The characters are given no back-story, sometimes no name, no context and, often, no significant dialogue.  The film is really a montage of moments rather than a coherent narrative.
As a sensory experience, it is immersive and visceral, the sound effects surround you - and, unlike Ryan, it’s not just the rattle of the guns and the percussive thump of the explosions - it’s also the haunting wail of the Stuka sirens, the drumming of a damaged Spitfire motor, the echoing screams of men trapped in a sinking ship.  The lack of dialogue for extended tracts mean that your attention jumps around, taking in everything, filtering nothing.  It genuinely is a sensory overload - particularly when seen on the overwhelming size of an IMAX screen.
Dunkirk is a masterclass in visual story-telling - Through careful positioning of the camera, and editing, he gives us just enough of what we need to follow the various story threads.  Without really being given a lot of clues, we can follow the stories as they overlap at different paces and at different times.
This is experimental film-making - subjective film-making - Nolan constantly gets his unwieldy IMAX cameras up close and personal.  Tom Hardy - as the fighter pilot Farrier - gives his entire performance in close-up, with only his eyes visible.  When Collins, his wingman, ditches, and the cab begins to fill with water, we experience this in the most intimate, physical way.

This being a Christopher Nolan film, he couldn’t resist the temptation to tamper with the timelines.  The three stories take place over a week, a day and an hour respectively and they intercut and overlap, but not in chronological order.  We see Collins’ crash from two different perspectives, but at two different points of the narrative and it’s a classy job of writing and editing that the viewer can still follow this on a single viewing.  The editing also extends and amplifies the drama by cutting away from each story at a tense moment - to extend the tension.
This disjointed structure works with the subjective point of view to make the film immersive and dizzying and, at points, unbearably tense.  Hans Zimmer’s music is a relentless ticking clock - which quickens the pulse and draws the viewer inexorably into the film’s grip.
Mark Rylance is the plucky sailor who answers his country’s call, to sail his little ship over the Channel.  “We aren’t the only ones to answer”  he tells his son.  Really?  Cos we don’t see any evidence of this.  He is literally the only civilian ship making the crossing - In hindsight, I realised that, as Tommy is Everysoldier, Mr. Dawson is Everysailor - standing in for the dozens, hundreds, who answered the call.
Despite Rylance’s typically poignant performance, I felt that this story was the weakest of the film.  There is an unnecessary addition of a melodramatic sub-plot, featuring Cillian Murphy’s unnamed soldier - this really isn’t needed, it makes the extraordinary more mundane.
When Farrier overflies the beach - the lines are short and few and far between.  It really doesn’t look like 400, 000 men ... It really doesn’t.  Anyway, his plane flies overhead, silent, engine stilled; this moment is genuinely eerie.  Then, somehow, Farrier manages the physically impossible - to turn his powerless plane round - without it dropping out of the air - Just in time to do a Han Solo and kill the Hun.  At this moment, the film abandons its documentary tone and ascends to the mythic.
As the film reaches its conclusion, back on English soil, the beaten troops shuffle like zombies down the sidings to the waiting trains.  As articulated by the lad I’m forced to conclude is (in real life) some kind of pop star, there is a sense of regret, even of survivor guilt ... He looks at the people outside the train and bemoans: “We let you down.”  There’s no cheering, no celebrating, not even much relief.
Meanwhile, still over in France, Farrier, the noble fighter pilot, stands alone on the windswept beach, warming himself on the burning carcass of his Spitfire.  This image serves several purposes.  To see the symbol of British victory, the Spitfire, burning on a foreign shore, this is not an accidental image on which to close.  Nolan has not bought into the simplistic, patriotic narrative of the war, he’s shown it as a tragedy inflicted on young, confused, terrified men, whose greatest achievement was simply staying alive.  And Hardy being surrounded by the Germans and taken prisoner ... Well, that just offers up the possibility of Nolan’s next film.
Tom Hardy starring in the remake of The Great Escape, anyone?
Dir: Christopher Nolan
Script: Christopher Nolan
Dur: 106 mins
Cert: 12A
Posted by Cellulord