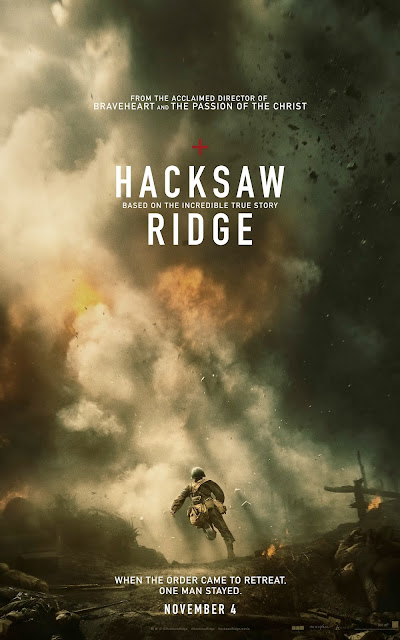 I missed Hacksaw Ridge at the pictures.  Maybe I was demotivated by the Oscar buzz.  Cos films that win Oscars tend to be safe and pensioner-friendly, don’t they?  Also, it’s a soppy story about a religious nut at war, directed by another religious nut.  Certainly one to avoid, right?  Wrong.  Oh so very wrong.  Now the film is out on disc and download: Watch it!
The first time I saw Hacksaw Ridge, I had a vague sense of déjà vu.  The dust and the grit of the battlefield, the sudden explosive and unrelenting violence, the bond between the men and the deep, abiding faith underpinning it all ... It all rang a distant bell.
It reminded me of the Mel Gibson starrer, We Were Soldiers (2002).  This was written and directed by Randall Wallace, who had written the Oscar-nominated film Braveheart for Mel Gibson seven years earlier.

Both films concern themselves with the gritty brutality of war (different wars, but photographed in very similar ways), how this tests decent men, and the effect it all has on their families.  In Hacksaw, the focus is on Doss’ dad (Hugo Weaving), still struggling with survivor guilt twenty years after the First war, and terrified of seeing his sons go the way all of his friends went: straight into an early grave.  In We Were Soldiers, it’s the wives we spend time with, waiting in fear for the telegrams, led by a stoical Madeleine Stowe.
But the similarities are not just thematic; they are woven throughout the fabric of Hacksaw Ridge.  Like the earlier film, when it shows the inscrutable Oriental enemy at all, it shows them travelling by tunnel, and sketches in the suggestion that they, too, are brave and honourable men, fighting for a cause they hold dear.
In the heat of battle, we get blood splashing the camera, in both films; we get God’s eye views of the wounded, we get slow-motion explosions filling the air with dirt and fire.  Repeatedly, the person speaking disappears in a spray of red in mid sentence, by a head shot that snuffs out their life before the sound of the shot is heard.

There is an emphasis on excruciating wounds, particularly leg gore, and on men burning, as well as on the importance of evacuating the wounded.  We get men carried over shoulders.
There’s more:  We get a steely drill sergeant (Sam Elliot in Soldiers, Vince Vaughn in Hacksaw), and a decent C.O. (Gibson himself in Soldiers, Sam Worthington in Hacksaw).
In We Were Soldiers, the journalist, Joe Galloway, (played by Barry Pepper, fresh from his turn in 1999’s Saving Private Ryan) is a non-combatant who doesn’t know how to use a gun.  He co-wrote the book of what occurred in the Ia Drang Valley, in this true story.
In Hacksaw, of course, Andrew Garfield plays Desmond Doss, a medic who won’t use a gun, and who, eventually, told what occurred on that ridge, in this true story.

But Hacksaw Ridge’s lack of originality doesn’t hinder it one iota.  I know literally no-one who doesn’t love the film.  It’s also true that, in almost every way, Hacksaw is the superior movie.  Granted, there is nothing here the equal of the scenes in Soldiers where Stowe takes the telegrams to her neighbours, one by one, to tell them their husbands are dead.  But, otherwise, Hacksaw is all heart, carried by Garfield’s simply, gritty determination and his puppy-dog eyes.
One key difference that’s worth mentioning, is with the way the two films depict the Sarge.  Where Vaughn brings a real human warmth to Hacksaw, in a role that could easily have turned into a parody of Full Metal Jacket’s R. Lee Ermey (1987), Sam Elliott, in Soldiers, is largely thrown away in his rendition of the same role, because his natural humour and charm are missing, leaving inflexible, humourless efficiency.  There’s always something off in a film where Sam Elliott doesn’t have that wonderfully lush ’tache.
Vaughn’s performance is important in setting the tone for what follows.  He isn’t a screaming caricature, he respects his troops.  He isn’t simply trying to turn them into robo-soldiers, he’s someone who understands his men, and understands the sacrifice they are about to make.  It’s significant that he goes into combat with them.
When, early on, the whole platoon is punished for Doss’ pacifism, their revenge against him is quite restrained.  But then, the plot requires us to like these guys and root for them, later on, so they can’t be seen to do anything too monstrous.  It’s quite a trick to swiftly sketch-in a roomful of grunts, all wearing the same uniform, all doing the same things.  But we quickly get to pick out a few characters, and they will see us through to the all-important show-down atop the cliff.  We learn to care for them as much as Doss does.

Hacksaw Ridge wears its heart on its sleeve.  Indeed, it wears most every organ externally at one point or another, as Gibson’s famous eye for gore continues undiminished.  But, despite the eye-watering gore and the relentlessly merciless violence, this is a film which doesn’t sink into exploitation, because it’s a story about inner strength and decency.  It’s a film about faith.  Cleverly, Gibson saves this from being a cloying Biography Channel Sunday-afternoon movie, because he doesn’t lecture; the film isn’t on a mission to convert.  It shows Doss being confused by his own faith, but never conflicted about it.  He doesn’t know why it’s right not to pick up a gun, he just knows it is.  It’s his personal faith, produced by his personal circumstances, no-one else’s.
Faith is a strong thread running through both Hacksaw and Soldiers - in that film Gibson prays with his children at the beginning.  The appeal of this to Gibson is obvious now, less so when the film first came out.  It’s worth saying that it’s an impressive achievement that Gibson put this film together.  Just five years ago, his career was in tatters and his behaviour had reduced him to a comedian’s punch-line.  Yet, he managed to put together the finance and get the production and distribution support for this epic movie.  It probably helps that he still has interests in Icon, the production company he set up in the 90s).  But there’s no denying that he is still an impressive presence on screen (his turn as the villain in 2014’s Expendables 3 demonstrated that), however, for this film, he stayed behind the camera, didn’t even put himself in there as a cameo; and that was a wise decision because, on-screen, he is still a controversial presence; off-screen, not so much (we’ll see if that continues to be the case if he continues with his plan to make a sequel to 2004’s Passion of the Christ).

There was never any doubt that Gibson is a director of considerable skill - Braveheart (1995) demonstrated that beyond any doubt.  Hacksaw Ridge shows that twenty turbulent years have left this ability undimmed.  Maybe he is planning to ‘do a Clint’ and retreat behind the camera for the rest of his career.  If so, there seems to be little downside to that, as he remains a great instinctive film-maker.
The core of this film is the night Doss spends alone on the ridge, and it is a riveting sequence.  It benefits from the character-building of the film’s first half.  It benefits from the way that everyone since Spielberg’s Saving Private Ryan (1999) shoots World War 2; the way they already shot Viet-Nam, as being gritty and dirty and genuinely scary.  This isn’t some nostalgic piece of flag-waving, this is history as it is lived at ground level, minute by minute, heartbeat by heartbeat.
I’ve watched Hacksaw Ridge with film-geek friends, with my partner (who hates war films) and with my dad (who prefers ’em to feature Clint or John Wayne) .  They all loved it.  So, watch Hacksaw Ridge.  Then, maybe go back and give We Were Soldiers another chance.  The two films complement each other!
Hacksaw succeeds in telling an inspiring tale that works for a wide audience!  And I defy anyone to not feel a pricking at the corners of their eyes when they hear the words “help me one more”.