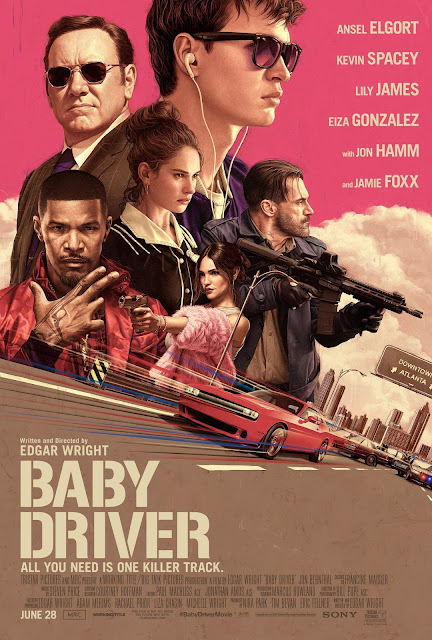 Edgar Wright has reinvented the Film Noir for the 21st century.
Wright, as you may know, arrived in movies via comedy TV, working with Matt Lucas and David Walliams (looooong before they achieved National Treasure Status) and, of course, with Simon Pegg and Nick Frost on Spaced (1999 - 2001).  That led to Shaun of the Dead (2004) and Hot Fuzz (2007), wherein Wright et al took familiar movie signifiers into their own sandpit and played with them their way.  This produced delightful, surprising and illuminating films.
Guess what:  it still does.
Here, Wright plays fast and loose with the generic signifiers of the heist movie, the gangster movie and, yes, the noir.  He’s not the first person to do this, of course:  I still remember sitting in a cinema back in 1992, watching an unheard-of film by an unknown film-maker, playing one of the unregarded afternoon slots in the Birmingham Film Festival.  The movie began with a group of villains in a diner arguing about Madonna songs and tipping waitresses.  It was, of course, Reservoir Dogs, and it was a very, very different take on the crime movie.
No, I’m not saying this film is like that film.  Although Baby Driver does share many traits with Res Dogs, not least its loquacious bad-guys and eclectic use of music; what I’m saying is that re-inventing (or ‘re-imagining’ as I believe the managementbots like to term it these days) the heist move is a noble endeavour which has engendered great results in the past.

It also doesn’t hurt Baby Driver’s chances that the last couple of decades has seen the getaway driver and the car-stunt elevated to previous unimagined heights of fame thanks, on the one hand, to the Transporter series (2002, 2005 & 2008) and the Fast and Furious series (2001 - date), but also because of the art-house fave, Drive (2011).
Indeed, rather like that Ryan Gosling film, Baby Driver features a superhumanly able driver who works for villains out of necessity rather than choice; but he is trying to get out, because he’s got a girl he wants to go straight for.  It’s a familiar trope - best summed-up in Michael Corleone’s “Just when I thought I was out, they pulled me back in” from Godfather III (1990) - but, then, this film is all about presenting us with things we recognise in new and unusual ways.
Baby-faced Ansel Elgort plays the titular chauffer, who has a breezy, cheery demeanour.  Like a lot of people, he has his ear buds in permanently and lives his life to the beat of his music.  For example, he essentially dances down the street to fetch coffee in the film’s opening moments.
The oft-maligned (and overdue for a re-appraisal) Hudson Hawk (1991) introduced the delightful notion of orchestrating a heist to a song.  Bruce Willis and Danny Aiello split up but keep singing, and that way, they stay synchronised.  They could just wear a watch but, hey, where’s the fun in that?

See?  It's ace!  Anyway, Baby uses the same methodology when he drives.  It’s all about rhythm and gear changes, just like the song ‘Bellbottoms’, which underscores the opening car chase.  During this scene and in all the scenes of violence, the action is synchronised to the beat of the music.
This is the way they used to edit pop videos back in the 1980s and editing found footage to the tempo of a favourite piece of music is an established way to teach video editing to Media Studies students.  I’m sure Wright will have done it many times in his youth; just like he’ll have fooled around with mix-tapes.
Baby, likewise, makes mix-tapes.  And I do mean ‘tapes’.  All of his audio kit is out-dated, from the cassettes he records wild track audio onto, to the iPod he has plugged into his ears.  And this retro kit is the first hint that there is something more substantial going on below the stylish surface of this film.
It almost doesn’t need saying that an Edgar Wright film is very clever, that initially comes through in the visuals.  During that scene when he gets the coffee, I’m sure there are loads of easter eggs in the graffiti and in the behaviour/identity of the passers-by, which the pause button will reveal when the film hits home video.

The film also introduces us to some colourful bad-guys.  First off, we have The Crew.  This, like a 70s rock-band, has a floating roster of people who join and leave and rejoin later.  At first, it seems that Jon (The Punisher) Bernthal is going to be the problem for Baby, but this proves to be a nice piece of misdirection on Wright’s part.  Extra colour is provided for the crew by The Red Hot Chili Pepper’s Flea, Mad Men’s Jon Hamm and Kanye West’s Jamie Foxx.
These are all given loads of character traits and ticks to work with - particularly, I notice, throat tattoos - as villains who are variously enigmatic, menacing, manipulative and/or just plain mad.  As you might expect, Hamm particularly shines as Buddy (possibly not his real name), while Foxx gives a fantastic turn as Bats (presumably short for Batshitcrazy.)  You know you’ve got an interesting script, when Oscar-winning leading actors are willing to take supporting roles in it!
The man with the plan is Doc - played effortlessly by Kevin Spacey.  He admires Baby’s skill, even has a soft-spot for the kid.  But then, they have something in common ... They both feel that being a bad-guy doesn’t mean one can’t be civil.  They also value their family and their past.  With Baby, this is symbolised in the machines he listens to music on - machines that he associates with his dead mother (rather like Peter Quill and his Walkman); with Doc this is symbolised by the toy cars he uses to rehearse his heists, toys which he carefully puts away in a box afterwards.
There are a couple of tasteful scars on Baby’s baby face, which are subtle indications of a violent and dramatic past which, in-turn, foreshadows the violence to come.  About half-way through, the film turns on a dime, and we realise that the playful form of the film disguises a dark and troubling content; the strained civility and ritualised normality of the first half falls away, and real threat enters Baby’s life, accompanied by sudden and extreme violence.
We have learned to care about him and therefore, when the things he cares about are threatened, we take it personal too.
There comes a point when things go catastrophically wrong for Baby, and he seems to forget all of his driving skills.  That seemed oddly convenient - insofar as the script needed him to get into trouble and the only way to do it, was for him to forget all the natural, effortless abilities he’d demonstrated in the film’s first heist; which could have got him out of that trouble, if the plot hadn’t needed him to be in it.

That trouble, of course, comes in the form of his girlie, Deborah, who is neither a femme fatale, nor is she a hard-bitten moll; she’s kinda passive, in fact.  Very much a passenger in Baby’s vehicle.  That said, the scenes of them getting to know each other are delightful, and Lily James needs to portray Deborah as being especially vulnerable if the inevitable threat to her is to feel credible.
I’ve called it Film Noir for the 21st century because, like a lot of Film Noir, the main character is a basically descent bloke who finds himself trapped in a spiral of violence, drawn into a criminal world that exists alongside the real world.  I’ve always found a vein of romanticism in Noir - sometimes bordering on the delusional - and that is definitely here in the way that Baby holds on to the belief that he can keep the two sides of his life separate, when we, the viewer, know that the best anti-lock brakes in the world won’t stop the one story crashing into the other.
So, what we have a mash-up (as the young people say) of old Hollywood tropes and new-media post-post-modern film-making techniques, to create a film which feels both very traditional and very fresh.

No, the visuals are not as extreme and the style as overpowering as they were in Scott Pilgrim vs. The World (2010) - that’s a good thing - the dialogue doesn’t quite sparkle like Tarantino’s or Scorsese’s does - but the music ... That’s a helluva thing!  Both Tarantino and Scorsese are geniuses with threading music through their crime movies.  Mr. Wright is now right up there with them!
James Gunn just got nudged into second place for Soundtrack Album of 2017.  I’m listening to the Baby Driver soundtrack now as I type this - find it here, on Spotify.
I’ve long maintained that there isn’t enough Hocus Pocus by Focus in the world ... But following it with Radar Love by Golden Earring was a masterstroke.  So, Wright might not have Tarantino’s ear for dialogue, but he does have his ear for music and, if anything, he makes better use of it.  And, let’s face it, he has form using Queen music to brilliant effect!
One other difference between this film and Tarantino - I actually found myself caring for the good-guys in this film, they became more than just ciphers (which Tarantino can be guilty of) and the bad-guys weren’t so terrifyingly brutal that you feel the need to look the other way - as happened from time to time in Kill Bill (2003, 2004) for example.
Baby Driver is good-humoured and good-natured.  It’s fun from neutral to fifth, but that doesn’t cut into the tension of the dramatic scenes; it just means that, as a viewer, I was more invested in the adventure and, therefore, I thoroughly enjoyed the ride.